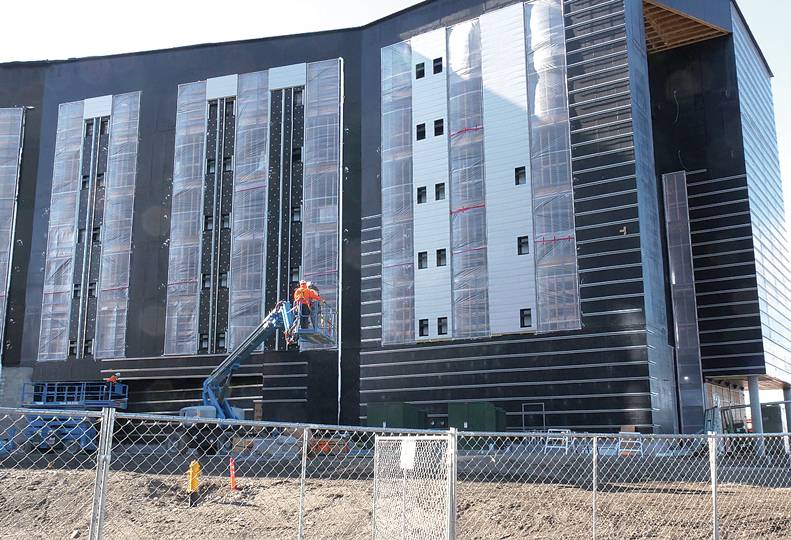 The Kalispel Tribe of Indians is adding new amenities at its Northern Quest Resort & Casino, at 100 N. Hayford Road, in Airway Heights, with construction underway of three new dining venues on the property, a new mobile app for its recently opened Turf Club sportsbook, and the continued expansion of its new five-building hotel wing.

A.J. Prudente, director of construction operations at Kalispel Development, says the hotel expansion is on track to be completed in the spring of 2023.

Plans call for the construction of 192 guest rooms including 16 suites, a skywalk, and a landscaped outdoor plaza. The addition will bring the total rooms at the resort to 442.

The site for the new hotel wing, which will consist of five connected buildings, is north of Northern Quest Drive, west of and adjacent to the current hotel tower. The skywalk will connect the new hotel wing to the northwest side of the existing hotel.

Prudente says plans for a 30,000-square-foot conference space are still under development as his team determines how to best use the space for future guests.

“We intend to remain competitive in terms of site pricing, as well as size and location of meeting facilities,” Prudente says.

The standard hotel rooms will be 350 square feet, slightly smaller, but similar in setup to the existing hotel rooms, including the standing showers and blue night lights.

Sam Askew, newly hired director of resort operations at Northern Quest, claims that once the hotel expansion is complete, Northern Quest will have 50 more guest rooms than any other tribal casino in the state of Washington, including those currently under construction in the state.

The tribe is working with Lydig Construction Inc., of Spokane Valley, as the builder. Spokane-based Integrus Architecture PS is providing architectural services. The Society, a Portland-based hotel interior design company, will provide other design services. Spokane-based MW Consulting Engineers PS, is the mechanical, electrical, and plumbing engineer, and site engineering services are provided by the Spokane offices of Coffman Engineers Inc. and Parametrix Inc.

Representatives of Northern Quest decline to disclose the cost of the hotel expansion.

Inside the resort and casino, three new food-and-beverage venues also are under construction. The first venue to open, East Pan Asian Cuisine, will serve contemporary Asian-fusion cuisine and will open in mid- to late April, Prudente says.

Neon Pizza will serve pizza by the slice in an arcade setting with a ’90s theme. The restaurant is scheduled to open this summer. Then, by late summer or early fall, the resort will open Highball Speakeasy, which will have a modern design theme and serve craft drinks and small bites in a nightclub atmosphere, Prudente says.

“We anticipate bringing Kalispel Hospitality to life with these new venues without the need for an outside operator or a franchise,” he adds.

Prudente says the resort will hire 20 to 40 people in the next six months to add to its food and beverage teams to support the new venues.

Along with the new hotel wing and the food and beverage venues, Northern Quest has developed a mobile app for betting on professional sports through its sportsbook, The Turf Club.

Kevin Zenishek, executive director of casino operations at Northern Quest, says the mobile app will be available in March, either before the beginning of March Madness, or in the second round of the college basketball tournament.

Guests can place bets on a variety of traditional sports at the professional level including tennis, hockey, basketball, football, and baseball, Zenishek says. He adds that when the legislation to allow sports betting was still in process, the only sport to place a bet on at the time was Ukrainian table tennis, so occasionally an obscure sport will become available to bet on as well.

“The law allows for professional level sports, some Olympics, but no in-state college teams. You can’t bet on Gonzaga, the Cougars, or Eastern Washington,” Zenishek says. “And no high school. The idea there is obviously for safety and integrity, so people aren’t trying to compromise younger players who may not necessarily know their way yet and get confused.”

Bets on college-level sports in Washington state aren’t allowed at the sportsbook, even if teams from in-state were playing in a tournament taking place out of state.

Zenishek says about 20 jobs were added for the sports betting operations.

Currently, guests can place bets in-person at The Turf Club, the 2,300-square-foot sportsbook and bar inside the casino, from 9 a.m. to 10 p.m., or at any time of the day at one of the kiosks located throughout the property.

The Turf Club officially opened Dec. 4, and Zenishek says the sportsbook is meeting the casino’s budget expectations, although he declines to disclose specific financial information regarding the venue.

“I can share with you that the take on it is significantly less than the other forms of gaming,” he says. “But it is profitable, and it has provided … a way for the people in this area to make legal wagers on sports.”

In a separate project, the Kalispel Tribe also is continuing to develop a hardware store in partnership with Builders Supply Inc. The 70,000-square-foot facility, which is scheduled to open later this year, will be located north of the Kalispel Market and Chevron Fuel Station, which is near the northwest corner of U.S. 2 and Hayford Road.