Dozen new units in Valley to wrap up by year-end 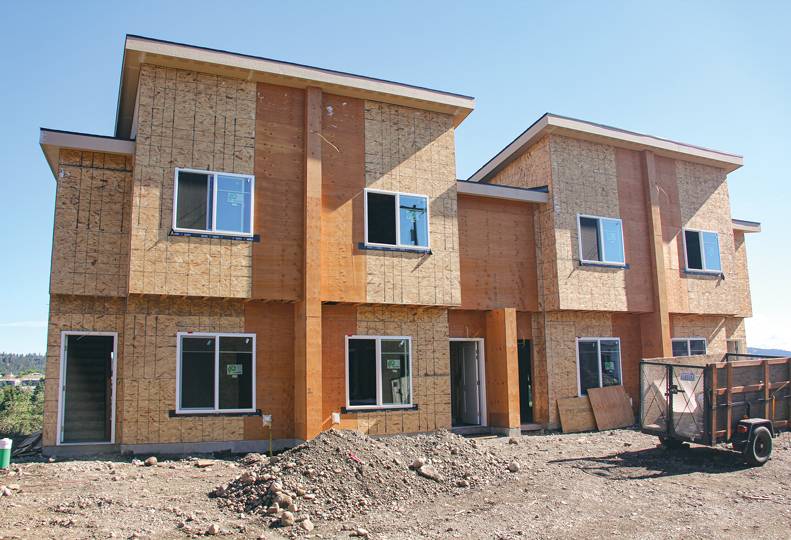 -Natasha Nellis
Townhomes rise off of Union Road in Spokane Valley. The project is one of many of its kind underway in the Spokane area this summer.

Three townhome-style projects with construction values totaling $5 million are planned or underway in the Spokane area.

Will Clark, owner of Union Townhomes at 1724 N. Union Road in Spokane Valley, says work on the first phase of a two-phase residential project will wrap up by the end of the year, with work on phase two to begin next spring.

The project is expected to be completed by summer 2023.

Clark is both the owner and contractor on the project, through his company Spokane Property Services LLC. Trek Architecture, of Spokane, designed it.

Each four-plex unit will have 1,000 square feet split between two floors. The units will be two-bedroom, 1 ½-bath units and will rent for about $1,400 a month, Clark says.

Meantime, the apartment units in next stage of development, which will likely be a mix of one- and two-bedroom units, will range between 800 and 1,000 square feet, says Clark.

Phase one is valued at $2 million. He declines to estimate the total cost of the development.

Prices for trusses increased 40% over the few months in between the building of the first fourplex to the final one, says Clark.

A representative of Eastmark couldn’t be reached for comment.

No contractor or architect is indicated on planning documents. The project was in pre-development process earlier this month.

The project is located south of the junction of 11th Avenue and Rockwood Boulevard, just southeast of the Canterbury Court Apartments.

At 6030 N. Ruby, on the North Side, Quigley 2 LLC is building a seven-unit, two-story townhome-style rental project dubbed the Ruby Townhouses. The project, valued around $500,000, is being built on the southeast corner of Ruby Street and Dalke Avenue.

In total the project is estimated to be just over 7,100 square feet.