Company is among first signs of activity inside long-dormant complex 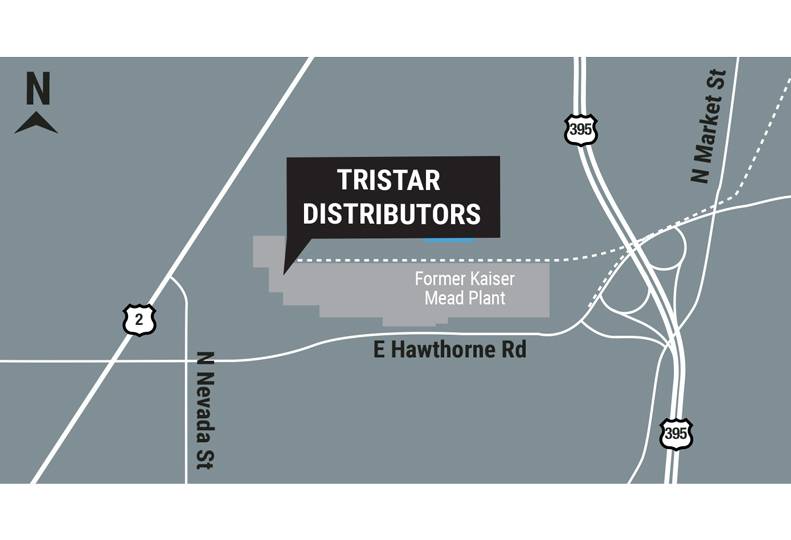 Peter Howe, owner of the transload company, says it’s leasing about 6 acres of the site from Spokane Recycling Co., which purchased the 1.8 million-square-foot complex in 2014, according to Spokane County Assessor’s Office records.

Tristar is looking to add timber companies to its roster, he adds. When it first moved to the area, Tristar signed on Katerra Inc. as its first timber client in the area, says Howe. However, the company filed for bankruptcy a few months later and closed its Spokane Valley facility in June.

As a transload company, Tristar handles the onloading and offloading between different transportation modes, such as from truck to rail, or truck to dry van, and vice versa. With its lease, the company has rights to about 8,500 feet of lineal track, to allow for use with BNSF Railway Co., says Howe.

Tristar has been operating with four employees at the site, he says. In total, the company has 42 employees between its Spokane and Vancouver, Washington, and California locations.

Tristar also has first rights for five years on two 36,000-square-foot warehouses on the site that are in the process of being cleaned up.

The Kaiser Aluminum Corp. Mead plant has been shuttered for 20 years following its closure in 2000. The site underwent a $10 million project last year to clean up asbestos and polychlorinated biphenyls, or PCBs. Contractors also dredged settling ponds and drained the underground aqueduct.

The cleanup process has spanned several decades by multiple property owners and environmental regulatory agencies since Kaiser sold the property in 2004.

James Getter, general manager of Spokane Recycling, declines to comment on the company’s future plans for the site or to provide a timeline, noting that cleanup is still underway.

“What that facility is, is potential,” says Howe.