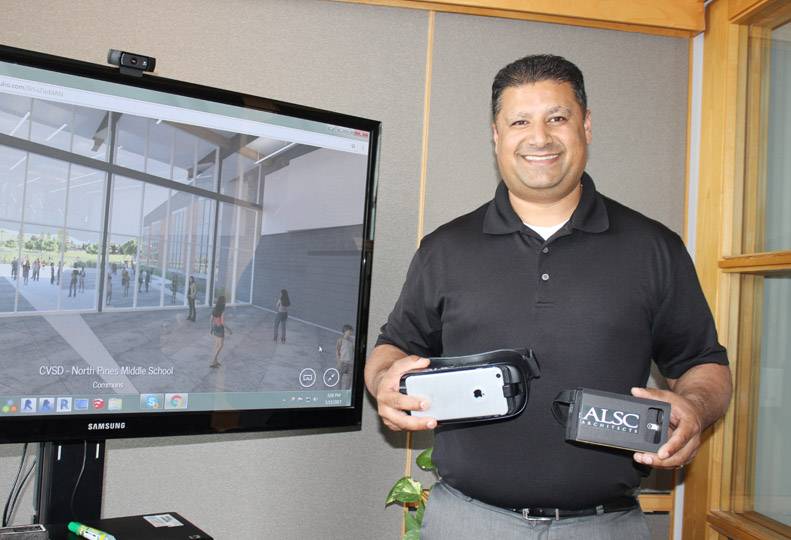 Wearing virtual reality goggles, someone using 3-D technology can step into the middle of a North Pines Middle School common space that doesn’t exist yet.

With the same goggle headset, the person with a head tilt or circular movement can get a panorama view of that school space designed by ALSC Architects PS, of Spokane. Just over a year ago, the firm began incorporating more virtual technology into its design work to give clients better visualization of future building projects.

Before construction occurs, designers realize people might have difficulties imagining what a proposed gymnasium or business space would look like based on a line-drawing floor plan, or even an artistic rendering, says Indy Dehal, an ALSC principal and architect.

By applying virtual reality technology and related free apps, the company hopes to offer another dimensional way to envision projects such as designs for North Pines Middle School’s replacement facility set to open by fall 2018. ALSC also recently used the technology to showcase images for two elementary school projects in the Central Valley School District for Opportunity and Sunrise.

Dehal says the firm has slightly higher-quality virtual reality goggles for use in its office in downtown Spokane, along with less expensive cardboard-framed ones that can be given to clients to keep in their workspaces. Both kinds work the same way. The client inserts a smartphone into the goggles, and views design images on the device’s screen looking through the virtual reality headset.

The image on the smartphone, called up from a link on ALSC’s website, appears to the naked eye as a split screen, but once the image is viewed through the goggles with use of virtual technology, it appears to have one 3-D point of view.

“We give clients cardboard-version goggles,” Dehal says. “Generally, they go to our website, click on a link with a smartphone, and stick the smartphone on the goggles. It allows you to see two screens simultaneously; that’s what makes the three-dimensional image.

“They can be in an office using the goggles, or we have images that can be viewed on a website.”

A few of the ALSC 3-D images require goggles for the virtual reality’s magic to occur, however. With commercial virtual reality googles becoming more affordable, and with free apps available as well, the technology enables creation of realistic scenes layering in dimension, scale, colors, and the feeling of standing in an actual space.

Dehal, who leads design work at ALSC, works with a team in the firm’s office here to put together virtual designs.

“It’s becoming integral to our workflow,” he says. “We work naturally anyway in three-dimensional model programs such as Revit and SketchUp, so it’s natural from those models to work them into a number of apps for a virtual tour. We use Yulio to create our virtual reality panorama image so you can immerse yourself in an environment.”

As an example, a Central Valley board member might view a school space design with virtual reality goggles to gain a better understanding about plans for a multipurpose room and color scheme. Another person working in the school might want to get better visuals of a future administrative office space to offer ideas, Dehal says.

Such a visual presentation adds another way to envision a space than perhaps a blueprint could.

“We often present our work with floor plans and just a still image, and they’re trying to put it together,” he adds about working with clients. “They don’t always understand what it will look like. The virtual reality simulates a real-world scenario, and they can move around in that environment. One of the benefits is it’s part of our workflow already, and there are free apps out there to show people what we’re already doing.”

“I think one of the other benefits is it allows customizable experiences,” Dehal says. “The user can take the model and use it how they would experience the space. We all experience a space differently. A teacher might experience a school space in a different way, or an administrator might view it with a unique perspective. Then they can bring up any questions or concerns from their unique perspectives.”

More advanced virtual reality applications are beginning to be used in larger cities, including some applications for clients to walk from one space into another space for a virtual tour of a broader spectrum of what will be built. ALSC hasn’t moved that far into the technology yet because of the time commitment required for more advanced options. However, the company likely will adopt similar applications when appropriate in the future, Dehal says.

“Right now, we’re using it to where you have more of a still image, and you pick a scene to go to, such as you want to go see the common space, and the next one will take you to the gym,” he says. “It does feel three dimensional because you can move your head up and down and to the side, and it feels like you’re in the space.”

He hasn’t yet heard of widespread virtual technology use by design companies in Spokane. For ALSC, he credits some of its young employees for being on top of next-generation technology that can benefit clients.

“Our approach is to tell our clients’ story, and the best way to tell their story might be through virtual reality, or it provides another way of telling how we’re trying to convey an idea,” he adds. “We’ve been using it more as more people get trained in how to implement it and we fold it into our workflow.”

“The virtual technology could eventually be used for tours,” he adds, such as for a student housing project. ALSC recently developed virtual reality designs for a Columbia Basin College residential facility, and students can view 3-D images of future living spaces by using a laptop. However, that particular design work isn’t yet presented in the form of a student walking tour using virtual reality goggles.

“Some virtual technology can do that,” Dehal says. “That’s where we want to go eventually, and I think that’s where the technology is going. There’s the time it takes to create it, so we’re not utilizing it right now, but we realize that’s the opportunity we’re working toward.”