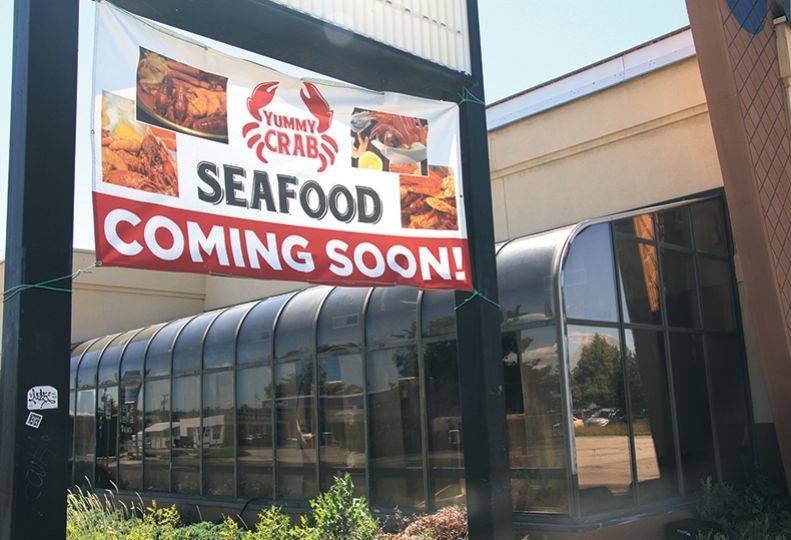 -—Erica Bullock
The Yummy Crab restaurant is planned in a former Burger King restaurant building along Division Street, on Spokane’s North Side.

Construction is planned or underway for six new restaurants in Spokane with expected openings starting this summer and continuing through mid-2023.

Norris says Kasa will occupy about 2,400 square feet on the ground level of the building and will use large windows as a focal point for patrons to view the Pavilion in Riverfront Park.

Lorèn will be slightly smaller, at about 2,200 square feet, and will be in the basement level. Norris says Lorèn is a French-inspired speakeasy that will serve food and crafted cocktails and will have a “secret room” for private events.

“My goal is to serve elevated foods that locals will be proud of and highlight the flavors of the Inland Northwest,” she says.

Norris says construction has been delayed due to supply-chain issues and dramatic price increases. The total estimated construction value for both venues is about $185,000, permits on file with the city of Spokane show.

Rockford-based GR8 N.W. Construction LLC is the general contractor, according to city of Spokane permit information. Spokane-based Indigo Diggs LLC is the architect for both projects also.

Kasa will open later this summer and Lorèn is anticipated to open in September, once permit applications are approved, Norris says.

Pisors says it’s been a long road, and the project is about halfway through a two-year planning and construction process and is expected to open in mid to late 2023.

The restaurant will have two drive-thru lanes to accommodate what’s expected to be a strong demand and allow for a higher capacity for production.

“(Spokane) is a growing market, and there hasn’t been much penetration of the New Orleans flavors,” he claims. “So we saw this as a good development area because there just wasn’t that flavor of fried chicken available right now.”

The North Spokane Popeyes will hire about 60 people, he adds.

Pisors says the company will select a contractor for the project once construction permits, which currently are under review, are approved by the city.

Taco Vado, a drive-thru taco stand at 1602 N. Ash, is relocating to a bigger building about a half mile northeast, at 1327 W. Northwest Blvd.

Taco Vado manager Mark Blanton Jr. says the new lease was offered by a customer and fan of the restaurant. The site provides a larger kitchen and can accommodate 30 to 45 patrons in about 1,500 square feet of space. The current building along Ash is almost four times smaller, at about 400 square feet, and doesn’t offer dine-in options.

“We’ve been getting busier in our third year, and with the stand we currently run, there’s just no way to output the food we need every day,” Blanton explains. “We had to decide if we wanted to get rid of the drive-thru, which was a really hard decision because the drive-thru served us well during the pandemic, but we wanted to change because we offer something special on the customer service side of service and we could enhance the atmosphere.”

The restaurant is expected to open in the new building by Oct. 1, and renovations will cost about $50,000, Blanton says.

F3 LLC, of Spokane, is the general contractor, city of Spokane permits show.

Yummy Crab of Spokane Inc. will be located in the former Burger King restaurant site at 1723 N. Division and will open by the end of the year, says restaurant owner Liming Zhang.

The interior of the 4,000-square-foot building is being renovated to update the dining area and enlarge the restrooms.

About 10 people will work on-site, he adds.

He says the inside dining area will hold less than 100 people, and he plans to keep the drive-thru open.

A California-based burger franchise, the Habit Burger Grill, is being constructed at 6335 N. Division, according to permits on file with the city of Spokane.

A representative from the franchise couldn’t be reached immediately for comment.

The Habit Burger Grill will serve typical fast-food menu items, and its signature chargrilled burgers will be cooked over an open flame, according to the company’s website.

Permit data shows the building will be more than 3,000 square feet in size and include a dining area with a capacity of 83 occupants and a drive-thru lane.

A contractor isn’t listed on permit information, which shows the construction value of the project at $700,000.

Debbie Kruse, kitchen manager, says the Post Falls restaurant, which will be similar in size to a typical food truck, is expected to open by mid-July. Outdoor picnic table seating will be available seasonally.

The menu will focus on handhelds such as pulled pork sandwiches but won’t offer the prime rib or steak featured at The Smokehouse’s original location, 1901 E. Sherman, which opened in Coeur d’Alene in 2017.

Kruse says owners Todd and Michele Clark hope to keep the same hours at the Post Falls location as the Coeur d’Alene restaurant, but staffing shortages could result in shorter hours of operation in Post Falls.

•A building permit application has been filed for a remodel of the Bed Bath & Beyond retail store at 5628 N. Division. The work, valued at $255,000, will include updating the sales floor, adding self-checkouts, and painting the exterior of the 36,800-square-foot building. The architect and engineer on the project are listed as Cleveland, Ohio-based Onyx Creative. A contractor hasn’t been selected yet, according to the permit application.