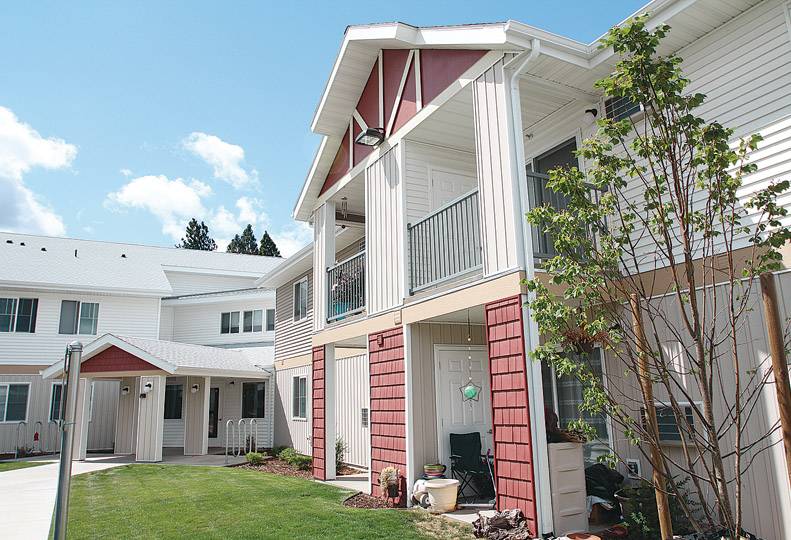 Recent high-profile, low-income senior housing projects here valued at some $34 million mark a brief surge in such developments before an impending drought, people involved in the projects say.

The project pipeline for low-income senior housing projects has dried up in response to reductions in federal and state funding, they say, even as demand for housing is expected to grow.

Dave Roberts, senior developer at Spokane Housing Ventures, says a major federal funding source for low-income senior housing projects has been converted to rental assistance rather than capital, and no capital money has been allocated through the state for such projects here in recent funding cycles.

The Clare View project included construction of the 61-unit Clare View apartment complex at 3146 E. 44th and renovations at the 124-unit Clare House nearby, at 4827 E. Palouse Highway.

“The demand is there,” he says of low-income senior apartments. “We have no difficulty filling them.”

Roberts says Spokane Housing Ventures doesn’t have any other senior-housing projects in the works due to funding challenges.

Community Frameworks, another affordable-housing organization, also has no senior projects in the wings to follow up its recent projects, says Chris Venne, finance development manager at the Spokane-based nonprofit.

“The HUD 202 program is no longer funding any new construction,” he says referring to a U.S. Housing and Urban Development elderly housing program authorized through Section 202 of the Affordable Housing Act. “That’s a big loss.”

Community Frameworks put together financing packages for the $10 million renovation project under way at Lilac Plaza, on Spokane’s North Side, and the $4 million Appleway Court II construction project in Spokane Valley, both of which are low-income senior housing developments.

The Lilac Plaza project, which is owned by Spokane Baptist Association Homes, includes remodeling all 174 living units and common areas in the 13-story tower, at 7007 N. Wiscomb.

The project, which also includes updating the building’s mechanical systems, is expected to be completed early next year. The improvements, however, don’t add any living units, and the facility is expected to be fully occupied shortly after the project is completed.

HUD 202 funds were vital components in the funding for the Claire View and Lilac Plaza projects.

Until recent funding cycles, the HUD 202 program had provided interest-free capital advances toward construction, rehabilitation, and acquisition of housing for very low-income elderly residents. The developer or project owner doesn’t have to repay HUD 202 funding as long as the project serves very-low income elderly for at least 40 years.

For the last couple of years, however, HUD has focused its elderly housing funds on providing rental assistance for very low-income elderly, rather than expanding the housing supply, Venne says.

Just as federal funding has shifted funding from capital projects, the Washington Legislature has cut back allocations to the state’s Housing Trust Fund, which is administered by the state Department of Commerce.

“The need is growing, but the funding recourses are shrinking,” Venne says. “Clearly, the demographics are fueling demand. Some percentage of aging baby boomers is going to be very low income and not served by the market. We need to figure out how to provide more housing units.”

While the nonprofits have celebrated some success in developing or assisting with senior-housing projects, their work isn’t done, Venne says.

“One of the realities of housing development is that it takes several years for a project to reach fruition,” he says. “Projects just being completed now were funded several years ago. It looks now like things are humming along, but I think down the road, the number of units are going to decline.”

It’s not just the nonprofits being parched by the funding drought.

“We get involved when they need a building,” he says.

Spokane contractor Kop Construction Co., which specializes in constructing low-income senior housing for nonprofits, has no big jobs on the horizon beyond the Lilac Plaza project, says Matt Wheelwright, project manager for Kop.

Kop Construction also was the contractor on the Appleway Court II project.

Wheelwright also cited lack of HUD funding for the dearth of such projects.

He says developers likely are going to have to round up larger shares of private funding to get projects off the ground.

“In terms of public funding, you can get a little bit, but not enough to build a substantial project,” Wheelwright says.

Venne says Community Frameworks is looking for opportunities to develop or assist in new senior-housing projects. “We’re looking all over the area for the right sites and the right projects,” he says.

Meantime Community Frameworks’ main project that’s in the early planning stage is the proposed redevelopment of its headquarters site at 315 W. Mission. The envisioned $7.6 million project would include constructing a new four-story building with 29 workforce-housing apartment units and ground-floor office space at the southeast corner of Mission Avenue and Washington Street, north of downtown.

The nonprofit has received some support through the city of Spokane’s affordable housing program and hopes to seek a major portion of funding in the form of tax credits through the Washington State Housing Finance Commission.

Tax credits are used to entice investors, who look to buy them at some discount, resulting in savings on their income-tax bills.

With funding for new projects is at a bottleneck, Spokane Housing Ventures has focused this year on shoring up its inventory, Roberts says.

“We didn’t see the ability to put together a new project,” Roberts says, “We turned to our portfolio to take care of issues with deferred maintenance.”

“We plan to do new development in the future, but we don’t have anything on the burner right now,” Roberts says.

David Clifton, assistant director of the Housing Finance Commission, says he expects to see a lot of competition for tax credits in coming months.

With the scarcity of HUD funding and shortage of state capital funding, there aren’t many other resources available for low-income housing for seniors or any other segment of the low-income population, Clifton says.

The commission has approved financing for three senior projects this year—none of them in Eastern Washington.

“We don’t have any low-income senior projects scheduled to be produced in Spokane,” he says.

The next round of funding requests will be reviewed at the beginning of the year, Clifton says, adding that he’s not hearing of much movement by the state to restore the Housing Trust Fund or by the federal government to revive the HUD 202 program.

Any new funding request in regard to senior-housing projects will compete for funding with projects targeted to benefit homeless, disabled, and general low-income populations, Clifton says. Proposed senior projects can move up on the priority list for funding, however, by including services to assist with activities of daily living, he says.

The commission is a self-supporting agency that works with lenders, investors, developers, and nonprofits to attract private investment dollars to fund affordable housing.

“We’re outside of state funding,” Clifton says. “We do use federal programs such as low-income housing tax credits and bond funding.”

Even with those tools available, it’s still up to banks, financers, or investors to fund the projects, he says.