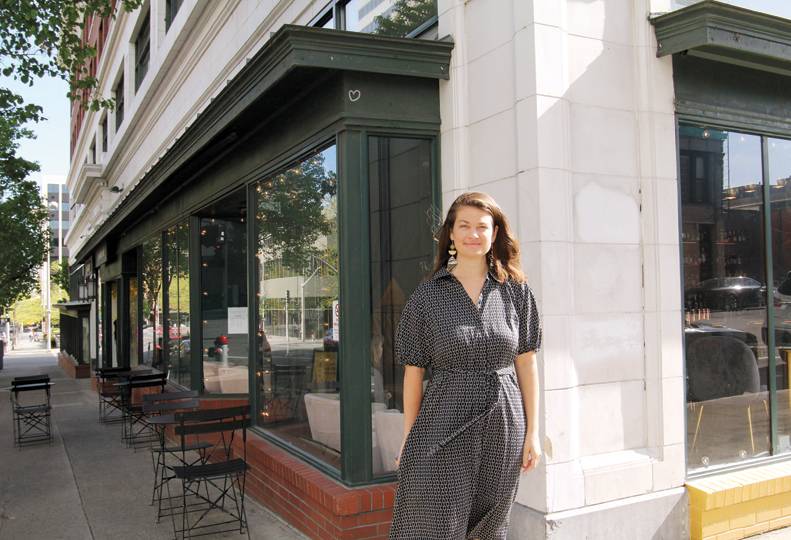 -—Karina Elias
Alyssa Agee, who owns the Symons Block building in downtown Spokane, says she plans to have short-term rental units in the structure to keep apartment rents at $2 a square foot. 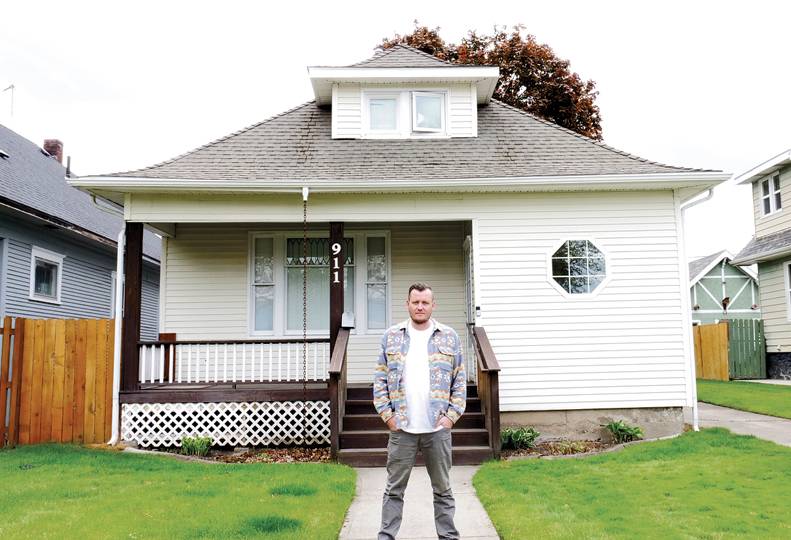 -—Karina Elias
Trevor Cressy stands outside one of the 10 Spokane-area homes he operates as short-term rentals. He says the region needs such family-friendly accommodations for visitors.

Some multifamily residential developers here say that they need income generated from short-term rentals, such as Airbnb and Vrbo, for projects to pencil out.

Jordan Tampien, co-owner and founder of 4 Degrees Real Estate, says a recent trend within multifamily residential construction and development is to include projected income from short-term rentals in loan applications.

“The new trend, as of the last couple of years, has been financing loans by including Airbnb income,” says Tampien.

Short-term rentals are fully furnished dwellings that operate similar to hotels and have a higher rate of return than conventional apartment units. Tampien says the typical rent for a one-bedroom apartment in Spokane is $1,200 a month, while a short-term rental can bring in as much as $3,000 monthly.

He contends that escalating construction costs exceed what developers can charge for rent in the current market.

Another trend that Tampien and others have noticed is that short-term rentals are being used by people who are moving to the Spokane area and are staying two to three months to avoid signing a typical one-year lease on a conventional rental while they wait for a more permanent home or apartment to come available.

Tampien says that of the 50 to 60 short-term rentals he operates in downtown, 85% are leased for 30 days or more.

Alyssa Agee, owner of the historic Symons Block building, says she’s applying for financing from a local lender and plans to include projected income from short-term rentals in the loan application.

She plans to have 10 Airbnb-style units and 12 to 15 conventional apartment units in the Symons Block building, located at 9 S. Howard, in downtown Spokane.

The current rental market calls for charging about $2 per square foot, Agee says. With most downtown apartments no larger than 700 square feet, the minimum she could charge is $1,400 per unit. She says those prices could easily jump to $2.50 to $2.75 per square foot.

“To rent those apartments at what is considered market rate, displaces a large portion of our community from ever being able to rent from us,” she says.

Not all developers are able to use the short-term rental platform to their advantage. Dave Black, CEO of Spokane-based commercial real estate brokerage NAI Black, says that when remodeling the Marjorie Apartments, at 107 S. Howard, he had leased an entire floor to short-term rentals. However, he says he is no longer doing that, as some federally backed and traditional housing lenders don’t accept projected income from short-term rentals as part of their lending process.

“My lenders don’t like it (because) it gets them in the hotel sector,” Black says.

Also, some housing advocates believe short-term rentals could have a negative impact on the housing crisis that Spokane faces.

Ben Stuckart, executive director of Spokane Low Income Housing Consortium, says there is a shortage of housing and rental supply, increased homelessness, and rising rents. In that environment, he says, even a small number of units will make a difference.

“We’ve seen a skyrocketing of rent over 50% in the last 24 months, and that’s not some normal market blip,” says Stuckart.

Spokane has an apartment vacancy rate of 1.1%, according to the Washington Center for Real Estate Research’s Apartment Market Report for fall 2021.

AirDNA, a platform that tracks short-term rental data across many cities, shows there are 828 short-term rentals in Spokane, while city records show about 160 of those rentals are registered with the city.

Spencer Gardner, planning director for the city of Spokane, says that the city council is currently in conversations about the role of short-term rentals in the housing market—and the city’s role in regulating it. The plan commission has paused its own work on the subject to join the larger conversation, which involves staff from permitting and code enforcement coming together.

One concern driving the short-term rental conversation in the city is the potential negative impact rowdy guests can have on neighboring residents. Another concern is that the city doesn’t want to create incentives that will allow housing units to be used for short-term rentals when there is a need for long-term housing for people who live and work here full time.

However, on the other side of these concerns, Gardner says he has heard from developers that the income from short-term rentals can be the difference between a project being built or not being built.

“So, by (the city) making it harder to build and operate short-term rentals, we could actually end up harming our housing situation by not building as many units as we otherwise might,” he says.

The city is challenged to balance the demand for more housing and the need for projects to be built to create that housing, Gardner says.

“The unifying theme across the board is, we don’t know. It would be nice to have data to know exactly how many units we have,” he says.

He adds that the data from AirDNA isn’t definitive because those listings aren’t limited to city limits. The city would need to purchase more specific data from AirDNA or any other third-party platform that keeps such data, in order to get a better grasp on how many short-term rentals are operating within Spokane city limits, he says.

“That kind of info. is important in guiding this conversation,” says Gardner. “The way those numbers shake out might lead us to different conclusions to what the nature of the problem is and what the right solution might be.”

Gardner says the city would be required to issue a request for proposals to partner with a company such as AirDNA. There have been previous attempts to issue such a request, he says, adding however, he doesn’t know why it hasn’t happened.

“That’s before my time,” he says. “I’m not sure what has stalled those efforts in the past.”

Other short-term rental operators, who rely on the supplemental income they generate, tout their benefits to operators and guests.

Trevor Cressy is a local Airbnb host who operates 10 short-term rentals in Spokane. He contends that short-term rentals offer a different experience for people visiting Spokane that is more intimate and comfortable than staying in a hotel.

Many of his rentals are homes with full kitchens and separate bedrooms, Cressy says.

One idea that has been floated by the city as they discuss how to regulate short-term rentals is the possibility of limiting short term rentals to only two per operator. Cressy is against this proposition on the grounds that the city needs to offer diversity in lodging and that limiting short-term operators is unreasonable.

“The city needs to have places that are family friendly. … They’ve spent millions to make Spokane a great place to visit,” he says. “It’s not wise to restrict short-term rentals. Two is unrealistic.”

Kathryn Kennedy says that she began to rent her spare bedroom and bathroom in 2018. At first, she was just looking to cover her cell phone and internet bills.

Kennedy says that in her early 40s she found herself rebuilding her life financially and wondering about her future retirement plans after the end of a relationship.

“I felt fortunate to fall into the opportunity of Airbnb when I did,” says Kennedy. “Because with luck, and if things hold, it will allow me to actually retire someday.”