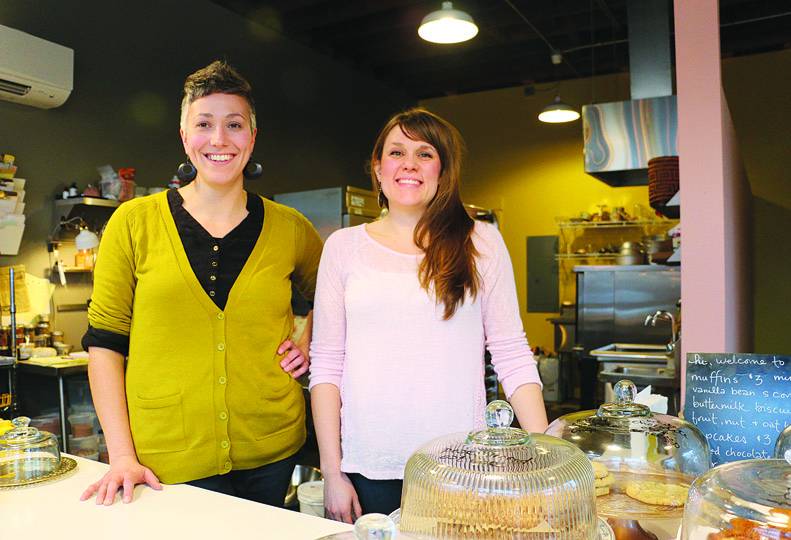 Batch, which is located at 2023 W. Dean in the West Central neighborhood, occupies about 850 square feet of leased bakery space, as well as a basement storage space, Maloney says. The building also has a studio apartment, currently vacant, behind the bakery, which isn’t part of Batch, she says.

Hamilton says Flora yogurt has been available at Batch since Jan. 14, and as of Jan. 20, it had sold 25 quarts.

Both Maloney and Hamilton also used the crowdfunding website Kickstarter successfully to help fund their businesses; Maloney raised about $15,000 in late 2013 to help open the bake shop’s storefront.

“I wanted to do (Kickstarter) because it was just the best option from a business standpoint,” Maloney says. “Also, when your Kickstarter works, it’s a nice reinforcement. It’s like there are people saying, ‘Yes, we want you to do this.’”

Hamilton got the idea from Maloney to try Kickstarter to raise the funds to buy a pasteurizer, she says. She successfully raised just over $13,000 last spring.

Maloney also says Kickstarter is a good way for very small businesses to raise funds without needing to negotiate a loan.

“I’d had my business for three years,” she says. “It was small, but I knew it could work. But, I didn’t have much to show a bank. Neither of us needed a huge loan, but neither of us had big businesses.”

Maloney has one part-time employee, and her mother, Jayne, also works in the bakery and makes handmade aprons to sell there.

Maloney has been operating Batch, which currently is open Tuesday through Friday from 7 a.m. to 4 p.m., as a wholesale business for nearly four years, she says, and just opened the storefront last fall. Maloney moved to Spokane from the West Side in 2007, she says, where she spent several years working at different small bakeshops and coffee shops.

“I worked at a lot of small, women-owned businesses,” she says. “I think if I’d worked at a big restaurant right away, I would’ve quit.”

Maloney rented space in a commercial kitchen here for the first several years, before opening the storefront last September.

She still sells several products wholesale to Spokane-area coffee shops, she says, in addition to the products she sells in the bakery, which include muffins, vanilla bean scones, cookies, cupcakes, and bars, she says.

“Then we have a big range of stuff we do for weddings,” she says.

Maloney says she makes cakes for about half the weddings she bakes for, and the other half of wedding clients want cupcakes or other desserts.

“The wedding side is definitely growing,” she says. “It’s one of the reasons I decided to get a storefront.”

The bakery’s offerings change by the season, Maloney says, incorporating seasonal fruits, which she purchases mostly locally in the warmer months. A few items stay year-round, she says, such as the vanilla bean scones.

“I’ve sold wholesale (baked goods) to them since I opened,” Maloney says.

Maloney chose to pursue baking because, “I think it’s one of the really simple things that you can then play around with,” she says. “It’s stuff people have been eating forever—a cookie, a muffin—but to do it in a way where they’re like, ‘Oh, I’ve never had this,’ is great.”

She also likes the upbeat exchanges she has with her customers.

“It is, for the most part, a really positive interaction,” Maloney says. However, it’s also a challenge to bake things people like, she says.

“It’s a fine line when you mess with people’s comfort food,” she adds.

The key, she says, is finding the right balance between sweet and savory.

“We use things like real butter, and nothing’s too sweet,” she says. “That’s something I hear from a lot of people that they like.”

Batch also has a patio space, which Maloney hopes to open this spring for outdoor seating.

“It also will be a rentable party space,” she says.

Maloney also has been a vendor at the Thursday Market, a farmers’ market located in the South Perry District that runs outdoors from May to October and indoors for part of the winter.

“I’ve done the market for the three years now,” she says. “It’s a great way to communicate with vendors and try out having a storefront.”

The Thursday Market also is how Maloney and Hamilton met a few years ago. In addition to operating Flora, Hamilton is the manager of the market. She first started making yogurt at home, but now makes it exclusively at Batch, she says.

“I was going through a big transition in my life, and I was looking for a way to support my family and be home at the same time,” Hamilton says. “And the biggest barrier was a commercial kitchen. And then Mika was like, ‘Use my kitchen.’”

Hamilton started making yogurt about four years ago, she says.

“I was a stay-at-home mom, and I joined a milk co-op with some friends,” she says. “But, we didn’t really drink milk a lot. So I was coming up with creative ways to use the milk, and yogurt was it.”

Hamilton had some friends who were fans of probiotics, she says, and they asked her to make yogurt for them with the excess milk.

All of Hamilton’s current yogurt varieties are what’s known as “heirloom” yogurt—it all comes from existing cultures, she says.

“Heirloom means it’s something that exists on its own; (the cultures) have been preserved in kitchens for decades or even centuries,” she says.

Hamilton contends that 90 percent to 95 percent of the yogurt found in grocery stores are made with lab cultures, meaning the culture is cobbled together from several different bacterial strains and probiotics. When used as a starter to make more yogurts, this kind of strain is less reliable and degrades over time, Hamilton asserts.

Hamilton decided to specialize in heirloom cultures, she says, because the culture can be used to start new batches of yogurt indefinitely if cared for properly. For example, Hamilton has one culture that is 100 years old, she says.

“I just think there’s purpose in the way things happen on their own,” she says. “I think it’s got more health benefits.”

Hamilton gets all the milk for her yogurt from Spokane Family Farm, of Spokane, she says.

“That’s been a really neat relationship to watch blossom,” she says. “They are super supportive.”

Hamilton makes several varieties of yogurt, all of which are plain; she doesn’t add any flavors, she says.

One is villi, a Finnish yogurt that Hamilton describes as “really mild,” along with another Nordic variety called Filmjolk. She also makes buttermilk yogurt.

Hamilton also makes a Mediterranean yogurt, which is tangy and creamy, she says.

Finally, Hamilton makes a strained Bulgarian variety, which has the excess whey removed, resulting in a thicker texture. She also has a Bulgarian variety that she blends into a drinkable yogurt.

“Each one of those varieties has unique textures and flavor profiles,” she says.

The yogurts can be used in a variety of recipes or as nutritious snacks on their own, Hamilton says.

“The thing about the drinkable, since it’s so smooth, it’s a nice way to get more of a complete food,” she says. “My kids drink it a lot. We also pour it over apple crisp and use it as a thickener for soups.”

Hamilton decided not to flavor the yogurt so that customers could use it for whatever they want, she says.

“The thing about leaving yogurt plain is that you could use it for sweet or savory,” she says.

For now, Flora yogurt will only be sold at Batch, Hamilton says.

“There will be some other places, but we’re just trying to get our bearings,” she says.

Both Maloney and Hamilton say that they’ve had significant experiences as women who own small businesses; Hamilton says she wants her daughters to see her business as something they could do as well.

“I have two daughters,” Hamilton says. “I want them to know they can do anything.”

“Working with other small, women-owned businesses made it a really positive experience for me. It was a safe space,” she says. “For me, I’ve gotten a lot of support from other really small businesses, so it feels good to pay that forward.”