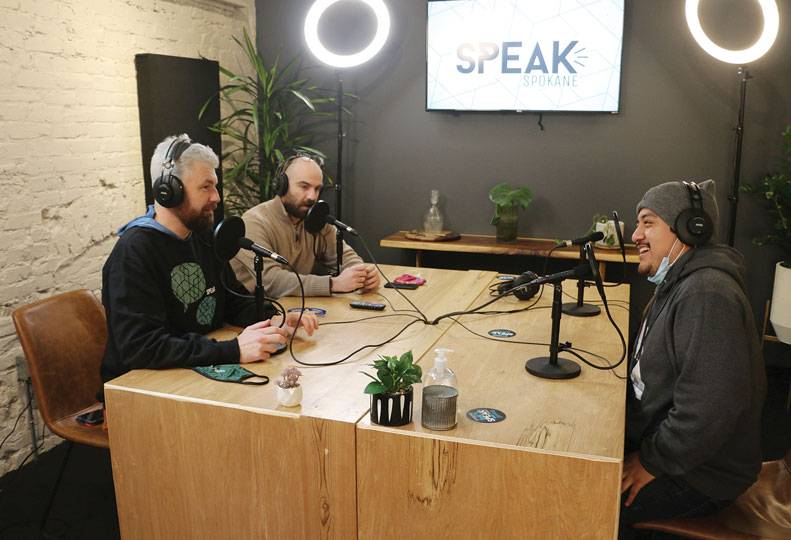 “The goal for Speak is that we want to have a Speak Studio in … every major city in the country,” says Steve Dobbs, the company’s creative director.

The podcasting recording studio, which offers professional recording studios and technicians to clients who the team has dubbed “creators,” was founded in Spokane in August at 530 W. Main, in the Bennett Block building in downtown Spokane. The company also has established a location in Coeur d’Alene, below the Woops Bakeshop at 330 E. Lakeside, that has four studio spaces.

This week, the company plans to open a third studio in Boise. That operation, which will have six distinct studio spaces, will be the company’s largest to date, Dobbs says.

Speak Studios currently has 10 employees, most of whom are based out of the company’s Spokane headquarters. The company plans to open another studio location at 169 S. Stevens downtown, but will retain its headquarters location, says Dobbs.

Looking ahead, Brennon Poynor, Speak Studios agent in Spokane, says the company is eyeing its next locations, which could include studios in Missoula, Montana, or Bellingham, Washington.

In total, the company currently is producing about 60 podcasts, which range in topics from health care to life coaching to real estate, Dobbs says.

“We have a pretty diverse group of podcasts, and it’s only growing,” he adds.

The primary membership through the studio is free, but the company does have paid memberships that offer creators after-hours studio access and raw audio files. Each studio session typically lasts 1.5 hours, and members are free to create as much content as they wish, says Dobbs.

“Right now, we want people to create as much as possible,” he says.

The bulk of the company’s revenue comes from sponsors and advertisers. Theresa Berglund, director of sales and marketing, says the company plans to offer creators a percentage of the advertising revenue generated by the creators’ podcast. Qualifying for the percentage will be based on how many listeners the podcast has and advertiser interest in being marketed on that podcast.