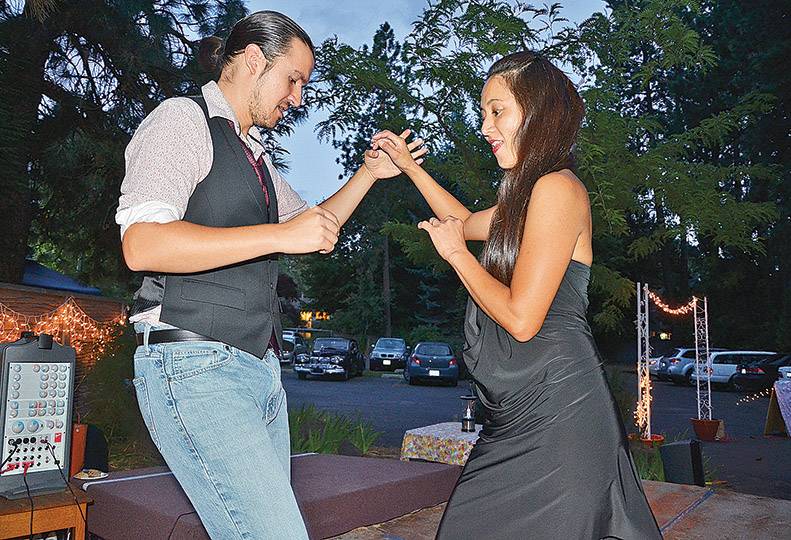 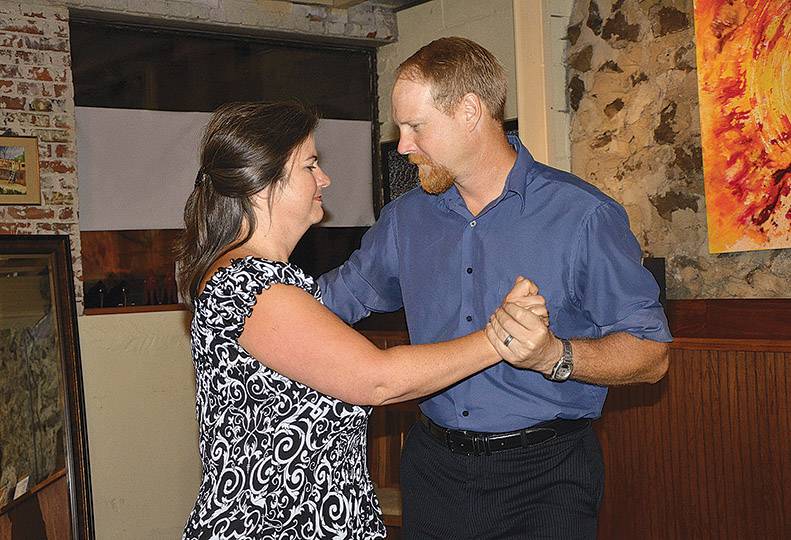 -—Judith Spitzer
Penny Petrina and her husband, George, are practicing the tango at Satori Dance Studios, in downtown Spokane. Penny says dancing is cheaper than counseling.

Satori is a Zen Buddhism term meaning sudden enlightenment, or one of those “aha moments,” although there is no literal English translation for the word, says Victor Smith.

Smith owns Satori Dance Studios at 122 S. Monroe, and those aha moments are what he hopes people will experience when they dance the salsa and Argentine tango—two of the most popular Latin dance styles. It is an experience one can have only in the physical encounter while dancing the dance, he contends.

“Satori refers to a moment of understanding, of learning or realizing. When one achieves fluency in a language, it feels much like when one becomes fluid at tango,” Smith says.

He offers private and group classes in Argentine tango, while his business partner, David Diaz, who moved to Spokane from Tokyo last year, teaches various forms of salsa at the studio Smith opened about a year ago.

Open six days a week, mostly in the afternoon and evenings, the roughly 800-square-foot studio is home to lessons and a gathering place for people who are passionate about other cultures. Satori students are couples as well as singles who come—sometimes several times a week Smith says—to cultivate an interest in the music and the language behind the Latin dance styles.

“Exposure to the music often leads to an interest in the language and other cultural elements that can be hard to find elsewhere in Spokane,” Smith says.

Smith says his goal is to make a safe space to try out studying Spanish or salsa or French or tango, where the goal is communication rather than a rehearsed recital or performance.

“The back-and-forth of a conversation is different than parroting a memorized routine. We hold dances where students of diverse languages converse and share,” he says. He adds that it’s good exercise and “it’s usually cheaper than what people spend to go out to dinner.”

Smith instills, demonstrates, coaches, and shows about 20 to 30 people at a time the Argentine tango, a dance he’s taught for more than 20 years in what he calls tango practicas. “We top out at 49,” he says adding the studio has only seen that number once or twice.

Private lessons, which run about $40 per hour, are also available for both tango and salsa dancing.

Smith has lived and taught dance and language all over the world, including in Avignon, France; Milan, Italy; and Mexico City. He is a student of a dizzying array of languages including Portuguese, Russian, Mandarin, and Italian. He has also studied tango from dozens of Argentine instructors, flamenco in Spain and New Mexico, and salsa with Cubans, he says.

Eight years ago, he returned to Spokane to care for his elderly mother, which he continues to do today as a full-time job.

Smith says there are no basic steps to Argentine tango. Unlike ballroom dancing, tango is a conversation, he says, although certain patterns of movement have been codified by instructors over the years as a device to instruct dancers.

“Tango is much more like a conversation,” Smith says. “I teach it as a language, rather than we’re going to do the hokey pokey.”

He teaches based on the idea of having a good dialogue with a partner.

“Ballroom you can do by yourself,” he says. “It really has nothing to do with a partner. It’s the same choreographed steps.”

“Tango is just the opposite. Rather than memorizing a routine, which is the essence of ballroom dance, tango is a conversation … how was your day? How are you feeling? The guy is supposed to listen to the girl … dance is about listening to the woman. You’re supposed to let her feel beautiful and get lost in the music. When I dance, it’s not to impress the audience; it’s to impress the girl.”

Smith says the dance business is typically seasonal but he is surprised by the studio’s growth in students over the summer.

“Finances in dance studios have always been associated with a seasonal business cycle, but I’m pleased at how things are growing. Many dance businesses close for the summer and start out big in the fall. But I’ve been really pleased with how busy it’s been,” he says.

Betty Wetzel, 85, danced with Smith onstage in front of several hundred people some months ago at a church function. After Wetzel’s husband died two years ago, she decided to take up the tango. “Something inside me just said go for it,” Wetzel says.

Although she has been a singer and dancer most of her life, as well as mother to seven children, she says the tango is different than anything she’s ever done.

“You have to be aware of your partner’s movements. It’s a dialogue. I’m supposed to feel what he wants. There’s no memorization of the basics,” Wetzel says.

Smith says he’s seen much improvement in her balance and flexibility. Betty has noticed the difference as well. “My balance is so much better,” she says. “I’m still learning the terminology and the language.”

Smith says he was delighted to take on his business partner, David Diaz, when the two met last October. “David was a top level salsa instructor in Japan. He’s competed on a national and international level and performed on TV,” he says.

Diaz says they hit it off immediately.

Originally from Seattle, Diaz has taught, choreographed and competed in Tokyo for the past seven years. He says most of his work has revolved around teaching students salsa dancing for the dance club, but he also choreographed Japanese representatives to the World Latin Dance Cup, appeared on local and national television in Japan, and represented Latin American embassies during consular culture-themed events. He currently teaches a full schedule of group classes at Satori on salsa and its many variations, and hosts a Latin dance-themed, multimedia website at www.salsa-dance-spokane.com that’s aimed at promoting salsa in the Inland Northwest.

Diaz says he loves the idea that students of Satori are encouraged to explore the Latin culture and roots of tango and salsa music via the free language lessons.

While Diaz says he is learning about the world of tango, he trained specifically as a salsa dancer. At 22, he took off for Tokyo and was teaching English there before he says he “realized my true calling was as a salsa dancer.” Although he majored in philosophy in college, he says he fell in love with moving and dance.

Much later, he met his wife Mina in Japan, and together they have twin boys.

After the earthquake in Japan in 2011, the couple decided to start planning to take their boys and move back to the U.S. He says the process took a long time but when they got to Seattle they decided they wanted to raise their family in Spokane.

“We got here last April and for many reasons decided Spokane was an amazing place to raise kids. Kids get to be kids here,” he says.

Diaz says he usually has 12 to 14 students at his salsa classes, depending on the day, and sometimes as many as seven couples. Diaz hosts salsa nights on both Friday and Saturday nights from 10 p.m. to closing. Fees are $7.50 for drop-ins per person, and packages are available as well.

Diaz offers a free, 30-minute lesson to try out a salsa lesson.

“I want people to get a taste of it,” he says. “We start with absolute basics.”

Diaz says he likes having people at every level in his classes, even those who have never danced. He says beginning students will feel safe in the learning environment. “It is low stress, and students’ learning is based on group comprehension and sharing,” he says.

Deana Davidson, a dance student for the past seven years, attends classes at Satori two or three times a week. She says she loves tango and salsa and the music gives her a way to express herself, get some exercise, and get out of the house.

“It helps my self-esteem, and my confidence,” Davidson says. “And there are wonderful people out there who dance and are not just out there to party.”

She says she met her husband while dancing, and the two dance for enjoyment. She says what they like about tango is that there is no memorization or learning the steps per se. “There’s really no preparation. It is improvisation and a conversation. It turns out to be a way we are communicating with each other.”

Lessons at Satori are offered drop-in style, meaning you can attend whenever you like, at your own convenience based on an online schedule of classes.

On weekends Diaz and Smith host a Salsa Night and the tango practice. “Learn a few moves during the week, and come out on Friday or Saturday … to let it all sink in,” says Smith.

Diaz and his wife Mina will be hosting a salsa demo at the “Una Noche de Copacabana,” a charity fundraiser on Sept. 27, at the Club de Latinas de Spokane at the Knights of Columbus, located at 302 E. Boone.