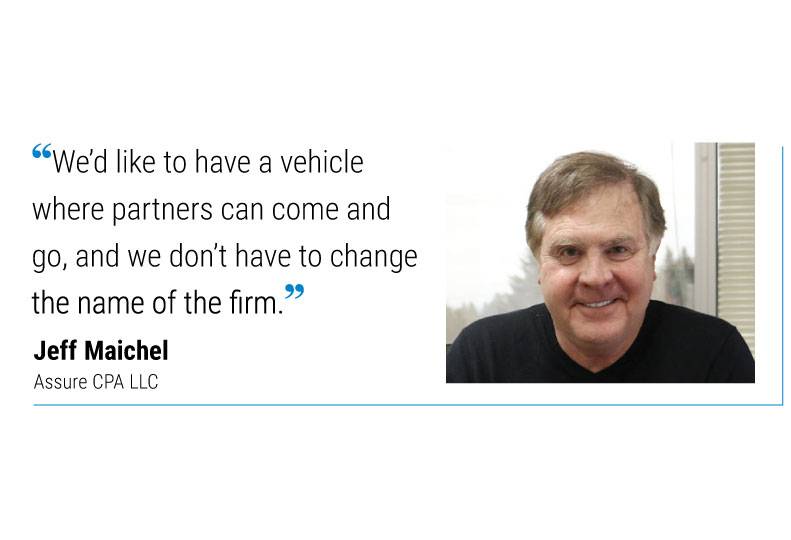 Spokane accounting firm DeCoria, Maichel & Teague PS is splitting into two entities but will remain under the same roof.

Jeff Maichel, who founded the firm in 1997, says it will be divided into Assure CPA LLC, which he’ll lead, and DeCoria, Blair & Teague PS.

“All Assure is doing is paring away that part of the most highly-regulated business that DM&T did so that we can bear the responsibility and maintain the controls that are necessary to audit public companies, where Dave and Mike and Brandon aren’t subject to as much oversight and administrative inspection and review,” Maichel says.

Maichel says that most of Assure’s “dozens” of clients are in the mining industry.

“Up here in the glorious Northwest, we have plenty of mining companies, big and small, to work on,” he says.

Maichel says he has a few reasons for adopting the name Assure for his company. One reason is that auditing has come to be known as assurance services.

“About 10 years ago, the term assurance services became more palatable than audit, because when people think of an audit, they think of the IRS coming in and looking over their shoulder,” Maichel says.

The name change also will help in succession planning.

“I’m 65 years old, I’m probably not going to be working too much longer into the future,” Maichel says. “We’d like to have a vehicle in which partners can come and go, and we don’t have to change the name of the firm.”

“Our domain is assure.cpa,” Maichel says. “It’s a new domain that was sponsored by the American Institute of Certified Public Accountants, our governing body, within the last year or two.”

Both Assure and DeCoria, Blair & Teague will continue to operate in the former DeCoria, Maichel & Teague office space, which takes up about 5,000 square feet in the North Spokane Financial Center, at 7307 N. Division.

Assure has nine employees. Maichel says he intends to hire at least two more people by the end of this year.