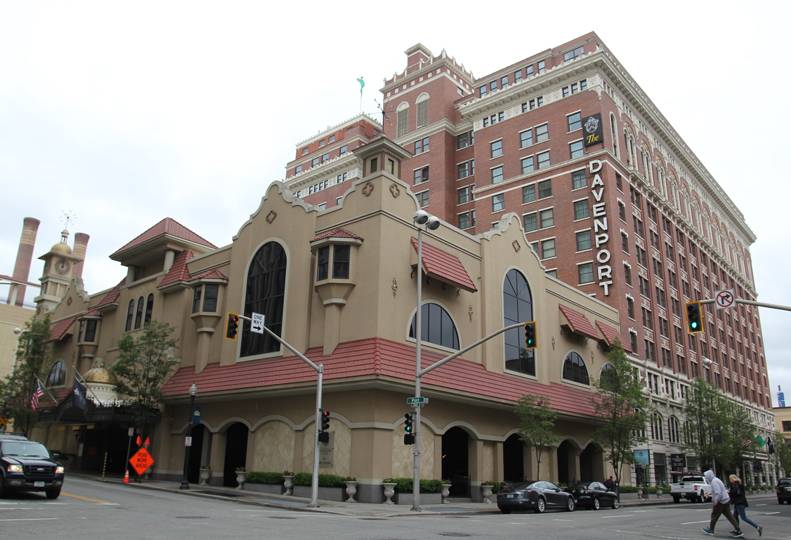 Worthy Hotels reopened the Historic Davenport Hotel, in downtown Spokane, earlier this month. The company had closed four of its five Spokane properties during the statewide Stay Home order.

Reports of hundreds of layoffs at hotels in the Seattle area this month have some in the industry here concerned that Spokane will once again follow the trends set by the West Side.

Others, however, contend Spokane has geographic and size advantages that will protect hotels here from such extreme losses. They anticipate bringing laid off employees back sooner, with some locations reopening earlier this month.

Between mid-May and the end of June, Worker Adjustment and Retraining Notification Act notices filed with the state Employment Security Department show over 1,000 employees will have been temporarily laid off at hotels on the West Side, while 596 will have been permanently laid off.

A large number of the state ESD notices filed in June are also hotels disclosing layoffs that occurred in March when the pandemic hit, at nearly 2,000 temporary layoffs.

However, industry observers here say Spokane has the advantage of having a diverse mix of hotel sizes, most of which aren’t dependent on conventions to meet revenue thresholds. Smaller hotels in Spokane Valley are already starting to see modest gains in occupancy rates and bring employees back, contends Dean Feldmeier, general manager of the DoubleTree by Hilton Spokane City Center hotel.

“I just don’t think there’s going to be a moment of reckoning, where they’re saying we have to lay off people permanently,” says Feldmeier.

As of early June, no permanent layoffs at Spokane-area hotels had been reported to the state via WARN notices.

Feldmeier, who is also a board member with the Spokane Hotel Motel Association, says the outside perception of Spokane as a smaller city that is outdoor centric has helped maintain some of the leisure side of hotel stays through the shutdown, especially at hotels that are located closer to trailheads and outdoor recreation.

“The reality is hotels are filled, generally speaking, by three kinds of business: business travelers, leisure travelers … and then there’s also group conferences,” he contends.

Groups will likely be the last to return to normal rates because of fears surrounding the coronavirus and the restrictions on large group gatherings, he says.

Further, as the weather starts to warm up, he says he anticipates continuing to see upticks in people traveling to the Spokane area. Most of the hotel’s business stems from within a 300-mile radius of Spokane, he says.

The DoubleTree downtown laid off roughly 110 employees when the state shutdown and travel halted in mid-March. The company has upwards of 200 employees currently working, Feldmeier says.

The remaining employees are scheduled based on how busy the company is, while those that are currently laid off will likely be brought back once the hotel’s restaurants reopen and demand picks up, he says.

Feldmeier says DoubleTree has been open during the pandemic, as hotels were considered essential businesses, but both restaurants in the hotel are currently closed.

Visit Spokane reports the city saw $21.9 million in lost revenue between March 15 and May 2, as more than 35 events were canceled because of COVID-19, leaving nearly 30,300 hotel rooms unfilled. Those losses don’t include the cancelation of the NCAA Tournament that was to be held in March or the annual Bloomsday run, which typically occurs early each May.

Hotel occupancy was down 64% compared to the same period last year, according to Visit Spokane.

Spending by tourists throughout Washington state has dropped $3.8 billion since the beginning of March compared to 2019, the Washington Tourism Alliance reported earlier this month. On average, traveler spending has seen losses of 77% over the last 12 weeks, the alliance report states.

Hotel room revenue alone has declined 72% between March 1 and May 23, according to the report.

Visitors spent an average of $60 million a day in the state last year, with direct visitor spending totaling $21.9 billion, up 4.5% over the year prior. In 2019 alone, tourism generated $10.9 billion in direct state gross domestic product.

The state’s tourism industry supported more than 165,000 jobs in 2019, an increase of 2.3% over the year prior. Tourism jobs represent 3.5% of all jobs in the state, but economic activity generated by visitors supports a total of 5.1% of all jobs in Washington, says the alliance report.

The tourism and hospitality industry accounts for roughly 2.5% of all jobs in the Spokane area in 2017, according to the Washington state Employment Security Department.

“The small, focused service hotels are doing generally okay,” Feldmeier says, “Though nobody is satisfied with the level of occupancy,” which he contends is about half of what it normally averages.

However, the hotel has seen increases in bookings over the last few weekends, he says, as people begin to venture out of their homes.

Matt Jensen, corporate director of sales and marketing for the Davenport Hotel Collection, says the company furloughed all of its roughly 1,200 employees when the pandemic hit, and has since been systematically bringing them back as the need arose.

“We’ve been cautiously optimistic,” he says. “As business picks up, we’ll bring more people back.”

The company reopened the Historic Davenport Hotel on June 11, with limited services, he says.

“A lot of it is mandated by the governor,” he says. “A lot of it is out of our control as far as how fast we can come back. We still can’t have meetings of more than five people. There are a lot of restrictions that are keeping us from reopening. We’re in that wait-and-see zone.”

What happens next is dependent on when the county can move to the third phase of the state’s reopening plan, Jensen contends.

“Summer’s coming and that’s usually the peak season with leisure travelers. North Idaho is in phase four, and they couldn’t be busier with travelers and restaurants,” he says, adding, “… (the pandemic) has had a tremendous impact and will continue to have a tremendous impact.”

Jerry Dicker, owner of Spokane-based GVD Hospitality Management Services Inc., says, “The state of the market downtown is exemplified by the fact that Mr. Worthy closed four of his five hotels.”

Ruby Hospitality, which is owned by Dicker, itself laid off about 100 employees in mid-March. Currently, two of the company’s four hotels in Spokane are open. The group also has a location in Ponderay, Idaho.

Dicker adds that many of the hotels located in downtown Spokane rely on people traveling to Spokane to attend shows at the local event venues such as the Bing Crosby Theater, the Fox Theater, and the Knitting Factory, which remain closed to the public.

“The disruption in travel has definitely made it more difficult for all the hotels,” he says. “We’ll get a good idea of how the market is going as the hotels start reopening, but they can’t financially reopen unless the demand is at a certain level.”

Hotels usually average between 50% to 60% occupancy, he asserts, adding he estimates in Spokane they are currently averaging a 20% occupancy rate. He adds roughly half of the rooms typically available downtown are currently closed.

Some hotels and restaurants have received temporary help through loans from the Paycheck Protection Program, he says.

“If the pandemic continues and it is not substantially abated, then you would think that more damage is to come, but no one knows for sure. We’re getting mixed messages,” he says.

Even if a hotel is currently open, it’s likely running at an economic loss, he says, adding that some may be in a position to absorb the losses, while others will try to decrease costs. Unfortunately, for hotels the largest cost tends to be labor, he says.

He adds, “It’s legitimately a difficult situation. How it’s going to play out, I don’t know. Most people right now are undergoing the most stress of their business career.”