Standardized test scores decline, but so does colleges’ emphasis 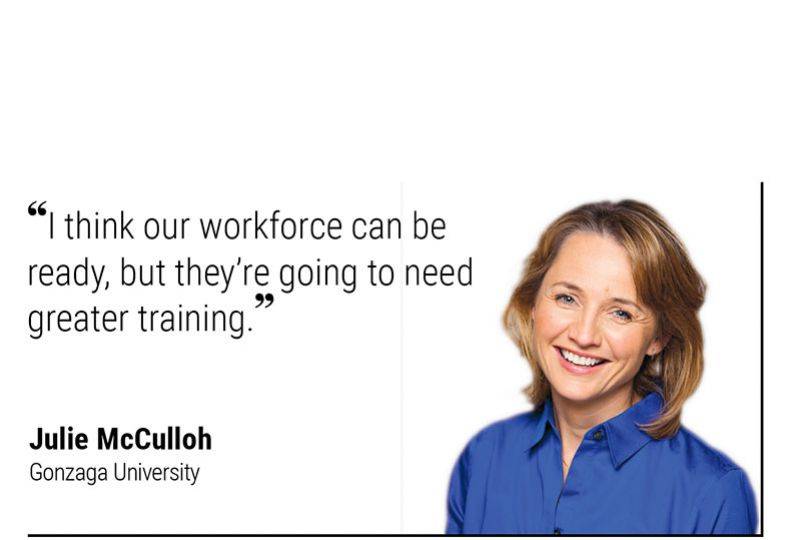 Although average standardized test scores for the high school class of 2022 declined nationwide, some university representatives here say those test results mean little for admissions teams, as many Washington state schools are dropping requirements for students to take the test or to submit scores.

Julie McCulloh, associate provost for enrollment management at Gonzaga University, says aptitude test scores declined because of a limited ability to teach and learn during the pandemic.

“In that difficult circumstance, you aren’t going to achieve the same learning outcomes that you would during a nonturbulent time,” she says.

She and other admissions officials say declining test scores aren’t a major concern because higher education institutions were already moving away from requesting standardized exam results as part of admissions requirements while more information about the disadvantages of the tests for students became available.

McCulloh says, “Test-optional was accelerated because of the pandemic but a lot of schools were moving toward test-optional before the pandemic, so the momentum was already there.”

Greg Orwig, vice president of admissions and student financial services for Whitworth University, says the university has been test-optional for about 15 years after recognizing that standardized test scores in the college admissions process had been a historical barrier that prevented many students from admission consideration.

Orwig says that at Whitworth, “We believed there are good students who aren’t necessarily good standardized test takers, and we didn’t want a test score alone to either discourage or prevent those good students from enrolling at Whitworth.”

Jaraysi describes EWU as a test-blind school, meaning the standardized test scores aren’t considered for admissions, even if they’re submitted with an application. Eastern’s testing policy changed from test-optional to test-blind in August.

As a result of the test-optional and test-free movement, schools have prepared alternative support programs for students who experienced a learning disruption during the pandemic and need help to catch up.

Because of the potential learning gap brought on by COVID-induced shutdowns, McCulloh says Gonzaga has been more creative in finding ways to support incoming students academically. Those supports include adding extra credit, extra days of learning, and by having more student-to-student tutoring, mentoring options, and advising sessions available.

“We recognize that more time will need to be spent on fundamentals,” she adds. “I think our workforce can be ready, but they’re going to need greater training. That’ll fall to employers, colleges and universities, and anybody who’s in the business of educating or training. They’ll have to do some greater foundational work because of the time lost during the pandemic,” McCulloh says.

Orwig says schools can help incoming students who need to catch up, or recover from pandemic learning disruptions, by adding supplemental instruction and other academic and emotional support.

Whitworth can spot students who may need more support through interviews with those who show academic concerns on an application, he claims.

“Whitworth does a holistic review of applications with no minimum GPA requirement or test scores,” Orwig says.

Jaraysi says COVID has changed learning patterns and EWU is prepared to support students with bridge programming with one to four-week courses for students to get the skills needed for college-level classes.

Eastern also offers core classes in English and math with faculty support to help students get up to speed.

ACT, originally American College Testing, is an Iowa City, Iowa-based nonprofit that provides learning resources and assessments for college readiness and administers a standardized test that had commonly been used as a metric for college admissions.

The nationwide average ACT composite score for the high school class of 2022 was 19.8 and marked the fifth consecutive year of declining average scores, with 42% of high school seniors failing to meet college-readiness benchmarks across the U.S., the ACT organization reports. According to BestColleges.com, a “good” ACT score is at least a 24.

ACT data shows that in Washington state, 7% of high school graduates took the ACT in 2022 reaching an average composite score of 24.6.

SAT is another standardized test originally known as the Scholastic Aptitude Test. SAT average test scores also dropped, to 1050 in 2022, a decline of 10 points from 2021, according to the New York-based nonprofit College Board, which administers the test.

Critics of the standardized test score requirement for college admission say high school transcripts provide a better prediction of first-year college success than the ACT or the SAT.

Orwig contends that the standardized tests are biased toward students from high-income families who can afford the cost of test prep courses and have the means to take more than one test to prepare.

University representatives also say the test-free or test-optional movement is likely to stay in place partly due to the challenges of administering tests during COVID-related shutdowns and safety measures, which are still impacting higher education institutions.

Larson says that taking standardized tests during the pandemic was a burden for students to contend with, including rules for face masks, social distancing, and changing online or in-person testing requirements.

“Eliminating tests really does provide significant benefits to students in rural communities who would otherwise be waking up at 3 a.m. to take a test in a city, or to students and families facing financial challenges. If we can reduce those barriers, it helps us attract more students and help students earn a four-year degree that can be productive for employers in the community,” Larson says.

Since eliminating the test requirements EWU and Whitworth have noticed a boost in applications.

“When we started as test optional, we definitely saw a majority of our applicants not submit test scores,” Jaraysi explains, adding that for students it’s easier and less time consuming to submit only an application and transcript.

Jaraysi says, “We’re seeing applications getting completed faster, and that means students are getting a decision from our office a lot sooner than before because, sometimes, the test scores would hold students up in the review process.”

In the last three years, EWU hasn’t had any drastic changes in the quality of applications or in the population of students that have applied to the school, she says.

Larson says test advocates contend that aptitude test scores can help schools find students who excel in specific subjects. He notes, however, the overall hassle to students doesn’t make up for the minimal value the testing provides.

He says a majority of public institutions in Washington, Oregon, and California also have moved to test-optional or test-free policies for this reason.

Instead of considering standardized test scores in the college admission process, EWU, Gonzaga, and Whitworth leaders say they evaluate a variety of alternative measurements, often giving the most weight to a high school student’s GPA as the strongest predictor of college success.

McCulloh says Gonzaga hasn’t decided if the institution will remain test-free indefinitely and will need to gather more data.

“I think a lot of schools like us are on an indefinite status while we gather information. I don’t anticipate going back because I think the tide has shifted, but I also don’t want to be definitive, because we’re still in the COVID generation,” McCulloh explains, adding that universities will be dealing with the consequences of pandemic learning for a while.

More applicants will result in a larger, more educated workforce, he says.