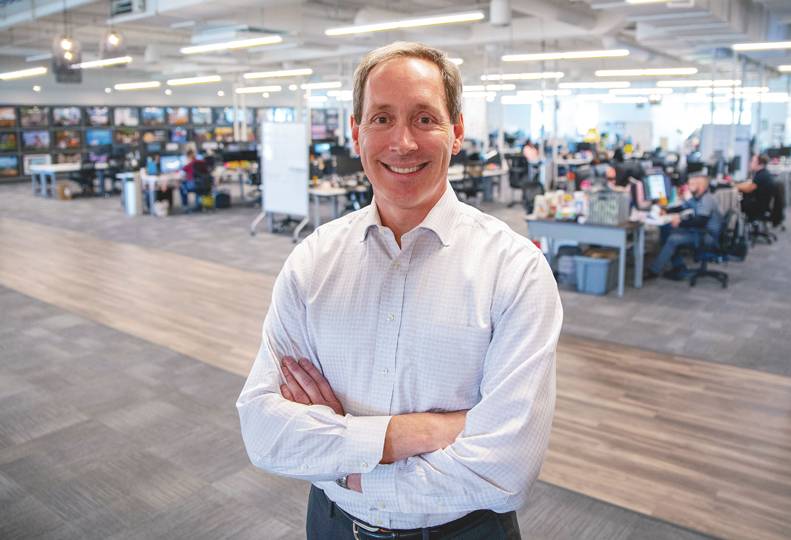 -—Stay Alfred Inc.
Steve Helmbrecht, shown here at Stay Alfred’s headquarters, joined the company as president and chief financial officer at the beginning of this month.

Helmbrecht started in his new position May 1.

Jordan Allen, founder and CEO of Stay Alfred, says, “We’re not a bright-eyed and bushy-tailed startup anymore. We’re stepping up into the major leagues of business, and it was critical that we bring him on.”

Stay Alfred has nearly tripled its annual revenue, growing to $66.5 million in 2018 from $25.2 million in 2016. Helmbrecht estimates the company will nearly double its revenue this year.

The company recently announced plans to host a call center hiring blitz to fill up to 30 entry-level positions at its corporate call center. The company currently employs about 230 people, and it expects to grow to about 400 employees by the end of the year, says Allen.

Stay Alfred currently operates in 32 cities and has over 1,500 apartment units it rents out as vacation rentals. That number is projected to double in the next year.

“I believe we’ve added more units in the first quarter of this year than all of last year,” Helmbrecht says.

“We also intend to expand internationally this year,” he adds. “We’re primarily focused on what we call the EMEA market - Europe, Middle East, and Africa.”

Prior to joining Stay Alfred, Helmbrecht worked as the CEO of Spokane-based private investment company Lakeside Capital Group. He also spent nearly 10 years as the executive vice president and chief financial officer of Liberty Lake-based Itron Inc., an energy and water technology and services company. In a way, the move is a homecoming of sorts for Helmbrecht. Stay Alfred is headquartered at 2818 N. Sullivan, in the building that housed Itron’s headquarters when Helmbrecht first joined that company.

Tom Simpson, a member of Stay Alfred’s board, said via email, “We’re absolutely delighted to have him (Helmbrecht) on the Stay Alfred team. Steve’s skill set totally complement’s Jordan’s - like Orin Smith complemented Howard Schultz in the early days of Starbucks.”

Helmbrecht says his previous experience with raising capital and helping publicly traded companies expand internationally were skills Stay Alfred was looking for in its new president.

“What Jordan and the board wanted was someone who could come in and help execute the vision we have,” Helmbrecht says. “It all comes from a position of strength; let’s take what we have here today and continue to grow, and that’s what excites me the most, I’m coming in here to build on a successful platform and help it grow.”

Helmbrecht, who has helped set up international operations for a publicly traded software company, says, “I have a lot of hands-on experience with international growth.”

Allen adds, “He lives in Spokane, but he’s really an international powerhouse … he’s extremely well connected, and his values really match up with ours.”

Despite the company’s strong growth, Helmbrecht says it currently is not planning on going public.

“I think that’s certainly an option going forward, but not in the near term,” he says.

Instead, the company intends to continue its focus on growing the Stay Alfred presence and brand.

“What we really aspire to be is the market leader across the board,” he says. “We think that’s going to give us a lot of options going forward in terms of capital markets.”

Beyond growth, Stay Alfred is also focused on investing in technology, software, and hardware to enhance guest experience, Helmbrecht says.

New technologies include automatic door locks and being able to use a smartphone to access the buildings, he says.

During Helmbrecht’s first week aboard Stay Alfred, he traveled with the team to Seattle to attend technology news website GeekWire’s Tech Titan awards, for which Stay Alfred was a finalist.

“It just speaks to the company that we value people here and we value that longevity,” Helmbrecht says. “I thought it was terrific to be able to spend time with those who were here from the beginning.”

He says it was that dedication to the people and the community that drew him to the company.

“That’s something I looked for in the next company that I wanted to be part of,” he says. “And I asked that question: ‘Are we just headquartered here, or are we committed to the community?’ And it’s absolutely the latter.”

Allen founded Stay Alfred in 2011 and offered only one apartment unit. The company grew to $25 million in revenue without using outside funding.

While Helmbrecht has extensive leadership experience, he says he has stepped into an industry that’s new to him.

“The industry is different for me,” says Helmbrecht. “I’ve tended to work more in the business-to-business market … here we are creating a new category and are part of a fast-growing category of being a travel apartment provider.”