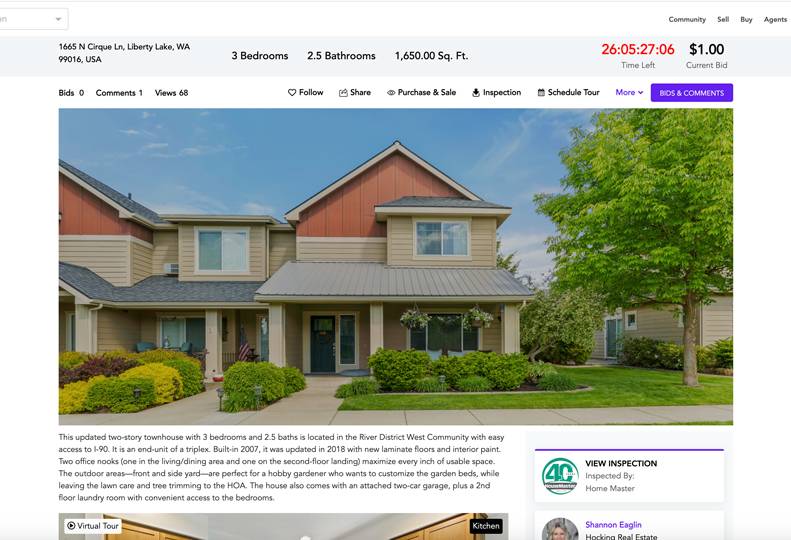 Jordan Allen, founder and CEO of the now-defunct vacation rental company Stay Alfred, is starting the next act of his entrepreneurial career with the launch of Ruumr Inc., an online residential real estate bidding service.

The company launched its website, ruumr.com, earlier this month. Its first listing, a three-bedroom townhouse in Liberty Lake, went live on June 10.

Jordan describes Ruumr as an online offer platform for residential real estate agents. He contends Ruumr, pronounced like the word “rumor,” is distinct from other real estate auction platforms.

“Auction sites are essentially built to liquidate bank-owned real estate,” he says. “We partner with the agents. We’re not looking to take the real estate agents’ commissions, customers, and listings.”

To date, Allen says Ruumr, which is based at 518 W. Riverside downtown, has secured roughly $4 million in “soft commitments” from investors.

“This is the first one I’ve been pitched that I thought I would like,” Tampien says. “This is supportive of my agents, and they can get behind it.”

“We have deep, deep real estate relationships in those markets and then we’re going to scale nationally... fast,” he says.

Allen says he’s used the personal and professional contacts he’s made through Stay Alfred to help develop Ruumr and to launch the new website.

In addition to Allen, people working on Ruumr are former OddJobbers CEO Nick McLain; Matt Melville, who spent 15 years as director of financial planning and analysis at Itron Inc. before leaving for Stay Alfred in 2019; and San Francisco-based Sean Tedore.

The launch of Ruumr comes a year and three weeks after Stay Alfred became one of Spokane’s first and most visible business casualties of the COVID-19 pandemic.

Stay Alfred, which Jordan founded in 2012 following a seven-year stint in the U.S. Army, was a darling of the entrepreneurial community in and beyond the Spokane region until it met a quick demise last year amid travel restrictions.

In 2019, prior to the pandemic, the company topped $100 million in revenue, offered 2,500 vacation rental units in 33 cities, and had over 200 employees, with 146 of them based at its Spokane Valley headquarters.

“There’s some final odd and ends we’re going through,” Allen says of Stay Alfred. “The company is over with.”

Allen says his aim with Ruumr is to remove much of the guesswork involved in bidding for a house.

At its core, the platform is designed to give interested buyers a more accurate view of their chances to secure a home.

Ruumr generates its revenue by securing 1% of the purchase price from the buyer, and listings must be submitted through real estate agents.

With a passion rooted in real estate investment and technology, Allen says he’s bought and sold close to 100 homes in the Spokane region. In the last six months, he estimates he’s submitted at least 30 offers on homes and lost out on each.

“Sometimes, I submit three offers on the same place, and it takes five or six days just to find out I lost out on all of them,” he says.

Ruumr’s goal is three-fold: let buyer’s see how much it takes to win a bid, allow sellers to get the highest price for their home, and allow real estate agents to earn more while freeing up their time in the bidding process, he says.

In today’s competitive housing market, Allen says buyers are often left speculating on final sale price and seldom know the terms, if any, that buyers are willing to accept to complete a sale.

Bids through Ruumr start at zero, although each property has an unpublished reserve price that must be reached before a sale is approved, he says.

“We let the market determine the pricing,” he says. “One of the worst things you can do is price too high.”

“And each one of those offers takes an agent 45 minutes to create,” he says. “There are homes in Spokane with 45 offers on them right now.”

Under the current market, real estate agents are struggling to find properties for their clients with time for them to jump into the bidding process.

For example, 4 Degrees’ Tampien says, “Most cash buyers take us out of market, so none of our conventional buyers can get homes.”

Ruumr makes it easier for people with conventional financing to stay in the game, he says.

“Now the seller gets to pick the terms,” Tampien says. “If a VA-financed offer is the biggest, the seller can pick that.”

Such auction sites aren’t that busy now, because they don’t have the inventory they had from 2007 through 2012, he asserts.

Ruumr, on the other hand, is designed to be “complementary to everybody in the industry,” he says. “It helps lenders, it helps agents, it helps buyers, and it helps sellers by giving them more exposure.”

The current bidding process is a “weird guessing game,” he contends. “It’s crazy to me.”

With Ruumr, the bidding process is much more transparent, Tampien claims.

“Instead of randomly guessing how much to go over the list price, you get to see it,” he says.

Allen says the three-most common questions from investors are: “Why hasn’t this been done before, what happens in an economic downturn, and what’s the strategy to get to scale?”

“We’re in such a home shortage here and across the country that the gap just keeps getting worse,” he says.

While the concept for Ruumr was developed in the current sellers’ market, in which inventory is tight and prices are escalating, the model also would work in a buyers’ market, when supply outpaces demand, Allen says.

“It works in an up or down market,” he claims. “It works anytime buyers are competing to determine value for home.”