Double-digit percentage price increases are common for most materials 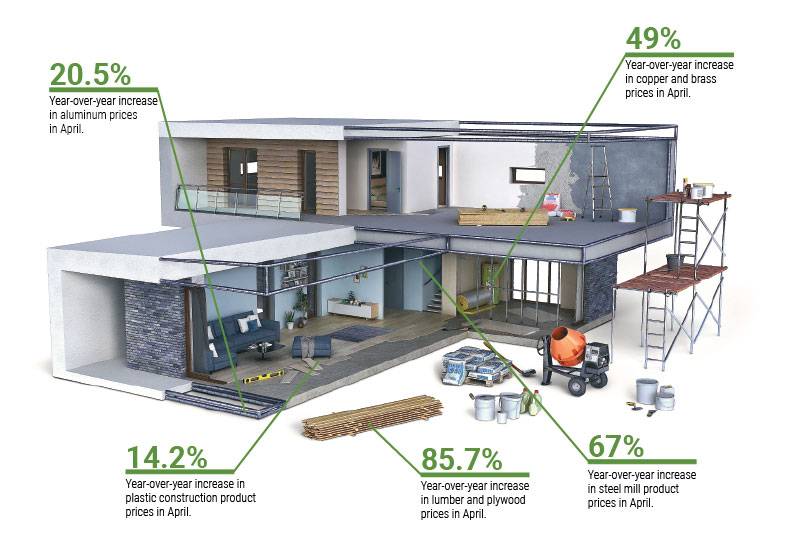 Contractors here have seen staggering material cost increases over the past year as surging demand and supply chain bottlenecks have pushed prices to record heights, and many predict those issues won’t end this year.

Costs started rising at the end of last year, and that trend only continued as “everything else started to fall behind,” says Cheryl Stewart, executive director of the Inland Northwest chapter of Associated General Contractors of America.

Diesel fuel saw the largest year-over-year price increase in April, at 126.7%. More recently, the Colonial Pipeline was shut down in early May following a cyberattack, causing a run on fuel and resulting in shortages across the country.

Stewart says steel stud, used for building framing, costs increased 15% in June and have already been confirmed to be increasing another 10% in July. The prices are expected to increase again in August, she says.

Contractors and do-it-yourselfers also can expect to see price increases in paint of between 3% to 7%, according to a market report from Coatings World, a journal specializing in the coatings industry, as shortages of monomers and resins, which are key ingredients in paint, increase pressure to raise prices.

The report also notes that some suppliers of acrylic emulsion, which is used to create waterproof acrylic paints, initiated a 3% to 5% price increase at the start of the year.

Lumber prices decreased for the first time in months during the last week of May Stewart adds, though she notes that’s not likely to continue, and was likely a result of a slight market correction.

“On the lumber side, while the domestic supply is strong, we typically also pull a lot from Canada and right now the tariffs on Canadian lumber are part of what’s driving up the price,” she says. “We’re working on a national level to help get relief on some of the Canadian tariffs on lumber to help meet the demand.”

Canada, the world’s second largest exporter of softwood lumber, currently is subject to U.S. duties ranging from 5% to 20%. The U.S. Department of Commerce had cut softwood lumber tariffs to 9% from more than 20% in December 2020, before more than doubling them in May.

The National Association of Home Builders estimates that record-breaking lumber prices alone have added $24,000 to a home’s price tag in 2021.

Supply shortages and increasing prices have yet to show a demonstrable effect on project demand, but likely will slow or outright halt projects if the trends continue, Stewart asserts.

“Schedule delays will probably be the biggest impact we’ll see,” says Stewart. “I think we will see a slight decrease in projects moving forward, a lot of people who wanted to build will get sticker shock, and that will cause a delay in some projects.”

Only paving mixtures and block prices declined in April 2021 compared to a year earlier, with a 2.2% decrease.

“We haven’t seen much of an increase in concrete or cement,” says Stewart.

She adds, however, concrete and cement prices likely will increase soon, as the industry is currently experiencing a shortage.

Most of the supply issues resulted from bottlenecked demand when factories and mills were shut down during the pandemic.

Many contractors thought construction work would halt as well, contends Stewart, but construction in a number of states only saw brief pauses before being allowed to resume in full.

Many of the factories that have reopened have experienced delays in ramping up production of materials and labor shortages as employees declined to come back to work or found jobs in other industries.

The industry also has seen slowdowns in materials transportation, which has been hampered by labor shortages and increasing costs as well, adds Stewart.

Altogether, this has led to uncertainty in materials costs, contends Stewart, who adds that contractors currently are getting price quotes that are only good for 10 days in some cases.

“Usually, even if a project bids at a certain time, it won’t start for another two months,” she says.

To accommodate price uncertainties, some contractors have begun writing into contracts cost escalators, which are formulas to allow for project cost fluctuations in line with construction material cost increases.

Price guarantees for some steel products have been as short as five days, while most manufactured building components are seeing six month-plus delivery dates, says Clancy Welsh, president of Garco Construction Inc., of Spokane.

“We haven’t seen, at least in my 25 years, that type of long lead time,” he says. “That schedule impact is really something that we’re trying to take a look at and understand, so we don’t over-promise and under-deliver.”

Garco handles several longer-duration projects, and those short price guarantee windows have been a challenge for the company, he adds.

“There are many different reasons (for the cost increases), all circling around there’s still more demand than the supply chain can handle,” he contends.

Welsh says he’s surprised that the supply shortages and price increases have continued to trend upward in mid-2021.

A number of those in the industry thought the prices would see “some type of recoil,” says Welsh, because the steep price increases over the last year would have led to a drop in demand.

“But with the demand levels still high, the market is still testing what type of increase limits will have an impact on that. I think, sooner or later, that’s how we’ll see it level out or reduce,” he says.

Only a few of the company’s ongoing projects have been impacted financially by the price increases, he says. Most of the projects in the works by the company had prices locked in at the time the project was awarded.

Garco mainly works in the public sector, primarily in state and federal government projects, says Welsh. Only a small percentage of the company’s portfolio is private.

Spokane is still ripe with opportunity, which is why Welsh says he doesn’t expect to see a downturn in this year.