Median prices are going up with demand, remain below South Hill, Valley values 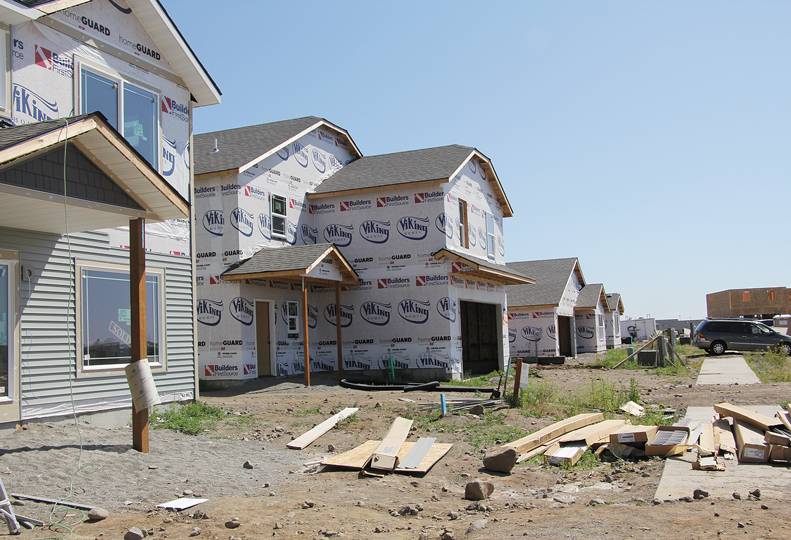 -Kevin Blocker
Viking Homes erects houses in an Airway Heights subdivision. All of those pictured have been purchased already.

Karen O’Donnell, a real estate broker with Coldwell Banker Tomlinson, has worked as a broker in the region since 2002, and has marketed newly constructed homes since 2008.

O’Donnell is currently working with Spokane Valley-based Viking Builders LLC, to market new homes in a subdivision called The Traditions, in Airway Heights. The subdivision is at the intersection of King Street and Third Avenue, a couple of miles north of Highway 2 and west of Airway Heights Corrections Center.

Single-family homes being built now sold months ago, and right now, she’s executing closings on homes not scheduled for construction until the first quarter of 2021.

“We sell them before they’re built,” O’Donnell says.

With Amazon.com Inc.’s 2.6 million-square-foot fulfillment center, AT Acquisitions LLC’s planned 187,000-square-foot industrial park, and Exotic Metals Forming Co.’s plant expansion, among other activity nearby, builders on the West Plains are going to be pressed to keep up with demand for housing in the coming years, O’Donnell says.

Airway Heights population growth in the last decade has been fueled in part by what was then viewed as more affordable housing by Spokane-area residents looking to buy a home.

According to Spokane Association of Realtors data, the median price of a home on the West Plains increased to just over $266,000 last year, up from just under $235,000 a year earlier. The 2019 median price was higher than homes sold on the North Side and in the unincorporated county, but still lower than South Hill, Spokane Valley region, and downtown Spokane.

Airway Heights city officials and developers now are feverishly strategizing about how to accommodate future growth.

A decade later, OFM estimates the city has experienced a nearly 64% increase in population to just above 10,000 residents, according to that department’s April 1 report.

That represents the largest rate of growth experienced by any city within Spokane County. Liberty Lake is second on the list and expects to see a 51% increase to a projected 2020 figure of 11,500 residents from 7,591 for the 2010 census, according to OFM data.

Tom Clark, president of the Spokane Realtors Association, says Spokane County as a whole is in the midst of a good news, bad news scenario as it relates to affordable and available housing.

No other city in the county can claim that motto more than Airway Heights, Clark asserts.

“Airway Heights has incredible potential,” Clark says. “The concern many of us have for the city is a lack of housing. Supply is limited, and demand is high.”

Since the Great Recession of 2008, financial institutions generally have been more conservative about lending to homebuilders for development of larger tracts of land, he says.

Toby Broemmeling, the executive director for the West Plains Chamber of Commerce, says the chamber is using its position to act as a liaison between builders, municipalities, and the Spokane County Commissioners to find ways to create more available housing.

“We have a seat at the table to be able to advocate for builders and cities for more housing,” Broemmeling says of the chamber, which also represents Cheney, Medical Lake, and unincorporated areas of the county west of Spokane.

Echoing Clark, he says Airway Heights has more housing demand than what can currently be supplied.

Despite the demand, the chamber isn’t a proponent of unbridled growth.

“We want jobs and people here, but we want well-planned growth,” Broemmeling says.

Joel White, executive officer of the Spokane Home Builders Association, says it’s going to be challenging for Airway Heights to meet its future demand for housing.

White says there is a provision within the GMA that allows individual municipalities to petition to build outside immediate GMA-designated zones.

However, White wonders if an anticipated influx of new workers to fill pending manufacturing jobs will tax an already burdened construction sector.

There has been an overall labor shortage in the construction industry for a few years now as younger generations have chosen other career paths, White says.

Meanwhile, White says that from a geological perspective, the heavy presence of basalt rock in the ground presents stormwater and runoff challenges for builders in Airway Heights and other parts of the West Plains, an issue developers there have grappled with for years.

Despite the obstacles, White says he’s optimistic Airway Heights and its community partners eventually will meet the housing challenges there.

“There are a lot of great partnerships currently in place,” White says. “It will happen ... we’re at a point where it has to happen.”