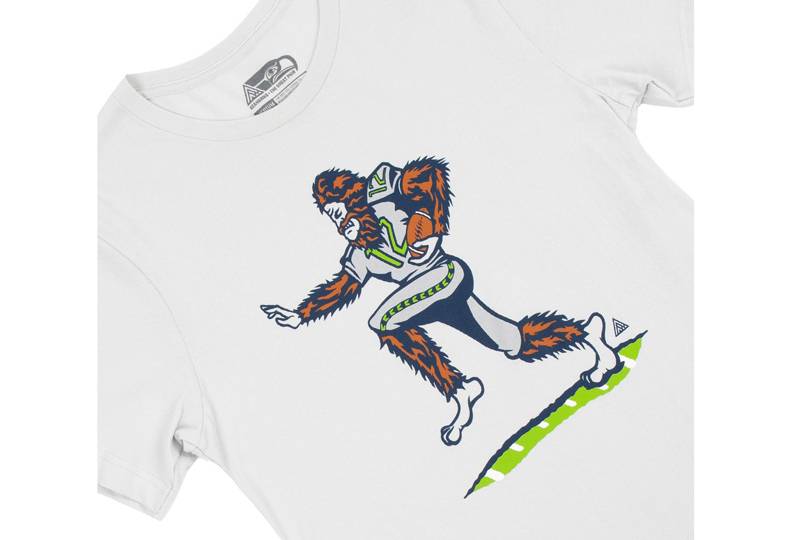 Editor's note: This article has been corrected to reflect the relationship between the Great PNW and its printing partner.

Ten months ago, the Seattle Seahawks reached out to collaborate with the Spokane-based clothing company, says The Great PNW owner and founder Joel Barbour.

“Funny enough, we were so busy, we missed the email. But they followed up and really quickly—a phone call and an email later—the whole process got started,” says Barbour of the collaboration.

The collaboration came about due to the first part of the pandemic that restricted fans from attending live football games, where the NFL sells a majority of its merchandise. For months, merchandise stores were also closed.

The NFL then decided to create a program that allowed each team to collaborate with a local clothing company for one season with the intent to help bring awareness to the local business, drive up revenue, and create new markets, Barbour explains.

“So, the Seahawks were then in the hunt for the right fit, and we were the fit,” Barbour says.

Although The Great PNW has had a handful of big collaborations, the deal with the Seahawks is by far its biggest, says Barbour.

“I don’t know what could top the PNW collaboration with the Seahawks,” says Barbour.

The Great PNW designed 20 items of clothing that were then streamlined into seven items in negotiations with the NFL licensing team, which takes a percentage of the gross profits.

Barbour declines to disclose the licensing fee except to say it’s a typical flat percentage.

The Squatchback T-shirt, as the name suggests, is the fabled sasquatch in a Seahawks uniform running through the football field with a ball in his arm. Thus far, it’s the most popular item being sold.

“It’s just fun. It’s the sasquatch, the Seahawks, it’s Northwest,” says Barbour, adding that it’s one of his favorites as well.

The line of merchandise was launched online and at Lumen Field on Oct. 25. Because of the licensing deal with the NFL, merchandise must be purchased online or at the Seattle stadium.

Barbour says sales have been strong since the launch, and there already has been talks of continuing the collaboration into next season.

The Great PNW worked with its printing partner, Bison Printing LLC, of Spokane, which printed all of the Seahawks merchandise, totaling over 17,000 units, Barbour says.

The clothing department of the company has six employees and is projected to reach over $1.5 million in revenue for 2021, according to Barbour.