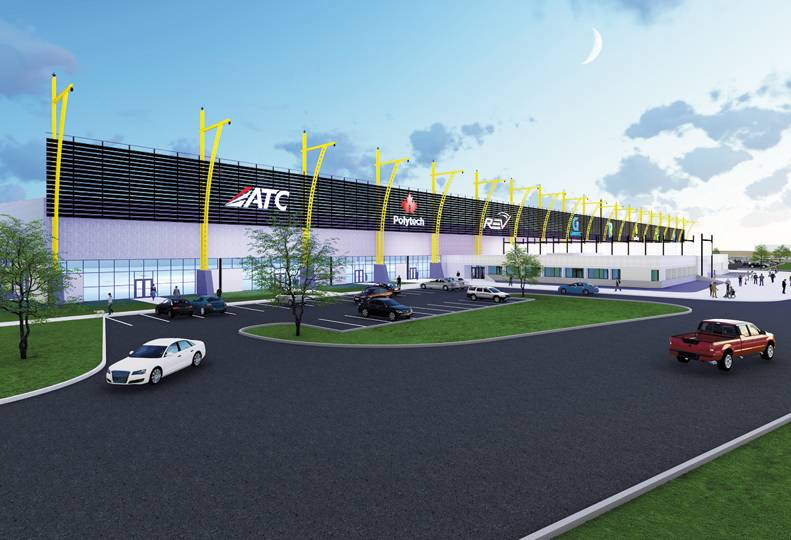 -—Architects West Inc.
The Triumph plant on the West Plains is to be converted into a mix of shared space as part of a $15 million project there, one principal in Lakeside Cos. says. 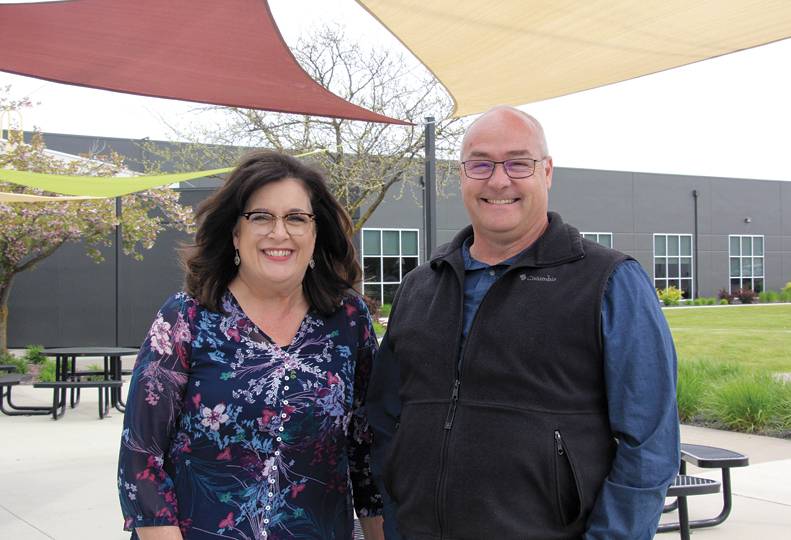 -—Erica Bullock
Ann Long and Jason Kindred expect renovations at the old Triumph plant to begin next spring and to be completed by fall of 2023.

Lakeside is partnering with Ann Long, co-owner of Burbity Workspaces LLC, a Liberty Lake-based coworking business, to develop and operate a 28,000-square-foot coworking office and event space on the campus and a co-warehousing hub in the manufacturing facility behind the offices.

“That large office space that sits out in front of the rest of the warehouse, that’s the space that we’re planning to convert to a coworking and event center,” Kindred says.

Long says that space will provide opportunities to host events that bring entrepreneurs together.

“That could really kickstart the overall entrepreneurial community in Spokane and get these businesses off the ground,” she says.

The coworking building will have a mix of open space and work areas that allow workers from different businesses to share office space, allowing cost savings and the use of common amenities. The spaces will include private offices with 80 to 120 square feet of space, team suites with 300 to 500 square feet, and an event center with moveable walls so it can be configured to accommodate 100 to 150 people. The facility also will have a café, lounge areas, and conference rooms, Long says.

The massive warehouse building will be developed into a co-warehousing facility, which also will be operated by Burbity Workspaces.

“Those two will be able to complement each other,” Kindred explains. “One of the big things we’re looking to do is create a strong incubator type of atmosphere, which I think plays into the coworking space and co-warehousing space and Lakeside’s ability to be involved in building an entrepreneurial framework of the area and be involved in those types of activities.”

The co-warehousing spaces will be marketed to businesses that are outgrowing their current spaces yet aren’t big enough to warrant renting an entire facility on their own, such as online retailers, consumer packaged goods companies, and fulfillment companies, Long says.

Those businesses at the co-warehouse will share docks and other equipment and resources that can help with shipping and receiving, and spread out the overhead costs for affordability, Kindred adds.

The rest of the warehouse will be converted into larger warehousing suites, better suited for larger, more established companies, she says.

Pre-development conference application information on file with the city of Spokane shows the estimated cost to develop the property is about $15 million.

Renovations for the coworking and event space will begin next spring and be completed by fall 2023, they say.

Architects West Inc., of Coeur d’Alene, is designing the project. Bouten Construction Co., of Spokane, has been selected as the contractor, Kindred says.

Kindred says the Terminal 7 name recognizes nearby Spokane International Airport and the aerospace roots of the building as a former Boeing Co. facility, and most recently the Triumph aerospace manufacturing plant.

“We’re trying to retain a little of the aviation history and feel,” Kindred explains.

Property improvements will begin this summer to create more visibility from U.S. 2. Kindred says those improvements will include cleaning up the parking lot, removing the guard shack and fencing surrounding the site, and landscaping enhancements.

The co-warehousing spaces could be available later this year or in early 2023, Long says. “It’s not as construction-intensive to get it going, and it can be pretty much self-sufficient.”

After the coworking and co-warehousing spaces are set up, retail pads will be built surrounding the facility to accommodate future retail shops or restaurants. A total of nine pad sites are proposed on the property, ranging in size from 18,000 square feet to 141,000 square feet, according to preliminary site plans.

“The hope is that we’re creating enough excitement and energy with the coworking that it will attract the right people who would want to put something along Highway 2,” Kindred says. “It’s such a big building with so many opportunities that part of the process is to get something going and then see what interesting applications come our way.”

Currently, Lakeside has several temporary, short-term tenants with six-month to yearlong leases that are using the excess warehouse space while Triumph continues to consolidate operations, with plans to vacate the site entirely this summer, Long says.

Kindred explains that those companies are primarily using the space as extra storage while Lakeside continues to develop plans for the property.

Both Kindred and Long say the vision for the property was driven by the pandemic and the way it changed how people work. People are moving here from business hubs along the coasts and have created an influx of people who can work remotely, they say.

“We’re seeing that there’s people here who want to work remotely, but not necessarily work from home,” Kindred says. “This is a good opportunity for them. Companies are now reevaluating how to manage their real estate and the cost involved with maintaining a full building.”

Kindred and Long suggest those companies could look to coworking and co-warehousing spaces to rent a team suite or individual office and save on office-space expenses while still providing a quality work environment.

“People are fleeing the more expensive cities and coming to areas like ours. Even here in Spokane, enterprise-sized companies are shedding their workspaces and coming to Burbity Workspaces,” Long says. “All of our coworking spaces in Spokane are doing really well. Demand is increasing and we’re seeing that globally too.”

Kindred contends the timing is perfect for a project of this scope and size. “The building has been around here forever, and we hope to transition it into something neat that helps the community and creates some exciting buzz,” he says.