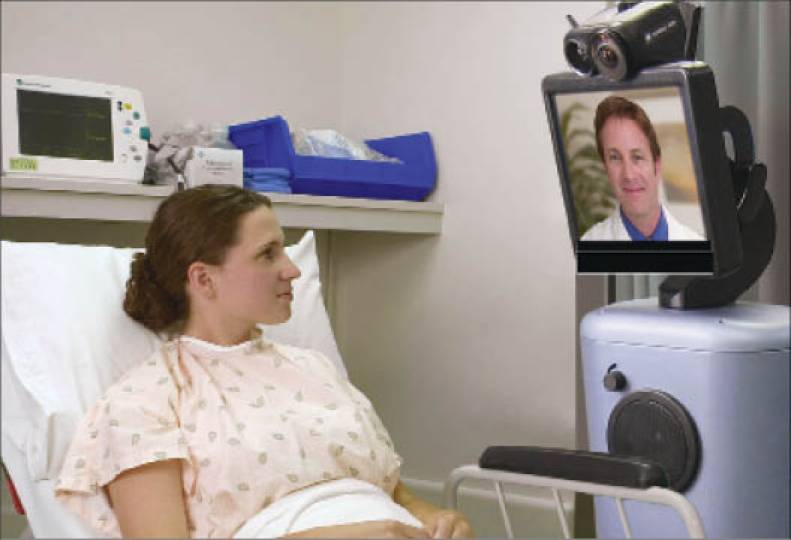 At Lincoln Hospital, in Davenport, Wash., some patients receive care from "Hawkeye." No, not the character from the classic TV show "M.A.S.H." It's a robot controlled by a physician located miles away.

Confera Inc., a fledgling Spokane company that recently changed its name from InHouseTeleMD LLC, provides such real-time physician consultations via robot at three rural hospitals in the Inland Northwest. The company has eight internal-medicine doctors who use the robots to provide care to patients and to offer professional advice to the hospitals' staffs.

For example, if an admitted patient's physician needs to consult with a specialist, he or she can contact Confera, who then will assign one of its hospitalists to the case. The hospitalist then will access a control panel on an Internet-connected computer, and "beam" his or her image into the robot, says Mike Terhaar, the company's vice president of business development.

The robots, made by InTouch Health Technologies Inc., of Santa Barbara, Calif., are equipped with a 15-inch video screen, a camera, and an expansion bay to which an electronic stethoscope, otoscope, or ultrasound can be attached. The 220-pound, armless RP-7 model stands about 5 feet 5 inches tall and rests on a triangular base with wheels underneath. More than 30 infrared sensors allow for assisted driving, and the robot can be moved to a patient's room by a hospital staff member or via remote, InTouch says.

"RP-7 uses state-of-the-art, hospital-grade HIPAA compliant technology to achieve superior audio and visual capabilities," the company says. It says the battery-operated machine is connected to the remote control station "through a combination of secure Internet and wireless technologies."

Using the system, a Confera doctor can see and talk to a rural patient, observe him or her, conduct an assessment, view CT images and lab results, and make treatment decisions in real time, Confera says.

Says Jennifer Neisse, InTouch's spokeswoman, "The remote physicians are able to get a really clear understanding of what the patient is going through. The great thing about Lincoln (Hospital) using the RP-7 robot is that is completely mobile."

The service Confera provides is different from other telemedicine models, in that it offers clinical care rather than just teleconferencing or chart consultations, Terhaar says.

"A lot of companies do the teleconferencing, but there really isn't anybody that does the exact service that we do for the small hospitals," Terhaar says. "We're focusing more on providing this technology and physician care in that rural hospital and keeping the patient there, where it's appropriate."

The physicians offering care through Confera are board certified, with many years of experience and likely also work in Spokane hospitals, says Terhaar, a trained pharmacist. The goal is to work with rural hospital physicians rather than take over the case.

"We are just an added expert," he says.

Having such telemedicine capability at a community hospital can avoid the need to transport a patient to a Spokane hospital, also preventing loved ones from having to drive into town to visit them. The service is available 24 hours a day and helps solve physician shortages in rural areas, Terhaar says.

Since the 25-bed Lincoln Hospital began using Confera's service last November, it has been able to admit patients with more complex problems and provide a higher standard of care, says Tom Martin, the hospital's administrator.

"Traditionally in the past, our doctors have been isolated and didn't have anybody they could consult with," he says. Now, "our doctors have the ability to bring in a specialist, and they can assist with making a decision. If we do admit a patient, we can actually admit a more complex or sick patient because we now have the ability to have the specialist at the bedside virtually."

Those patients might have complex conditions due to diabetes, kidney problems, cardiac chest pains, or infections that need oversight, for example. In the past, some such patients would have to be sent to a larger hospital in Spokane.

"We offer now the same care that that patient would receive in Spokane because the same hospitalist that they would receive care at, say, Holy Family, is 'here,'" Martin says. "We're not going to become a Sacred Heart, but there's a lot that we can do between care we've traditionally provided and the ICU ... and that's the area we'll be moving into."

While Lincoln Hospital's staff and patients might be shocked "meeting" Hawkeye for the first time, they do become comfortable with it, he says. And use of the virtual consultations has been increasing.

As a result, the hospital now offers respiratory therapy full time and plans to build other programs, such as adding speech therapy for stroke patients, Martin says.

He adds that keeping patients in their local community hospitals reduces their health-care costs.

"It's good for the payer, whether it's the insurance company or the individual," he says. "Being able to be cared for by your local hospital is a bargain."

In addition to Lincoln Hospital, Confera has two clients in Idaho, St. Mary's Hospital, in Cottonwood; and Clearwater Valley Hospital, in Orofino. By the end of this year, it hopes to have about a dozen in all, Terhaar says. He estimates the company has performed 60 consultations over the past few months.

The company recently has reached an agreement with a Spokane cardiology practice and neurology group to provide consultations on a contract basis, Terhaar says. In the next 30 to 60 days, Confera hopes to add pulmonary critical care physicians and nurses to its offerings.

The cost of the service depends on the needs of the hospital, and the physicians' consulting fees can be billed to insurance and Medicare, Terhaar says. Hospitals typically rent a robot from InTouch.

Lincoln Hospital, for example, rents the robot from InTouch for about $7,000 a month, but only pays Confera for consulting services when it uses them.

"We're not having to pay for the cost of that specialist on a full-time basis," Martin says.

Confera, a physician-owned group that was launched just over a year ago, employs about 15 people, including its consulting physicians. It is led by CEO Dr. Bob Zurcher, a former emergency-room physician; Chief Medical Officer Dr. Peter Weitzman; Chief Operating Officer Brad Davis; who has more than 20 years of health-care administration experience; and Terhaar.

The company's offices are located at 108 N. Washington, and it markets its services on its Web site at www.inhousetelemd.com.