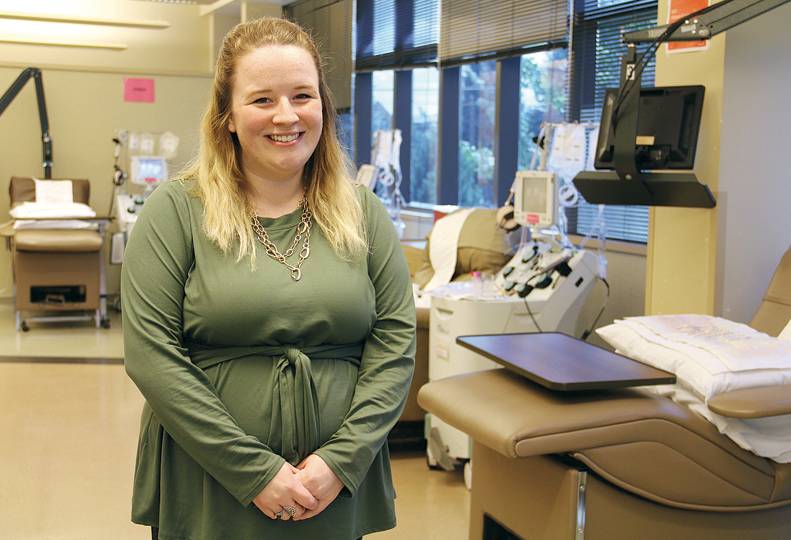 Faced with an increasingly depleted donor pool and a critical need for blood, Vitalant, formerly the Inland Northwest Blood Center, is considering an update to its donor outreach technology in hopes of drawing in younger donors.

The donor alert system, which was launched in 2017, currently notifies donors when their donation has been sent to a hospital or clinic through a simple text message, Tesia Hummer, manager of donor recruitment, says. The organization is looking into adding a short video of a past blood recipient to make the thank you more personal, she says.

“It’s very difficult to get things from actual patients, because at the time, many of these people are just focused on surviving,” says Hummer. “They might not even be in a situation where they’re aware yet that they’ve received blood.”

The videos would allow a patient who has received blood to say thank you, Hummer says. She notes that often, those who receive blood don’t realize they have the option of meeting their blood donors.

The idea is to show donors the impact their donation can have, she says.

The organization is limited on what it can disclose to donors because of the Health Insurance Portability and Accountability Act regulations and privacy expectations, so the text’s themselves only reveal that a donor’s blood has been sent to a hospital, without any further details about which hospital.

Hummer says she’s unsure how many donors have signed up to receive alerts, but she did note that there’s been an increase in inquiries about the service.

Vitalant also is switching its donor management system, says Hummer, which she hopes will enable the organization to expand its outreach offerings.

Hummer says the organization has been experiencing a few hiccups with the program and is switching to a new management system which she says will provide the nonprofit with a better donor management system and communication with donors.

The new software also will allow Vitalant to personalize communication preferences, she says, and will allow for donors to choose if they want to be contacted via text, phone call, or email.

“It’ll allow us to communicate in a way that donors will actually appreciate and not feel like we’re bombarding them,” she says.

Ideally, the program will be implemented in early October. The text messaging feature will remain in the existing eDonor program, she notes, until the full capabilities of the new system can be explored, and all the data is transferred from the old program.

Blood donation organizations have been facing significant headwinds with donors, as more limitations are placed on younger donors’ ability to donate in the face of new research requiring more strident monitoring of iron levels and health safety, Hummer says.

In addition, older donors — who Hummer says make up the majority of the donor base — increasingly are reaching ages at which they’re more likely to be placed on medical deferral and be unable to donate anymore.

“When we have those older donors, who are no longer able to donate, it’s vital that we replenish that with younger donors,” says Hummer. “Right now, we’re not really seeing that replenishment.”

Hummer attributes the decline to the anonymity of donating blood in a generation — particularly millennials — that wants to be able to see their impact.

She says, “It’s not likely that you might know who that blood goes to, and while we try to thank people, it’s still an hour in a chair with a needle in your arm.”

She clarifies that each appointment takes an hour in total, while the actual blood draw takes about 10 minutes, and a person can donate one unit of whole blood every 56 days.

The organization also is competing with research organizations that pay for blood or plasma donations, she says. People are more willing to sit with a needle in their arm if they’re getting paid to do it.

“Because donations at Vitalant are meant for person-to-person transfusions … we cannot financially compensate donors,” she says.

The goal is to draw in more donors in the summer months, when donor rates drop significantly, because more people are out and about, she says. With more people being active, she says, the need for blood during the same months increases as well.

For the month of July, the nonprofit needs to gather just over 3,500 units of blood, or have about 200 donations a day, Hummer says. Only about 38% of the population is eligible to donate blood, she says.

The organization works with hospitals to cycle products, meaning if a hospital is less likely to use blood before it expires, it gets sent to another hospital that is more likely to need it.