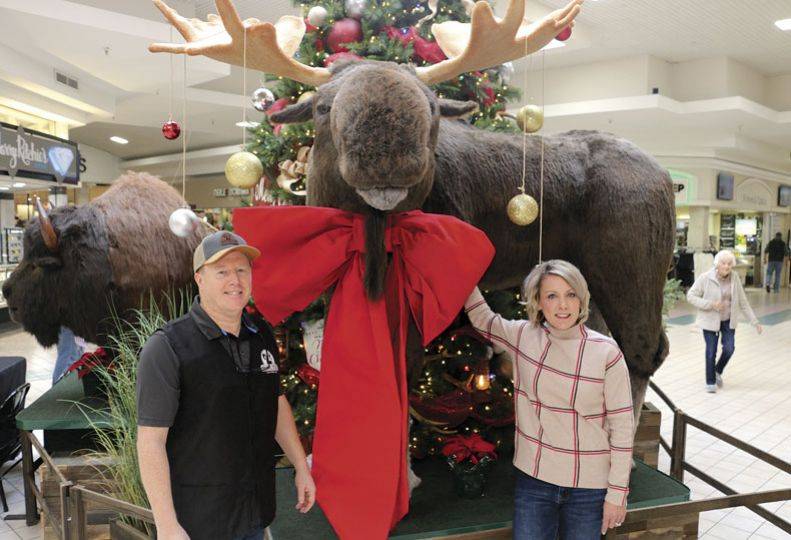 The mall is full, in part, thanks to Black Sheep Sporting Goods and 10 of its affiliates taking up about a third of the retail spaces there, so far, says Brian Knoll, head of operations for Black Sheep. Knoll is the son of the company’s owners, David and Barbara Knoll, who also own the mall.

The flagship Black Sheep store takes up 50,000 square feet of space in the mall, having moved in June into the site formerly occupied by a J.C. Penney & Co. store, from its original location at 3534 N. Government Way.

“We had all kinds of events, and it felt like a carnival in here,” Schock says.

While Knoll declines to disclose specific sales numbers, he says revenue is in an “upward trend” this year, with strong sales going into the Christmas season.

He acknowledges his parents made a bold move to buy a shopping mall during what was perceived to be a downturn in the brick-and-mortar retail marketplace, but he says Black Sheep, which already had opened two stores in the mall—Black Sheep Knives & Optics and Timberline Trading Co.—simply needed the space.

“Our inventory had grown to the point where we are having a difficult time properly displaying it in one retail store,” he says.

Knoll says part of Black Sheep’s strategy to stay relevant in the physical retail space is to provide customers with a selection of products that compares to the online marketplace.

“They call it the endless-aisle effect,” he says of selection available through online retailers like Amazon.

“Our goal in giving these top brands their own expanded space is to create a similar endless-aisle effect, where a customer can come down and not only touch and feel … but they’re also going to find a similar selection here in a physical environment,” he says.

Knoll says Black Sheep and its affiliates have about 100 employees. He adds, “I feel the mall has become an important employer in the community. The increase in sales brings increases in hiring.”

Vacant spaces in the mall have been filled recently with seasonal retailers including Hickory Farms LLC food and gift retailer and See’s Candies, and Knoll says he has more permanent vendors in line to fill those spaces in the spring, although he declines to disclose  them.

Aside from Black Sheep, the 323,700-square-foot shopping mall is anchored by Macy’s and JoAnn Fabrics & Crafts retail stores and currently has about 20 other tenants.

The mall, which opened in 1989, is still home to some longtime tenants, including Claire’s teen jewelry and fashion accessory store, and Bath & Body Works soap, candle, and fragrance retailer.

Although the Knolls decline to disclose the terms of the mall acquisition, the Kootenai County Assessor’s records showed the taxable value at the time of the transaction was $12 million. The mall’s taxable value for 2022 is $15.3 million.