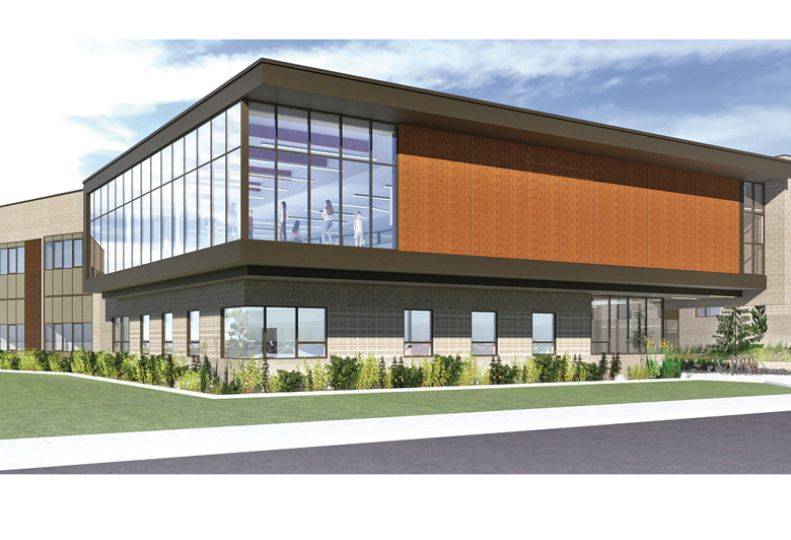 -—ALSC Architects PS
Central Valley School District plans to build a roughly $30 million, 85,800-square-foot Liberty Lake middle school, a conceptual design of which is shown above. The project is one of three major projects to be funded by a recent bond approval. 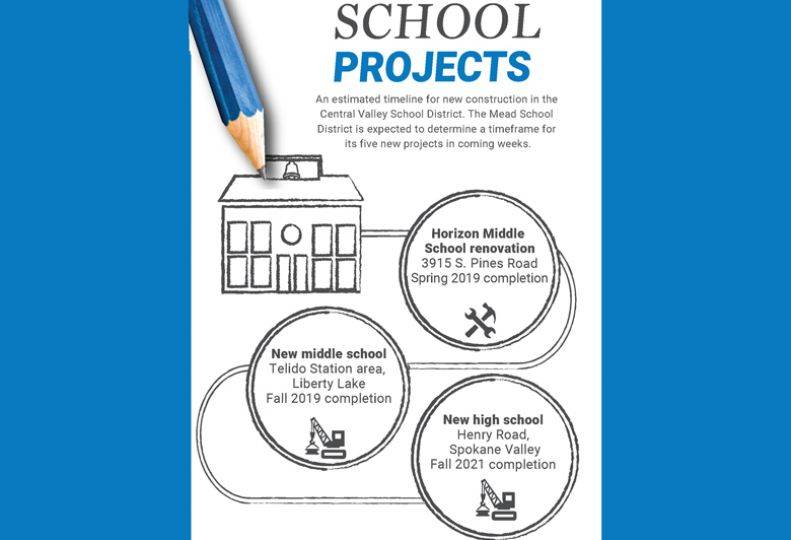 For the Central Valley School District, the $129.9 million bond approval will fund construction of a new high school and a new middle school. It also will finance the renovation of Horizon Middle School, and heating, ventilation, and air-conditioning system updates to Summit School and Broadway, Progress, and University elementary schools, says Ben Small, superintendent for the district.

Marla Nunberg, district spokeswoman, says the district doesn’t have a “true estimated cost of completion” broken down for the high school and some of the other projects due to the early stages of the process, but it does have preliminary estimates for projects.

Also, the district is still determining whether it will use the traditional design-bid-build construction process, or if it will use other, alternative delivery methods, says Nunberg.

The new, roughly $95 million high school is planned to be located on Henry Road, near the Saltese Uplands Conservation Area.

Small says the facility is projected to include about 240,000 square feet and have a student capacity of 1,600, he says.

“The capacity sets us up to meet the future needs of our students for the next 10 to 15 years, and we will continue to monitor our growth and enrollment and make adjustments as we need to,” he says.

Construction is expected to begin in summer 2019, and the high school is projected to open fall 2021. No architect or general contractor have been selected for the project, he says.

Small says a new, roughly $30 million, 85,800-square-foot middle school is planned to be constructed near the HUB Sports Center, in the Telido Station neighborhood in Liberty Lake. The school is expected to open in fall 2019. The facility will have a 600-student capacity.

Jay Rowell, deputy superintendent for Central Valley School District, says the district is issuing a call for bids for the project this week. ALSC Architects PS, of Spokane, is designing the project.

Nunberg says the school, which is located at 3915 S. Pines Road, will receive a new HVAC system, and other upgrades to meet current codes and safety standards. The project will increase student capacity by 120 students, to a total capacity of 600.

Small says other projects around the district will involve improving HVAC systems at a number of schools.

The school district is updating its capital facilities plan to accommodate population growth and improve the education environment, he says, adding that the district grows by roughly 250 to 300 students each year.

Ned Wendle, director of facilities and planning for the district, says the largest single project will be a $50.6 million new middle school, which is being planned on a plot of land the district owns on Five Mile Prairie, just west of Moss Lane, says Wendle.

Wendle says Mead School District’s general target capacity for middle schools is 750 to 800 kids, and he estimates—based on previous projects—that the school will be roughly 120,000 square feet.

A new $24.1 million elementary school is also in the works, Wendle says.

The school site hasn’t been selected yet, but the district is looking at a location between the Wandermere area and Market Street, he says.

The target capacity is about 600 students, and Wendle estimates the elementary school will have around 61,500 square feet of space.

An $11.1 million transportation co-op facility, $6.2 million of which will be funded by the bond, is being planned, says Wendle.

The facility will be on a 5.3-acre parcel of land the district owns between north Market Street and north Myrtle Street, just south of a current district warehouse. The site is across the street from the old Mead Middle School, at 12509 N. Market, a portion of which now is occupied by the Boys & Girls Clubs of Spokane County.

Wendle says the bus-repair and maintenance facility is a joint project with East Valley and West Valley school districts. The size of that facility has yet to be determined.

The bond will fund a new football stadium, which is budgeted at $22 million. The stadium, which likely will be located on a portion of the old Mead Middle School site, is projected to have a seating capacity of 4,500, Wendle says.

Both Mt. Spokane High School and Mead High School football teams will play their home games there. The schools’ color guards and marching bands also will use the venue for practice, he says.

The stadium is envisioned as the first phase of an athletic complex that could include additional amenities, such as baseball and softball fields, that would be part of future bond proposals, he says.

Other smaller Mead district projects to be funded through the bond include installing new carpet for Colbert Elementary School, Mead High School, and Mt. Spokane High School; purchasing land for future school sites; and installing a new wood gym floor at Meadow Ridge Elementary School, says Wendle. Several of those smaller projects could be built during the aforementioned timeline.

Both Mead and Central Valley school districts have projects underway that are funded by bond measures voters approved in 2015, as previously reported in the Journal.

Mead voters approved a $69.5 million bond that, when coupled with a state match, totals up close to $102 million in construction projects.

Nunberg says CVSD’s 2015 bond-funded projects currently under construction include the 85,800-square-foot new North Pines Middle School, at 701 N. Pines. The school has a planned enrollment of 600 students, and estimated construction cost is $29.9 million. Construction started nearly a year ago and is expected to be completed in August. ALSC Architects is the project architect, and Garco Construction is the general contractor.

Construction is also underway on the $19 million, 58,000-square-foot Riverbend Elementary School, at 17720 E. Mission, in Spokane Valley, she says.

The school, which will have a student capacity of 540, is expected to be completed in July. MMEC Architecture & Interiors LLC is designing the project, and T.W. Clark Construction LLC, of Spokane Valley, is the general contractor.