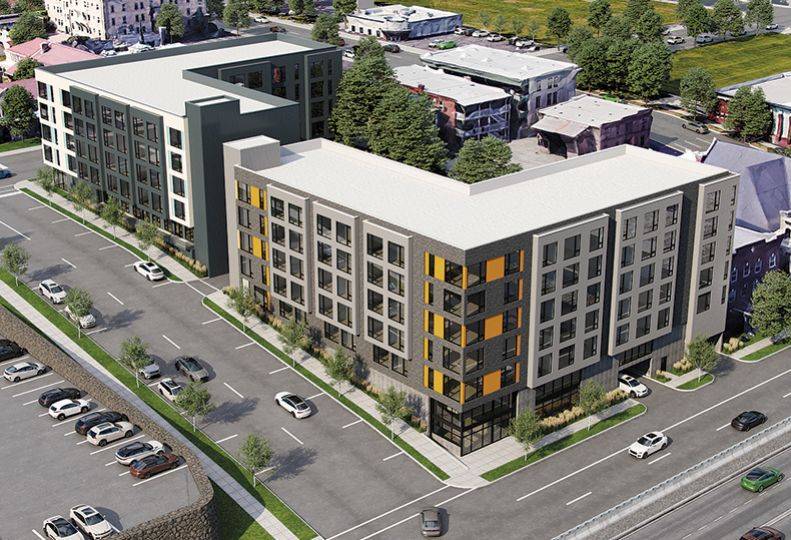 -—Koz Development LLC
The Koz on West 4th Avenue project will be constructed along Bernard Street between Fourth and Fifth avenues.

Koz on West 4th Avenue will be located on three lots at 307 W. Fourth, and 310 and 308 W. Fifth, on about an acre of land on the west side of Bernard Street, on the lower South Hill.

The site formerly was occupied by the Westminster Cowley Youth Memorial Building, which was demolished in 2011, permit information shows.

Scott, who also is vice president of design and construction, says original plans for the development proposed 262 units in two five-story to six-story buildings and about 172,000 square feet of total building area.

The number of apartments likely will be scaled back, however, to about 200 units due to rising construction costs, Scott explains.

“We’ve been working through some budget issues just to figure out what our ultimate unit mix is going to be,” he says.

Studio units with an average size of 300 to 350 square feet will take up about 70% of the 200 units. One-bedroom and two-bedroom units will make up the remaining 30%, says Scott.

He adds that the rental units will be affordably priced but won’t be subsidized.

“We tend to hold our rents down mostly due to the size of the units,” Scott says. “One of our business strategies is to produce a little smaller-than-usual apartments as a means of controlling the rent.”

Scott says Bouten Construction Co., of Spokane, recently has been selected as the general contractor for the project.

“We’re working with (Bouten) right now on pricing of our early schemes and that’s what’s led to some design changes from the pre-application conference.”

Koz Development is designing the project and will provide property management services once the development is completed.

The development could break ground in early 2023 if all goes to plan, Scott says. The goal is to have units available by the start of the 2024 school year.

Scott says the project will be constructed to meet Built Green four-star standards, making the proposed apartments energy-efficient, similar to the LEED Gold standard of construction.

The four-star certification requires a 20% energy use improvement above current Washington state energy codes, according to Built Green’s website.

A mixture of surface and structured parking will be located on site, he says.

Site plans show the structured parking will have an automated mechanical, stacked parking configuration, which would allow three cars to be parked within the same floor-area footprint—an upper level, a lower level, and an entrance level—which can be shifted with a touch of a button to allow access to vehicles.

A large courtyard for residents is another planned amenity for the property.

Scott says the price point should appeal to medical professionals and students, who Scott says are the targeted markets for the property.

“We were attracted to that location because of its proximity to the medical district,” Scott says. “There’s lots of opportunities for traveling nurses and other workers, and it’s very close to downtown and close to the universities. It really is workforce housing for people who want to live on their own but don’t necessarily need everything offered in some of the more appointed apartments.”

Rent will include utilities and internet so that a resident without an established account with local utility companies won’t have to set up any accounts or put down deposits, Scott asserts.

“We’ve always thought it would be a great option for somebody who’s looking at no longer having a roommate in their first apartment. In a lot of cases, in the areas we build, people get to affordability because they live with multiple people. But if they’re willing to live somewhere a little smaller, then they can save some money on rent.”

Scott declines to disclose an estimated development cost, as design details are being reworked due to budget issues. The company has started looking for lenders, although financing for the project has not been fully secured yet, he says.

The company has previously completed apartment developments in Salem and Portland, Oregon, and the Washington cities of Everett, Snohomish, Tacoma, and Seattle, according to its website.

“We’ve been in Washington for a few years, and I think that with the super low vacancy, and the amount that rents are … it suddenly makes economic sense for us,” Scott says. “It took a while, but Spokane is really in need of some housing, and it’s a good opportunity for a product like ours.”