Pullman facility expected to be completed in 2021 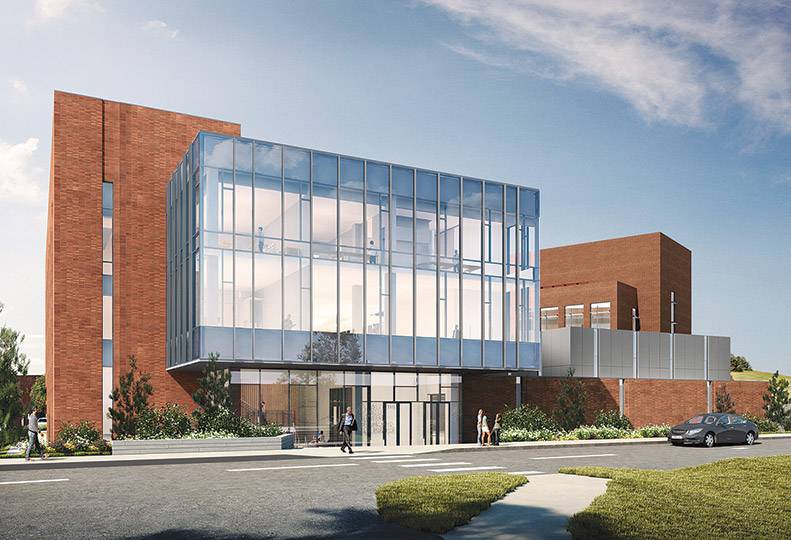 -—Perkins+Will
The new Washington Animal Disease Diagnostic Laboratory will be in a wing of the Global Animal Health center, in Pullman, Wash.

The College of Veterinary Medicine at Washington State University, in Pullman, has started construction of a $61.9 million facility that will be occupied by the college’s Washington Animal Disease Diagnostic Laboratory. The laboratory will be located in a 62,000-square-foot new wing of the Paul G. Allen Center for Global Animal Health, says Charlie Powell, spokesman for the college.

Bouten Construction Co., of Spokane, is the contractor on the new wing, and the Seattle office of Perkins+Will designed the project.

“It is not an efficient system to walk potentially dangerous samples through the building over to another building, where our Biosafety Level 3 laboratory is,” Powell says.

A biosafety level is a set of precautions required to isolate dangerous biological agents in an enclosed laboratory facility. Level 3 is the second-highest level, and requires precautions such as conducting procedures with infectious materials in an enclosed and ventilated workspace.

The laboratory processes samples and deceased animals. In 2014, for example, WADDL detected the first case of bird flu in the country, and, earlier this summer, the laboratory conducted a necropsy on a cougar that was believed to have attacked cyclists near Snoqualmie, Wash.

WADDL’s posted mission statement is to “provide appropriate, timely results to safeguard the health of livestock, pets, poultry, and fish in the Pacific Northwest and to protect the public from zoonotic diseases.”

Zoonotic diseases are animal diseases that can infect humans.

About 84 people are employed at WADDL, Powell says, and about 160 students use the laboratory.

The wing is expected to be completed in early 2021. The project received $23 million in state funding during the 2018 legislative session, and WSU plans to ask for an additional $36.4 million from the 2019 Legislature.

WSU provided funding for $1.9 million in predesign and design work.

Andrew Clinch, associate principal at Perkins+Will, says he set out to design a facility that’s distinct from the other colleges but blends well with other structures on the campus.

“It’s a juxtaposition between creating their own front door and identity but still connecting with what was established at phase one, and then the greater campus, the vocabulary of the brick and glass on campus,” Clinch says.

Understanding how the laboratory processes samples was the biggest challenge in creating a design that enhances efficiency, Clinch says.

“They may be as small as a small cell, or they may be as large as a diseased large animal,” he says. “It’s really just about containment, flow of the sample, and understanding how WADDL runs its facility.”

Samples will initially come through the necropsy lab for processing, Clinch says, before going upstairs to specialized laboratories on the second and third floors. The laboratory spaces will be surrounded by offices and conference spaces, Clinch says.

WADDL is the only Level 1 animal disease diagnostic laboratory in the Pacific Northwest, Powell says, and conducts about a quarter of a million tests each year. A Level 1 laboratory, according to the U.S. Department of Agriculture, has the capacity to test large volumes of samples that come from animals farmed for food, as well as conduct surveillance testing and maintain Biosafety Level 3 laboratory space.

There are 15 Level 1 facilities in the U.S. Department of Agriculture’s National Animal Health Laboratory Network.