$290 million-plus in public projects to start this year

Bridges, water expected to drive projects despite potential I-976 disruption 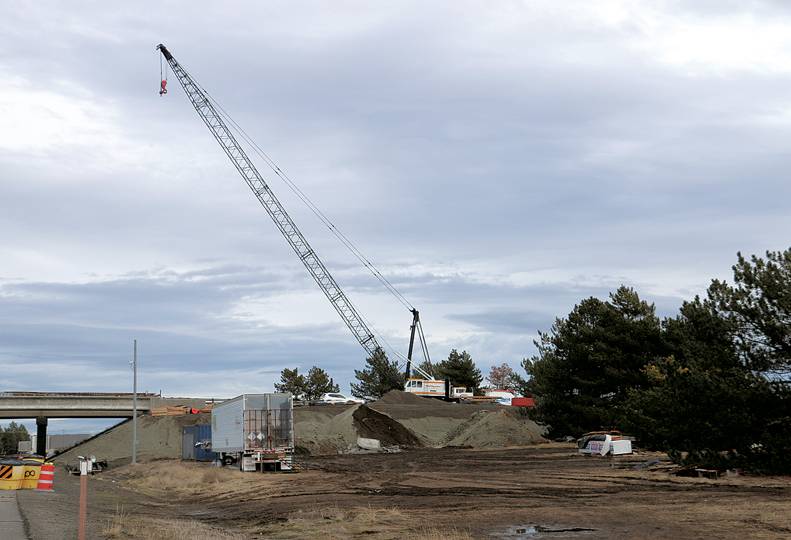 -Natasha Nellis
The $15.9 million Medical Lake interchange project is among a number of current state projects that aren’t expected to be tied up by the passage of—and court fight over—Initiative 976.

Even though the passage of Initiative 976 and its subsequent court challenge have left some public projects up in the air, 2020 is expected to be another strong year of public work, with more than $290 million in activity expected to begin this year, transportation officials here say.

I-976 is a voter-approved initiative passed in November to limit annual license fees to $30, repeal local Transportation Benefit District fees, and limit certain taxes and fees related to transportation project funding. The state budget office estimated that I-976 would result in a revenue loss of $4 billion to state and local governments over the next six years, and the repeal of TBD fees eliminates a source of funding for local street maintenance.

On Nov. 26, King County Superior Court Judge Marshall Ferguson blocked the initiative from taking effect. The state Supreme Court ruled in early December the measure will remain on hold until the pending legal case is resolved.

In the city of Spokane, water, bridge, and road projects dominate the list of projects planned this year, which brings a total projected budget of $75 million in public projects for the year.

Work on the Post Street Bridge hoists the biggest price tag, valued at about $24 million of the estimated $35 million total for all bridge and street projects, city spokeswoman Marlene Feist says.

Construction on the Post Street Bridge is scheduled to begin upon the completion of the final CSO tank, which Feist says should happen this summer.

Other bridge projects include deck replacements of the Don Kardong Pedestrian Bridge on the Centennial Trail by Gonzaga University and Hatch Road Bridge just south of Spokane off U.S. 195, and replacing the north suspension bridge at Riverfront Park. Altogether, those projects carry a price tag of about $5.3 million.

In streets, the city is planning a $3.1 million safety project on Hamilton Street from Desmet Avenue to North Foothills Drive. The work will include upgrading traffic signals and installing left turn lanes. Construction is expected to begin this summer and wrap up in the fall.

The city will continue its water system work, Feist says, with a $9.4 million, 3.6-million-gallon storage tank at the Spokane International Airport and a new well near Havana Street and Fifth Avenue.

Work on the airport storage tank is expected to begin in spring and wrap up in fall 2021.

Feist says a lot of well drilling and pump station work will be done this year.

The city also anticipates completing the $62.2 million North Bank reconstruction, with work scheduled to start on the West Havermale Playground this year, and the Washington Street and North River Drive intersection improvements wrapping up the multi-year endeavor. On that front, work valued at $6.4 million is slated to occur.

Feist says most of the projects will be sent out to bid in the first quarter of the year, with work expected to begin in the spring.

Any projects funded through the city’s Transportation Benefit District likely will be placed on hold and delayed at least a year because of the passage of Initiative 976 and pending court and legislative response to the measure.

Several of the Washington state Department of Transportation projects slated to begin this year have been deferred for at least six months, says Spokane-based spokeswoman Beth Bousley.

The department originally had at least $177.5 million in projects either currently underway or expected to begin in 2020. As of the Journal’s press time, at least $45.3 million of that has been deferred, also because of voter approval of I-976, which is being challenged in court.

Projects that are expected to move forward this year are continuing work on the $15.9 million Interstate 90-Medical Lake interchange improvements that started in June 2019 and is expected to be completed in late fall 2020; $9.7 million in repaving work on I-90 from Sprague Avenue to Argonne Road; the replacement of the East Trent Bridge and resurfacing of Trent Avenue, valued at $23.5 million; and continuing work on the $77.5 million BNSF Railway Co. track realignment project.

In Spokane County, currently deferred projects include the $29.5 million Harvard Road and bridge widening and Barker Road roundabout that had been set to start in early summer; work on the $15.9 million I-90 Geiger Road interchange that was expected to begin in early summer; and the shared use paths on US 395-North Spokane Corridor from the Spokane River to Columbia Avenue.

Those deferred projects had been scheduled to go out for bid within six months, Bousley says.

“They’re just on the deferral list, what it means is all of those projects have been postponed to give the governor and the Legislature as much flexibility as possible on how to handle the (potential revenue) shortfall,” Bousley says. “The trick is the list is changing all the time.”

I-976, if upheld, could cut an estimated $4 billion in previously anticipated transportation funding over the next six years.

Spokane County currently has $29.4 million in projects slated to begin this year, according to its 2020 budget.

Part six of the ongoing Bigelow Gulch expansion is expected to begin this year, which will include the $7.6 million reconstruction of the road into five lanes from Forker Road to Wellesley Avenue.

In Spokane Valley, the city has over $46 million in public projects slated for this year.

Work is expected to begin on the BNSF grade separation at Barker Road, which has an estimated construction cost of $25 million. Spokane Valley spokesman Jeff Kleingartner says the project could be delayed until Spring 2021 as right of way acquisitions are needed before the city can move forward.

Barker Road also will continue to be widened this year from the river to Euclid Avenue, a $4.5 million project. Its start date also is dependent on remaining right of way acquisitions, Kleingartner says. The city reconstructed Barker Road from Euclid to where it intersects the BNSF railroad line during the summer and fall of 2019.

Appleway Trail, a pedestrian and bike trail in the city, will be extended again this year, Kleingartner says, with the $2.5 million construction project from Evergreen to Sullivan roads that is already underway.

Other Valley projects include a $600,000 intersection improvement project at Pines Road and Mission Avenue, the $2 million widening of Garland Avenue from Flora to Barker roads, and the $3.1 million preservation project on Indiana Avenue between Evergreen and Sullivan.