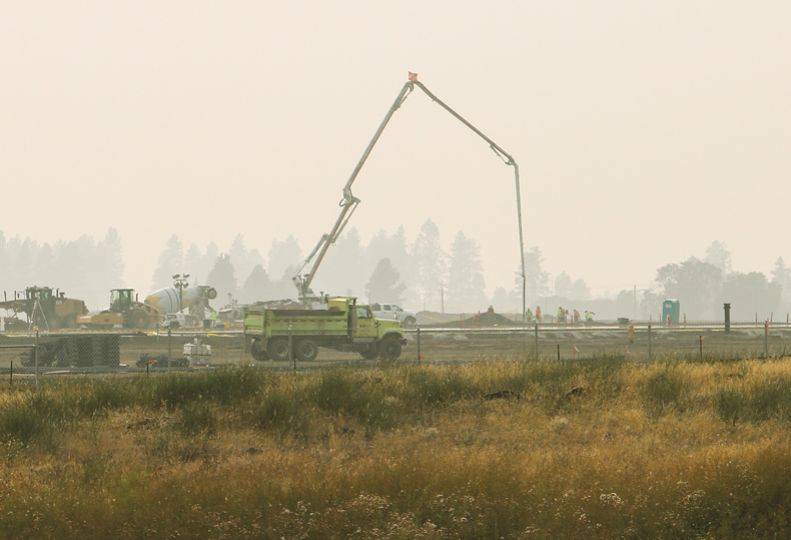 -—LeAnn Bjerken
Construction crews prepare the West Plains site for the 2.6 million-square-foot Amazon.com Fulfillment Center, which is to open in August 2019.

Last month marked the start of construction on what will eventually become a new Amazon Fulfillment Center on the West Plains.

The Journal previously reported that the $181 million facility, being built at 10010 W. Geiger Blvd., just southwest of Spokane International Airport, is expected to employ more than 1,500 people upon its completion in August 2019.

In the meantime, however, just the process of building the 2.6 million-square-foot, four-story, robotic fulfillment center is already having an effect on the construction industry here.

Amazon spokesman Lauren Lynch says the process of building the massive facility is expected to require hundreds of construction workers.

“Counting everyone under contract with our general contractor as well as other local project partners, we estimate that all told, the project will bring in more than 700 construction-related jobs,” says Lynch.

Lynch was unable to confirm just how many local contractors are currently working at the site, but did say that on average, similarly-sized fulfillment center projects bring in more than 400 construction and technical jobs before the building opens.

“The only remaining question is whether Amazon will be able to find the laborers they need locally,” he says. “Obviously, we’d like to see them hire local contractors, but even if they have to pull in some from outside the area, that will still bring more laborers to the area who will contribute to the local economy.”

“It’s a big project that’s going to suck up a lot of resources over the next year, especially once they start the concrete flooring,” says Stewart. “There’s already a worker shortage, so it will be a challenge, but it’s one I think we can handle.”

“There are many pieces to this that haven’t been awarded yet, but there’s definitely a lot of interest,” she says.

Stewart says AGC already is seeing contractors bringing in workers from outside of Spokane to help with the added staffing needed.

“It hasn’t gotten too bad yet, as most contractors already needed more workers,” she says. “Everyone is learning how to be more efficient, and perhaps being more careful in which projects they bid on going forward. I think most contractors here were aware that this large project was on the horizon and tried to plan accordingly.”

Stewart says that as the project gets underway, local contractors continue to seek new laborers to handle the workload, and workers who have been added will likely be able to stick around even after the fulfillment center’s completion.

“Once this facility is completed, that will be around the time when projects for the North South Corridor will start coming in, which I think will absorb a lot of that extra workforce,” she says. “There’s also another school bond coming up, so I think there will be plenty of jobs in the foreseeable future for anyone in construction.”

Stewart says the potential strain of such a project on local resources is also a concern.

“We were somewhat concerned initially about materials or supply issues with this project, but we haven’t heard of any yet,” she says. “However, it might be interesting to see how it may effect plans for new projects going forward.”

So far, he says, the company has installed sewer mains and plans to install off-site sewer lines before winter.

Piersol also has installed about 18,000 feet of water main, excavated 41,000 yards of footing excavation so far, and prepared about 180,000  square feet of space for the building’s concrete floor.

“We still have a way to go, but we’re moving as fast as we can,” he says. “Compared to the size and schedule of a standard commercial project, this is gigantic.”

He adds, “It’s not for the faint of heart. We’re putting in over 60-hour work weeks.”

Piersol says since his company was awarded the project, the biggest impact has been the demand for manpower.

“We’ve hired an additional 16 employees to help manage the workload. Most of them have just moved to the area or were working for other out-of-town companies,” he says. “Initially, we had about 44 staff, and now we’re pushing 60, and the jobs will continue through Christmas, maybe even longer.”

He says another impact of taking on the fulfillment center project is that the company isn’t as available for other local projects.

“The Amazon project demands so much manpower that we’re short in fulfilling our needs elsewhere,” he says. “I’ve had to turn away a considerable amount of work because I can’t fit it in, so it is squeezing out some of our regular work.”

Jamie Welsh, Garco Construction’s project manager for the Amazon project, confirmed the company is currently working to create the structural concrete footings and foundations at the fulfillment center site.

“We did have to increase the size of our crew for this project,” says Welsh. “At last count, we had about 59 people on the project, not including subcontractors.”

Welsh was unable to disclose any more information about Garco Construction’s current work on the project, referring additional questions to Kevin Sharves, project executive for Layton Construction. Sharves could not be reached for comment.

While the real estate price information wasn’t immediately available, the assessor’s office recently listed the taxable value of the newly combined parcel at $3.3 million, roughly three times the taxable value the land had been assessed at collectively last year.

In addition to its effect on local contractors and construction crews, the building of the fulfillment center has sped up nearby transportation projects.

Last month, the Journal reported on several transportation projects in the works by both the Washington state Department of Transportation and Spokane Transit Authority that were being revised in order to accommodate the fulfillment center project.

These projects included changes to the scope and order of WSDOT’s planned improvements to the Interstate 90-state Route 902 Medical Lake interchange and the I-90-Geiger Field interchange, and, by extension, Spokane Transit Authority’s timeline for construction of the West Plains Transit Center.

Mark Allen, project engineer with the Washington state Department of Transportation, now says another project has been added to plans for the Interstate 90- Medical Lake interchange.

“As part of the roundabouts interchange project construction next summer, we’ll be putting in a shared-use path that would connect STA’s Park and Ride facility south of the freeway, to a spot along just west of Hayford road on the north side of I-90.”

He adds, “The traffic expected to be generated by Amazon’s facility in that area is expected to be large, so we also wanted to design a shared path that wouldn’t cross all of that heavy movement.”

Allen says plans to continue the pathway further east toward the fulfillment center are being considered by the county.

“Our shared-use path ends just before Hayford Road, but the county is working on securing funding to extend the path to the Geiger Interchange,” he says.

Allen says he doesn’t know of any other upcoming transportation projects that likely will be affected by construction of the new facility, though he does admit there are rumors of potential upcoming supply shortages within the industry.

“There’s been some talk of possible material shortages during next summer’s construction season,” he says. “From what I’ve heard, some local contractors are concerned about concrete, because a facility that size will use up a lot of our local supply. That could make finding supplies for other projects difficult, but we’ll just have to wait and see.”

Besides the construction and technical jobs generated by building the facility, the new fulfillment center is expected to employ roughly 1,500 workers upon completion.

Amazon’s Lynch has stated previously that the company expects to open the fulfillment center before the 2019 holiday season, with hiring of staff to start several weeks prior and continue after the facility opens.

As construction of the facility ramps up, job seekers are also starting to get excited, a fact that apparently hasn’t gone unnoticed by employment scammers.

Tyler Russell, Spokane-based marketplace manager for the Better Business Bureau, says a there’s a new employment scam that appears to be targeting people who are eager to work for the retail giant.

“Amazon has been top of mind for a lot of people in recent months, especially with the official announcement of this new fulfillment center,” he says. “With that has come added interest from scammers, who’ve developed a new scam that targets people who’re interested in working for Amazon.”

Russell says the scam works by leaving the victim a voicemail inviting them to apply online for a job at Amazon.

Scammers use that information to ask for additional cash for an “enrollment kit.” Once the victim has paid up, the scammer will vanish with the money, and the new job never materializes.

“It’s a new variation on an old scam, but it’s still easy to fall for,” he says. “That’s why we’re encouraging people to double check company websites and be cautious of jobs asking for money or personal information.”