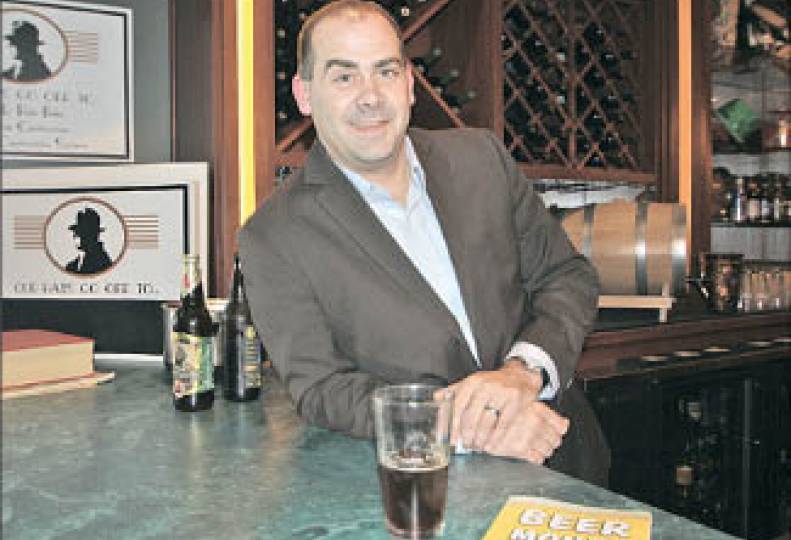 Darin Hayes, a Coeur d'Alene-based D.A. Davidson & Co. financial consultant, has had more than a few informal conversations over beers with friends about basic concepts of personal finance and investing.

A fan of specialty brews, Hayes says he started thinking about ways to explain complex financial concepts by relating them to a topic that many adults enjoy and understand—beer. He since has put those ideas into a book he wrote in his spare time and published in early October called, "Beer Money: A Beer Drinker's Guide to Personal Finance and Investing."

The book, which is available through Amazon.com, costs $9.95 in print and $4.95 for an e-book version. Hayes says the goal of the self-published book is to offer an easy-to-read guide on personal finance and investing, so that even someone without any exposure to the concepts can understand them.

He adds, "If anyone understands anything about beer, this book helps them understand how the market works, how to save, how to begin financial investing."

Because the book is fairly new, Hayes says he hasn't yet had a chance to market it in earnest. He recently formed the company Beer Money LLC to market and sell the book, which has had about a dozen sales so far.

Hayes' book starts with a pub crawl analogy and map, also the framework for chapters, to guide readers. It starts with personal income, encourages budgeting and retirement plan savings, describes investment vehicles in laymen's terms, and ends with retirement, or "Tapping Your Keg."

As another example, Hayes in the book compares the concept of free beer, as in buying one and getting one free, to "free money" when an employer offers to match an employee's contribution in a company-sponsored 401(k) retirement plan. Employees need to ask whether a plan offers an employer-matched contribution, and to start deferring a maximum amount from every paycheck, Hayes says.

He adds, "It takes four things to make beer—water, hops, barley, and yeast. How do you build wealth? With four things—time, principal or investment capital, a rate of return, and sometimes an iron stomach not to let emotions guide your decisions."

Hayes contends that a majority of financial and money management books use complex language, while few offer a bridge using laymen's terms and analogies to help readers understand difficult concepts, such as how mutual funds work.

"Most books on personal finance and investing are 300 to 700 pages long, and for most people, reading them makes their eyes roll back in their heads," he says. "That's what happens when people don't understand the basics."

"There's a language to money, and most books out there are already using that language, but if you don't even know what a stock is, that book won't help you," Hayes says. "For a lot of people, managing their personal finances is not a process they enjoy. If they say, 'Oh my God, beer,' and this particular angle encourages people to manage their money, that is the goal."

He adds, "To read the book won't take much time, about the same amount of time it takes to drink a six pack."

Hayes has worked eight years for the Great Falls, Mont.-based D.A. Davidson & Co.'s Coeur d'Alene office, which is located at 608 Northwest Blvd. He also serves as the 2011-2012 board chairman of the Coeur d'Alene Chamber of Commerce, through the end of November.

Some inspiration for the book came from a monthly beer tasting and investment news forum he hosted a few years ago, called, "Beers, Bulls & Bears," at Daanen's Delicatessen in Hayden, Idaho. He doesn't offer the talks currently, but that is where some of his ideas started fermenting, he says.

Hayes says he also has drawn inspiration from his work with Bradley Dugdale Jr., another D.A. Davidson financial consultant, regarding the importance of general financial education. Dugdale has written two personal finance books, "Let's Save America, 9 Lessons to Financial Success," and "Munny Journey, a Keepsake Journal for Baby's First Money."

Dugdale and Hayes work as partners to manage more than $250 million in assets at D.A. Davidson. While the two of them manage money primarily for individual investors, they also do some 401(k) consulting work for company-sponsored retirement plans.

Hayes says that while compiling his book, he'd talk to people casually about personal finance while out in the community, and found that many people aren't aware of basic concepts such as why they should participate early in a 401(k) plan.

"All of those things contributed to the book, and it started brewing, if you will," he says.

Hayes says it took him about three years to complete the book during his spare time from his Coeur d'Alene home. He is married, and he and his wife, Monique Hayes, have one daughter. Before starting a career in finance, Hayes worked from 1992 to 1997 as a copywriter for advertising.

This is his first book, though. Hayes says that he and Dugdale believe in financial education mainly because people need to understand how to navigate their options for retirement savings.

Hayes adds, "So many people don't understand the basics of money and personal finance. There's been a transition in the past two decades in our country to where your retirement is completely up to you. They're used to be these things called pensions."

However, since the early 1980s, the number of U.S. residents with pensions and a nest egg of personal savings by retirement age has dwindled drastically, Hayes says. He adds that people need to allow time to build savings, ideally beginning in their 20s and 30s, but they also need to devote time to understanding what they're building.

A chapter about bonds, for example, includes basic financial definitions along with a few beer analogies to wash them down, such as relating a bond's coupon or interest rate to the percentage of alcohol in a beer. Other chapters are devoted similarly to stocks, commodities, real estate, mutual funds, and retirement accounts.

However, Hayes says he has written the book such that he encourages readers to get their financial houses in order before they ever become individual investors who build portfolios with stocks, mutual funds, and bonds.

"If you have successfully budgeted to spend less than you earn, built decent emergency funds, and gotten rid of bad debt, then and only then, do you have the proper footing to belly up to the investment bar," the book says in Chapter 11.

He says the book's outline is structured in a way to help readers understand the rules of building a sound financial foundation.

"There are rules to personal finance and investment," he says. "If you follow those rules, you'll be OK, but if you try to skip steps, you run the risk of a very costly mistake."