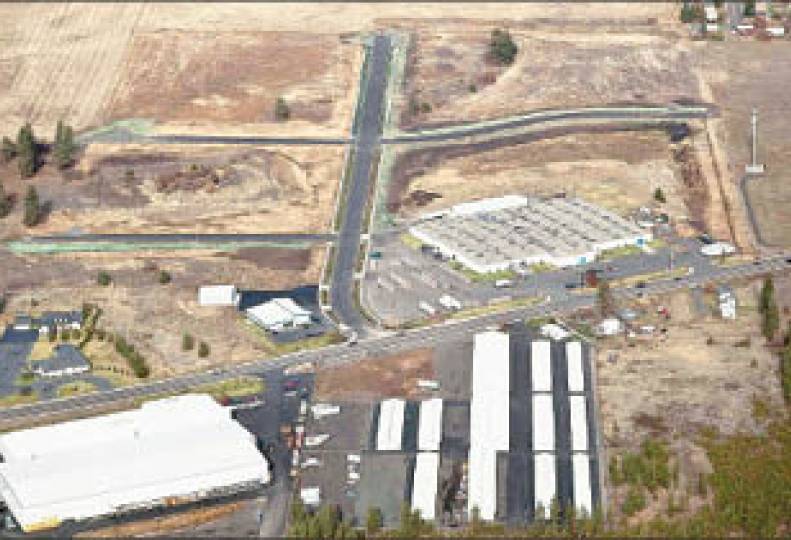 -—Photo courtesy of City of Cheney
The Cheney Industrial & Commerce Park is situated on 38 acres at the southwest corner of the city. Twenty-six parcels platted in the first phase are up to 2 acres in size.

The 38-acre Cheney Industrial & Commerce Park has gained a third-party certification that it is development ready, with roads, utilities, and other infrastructure in place for businesses that want to locate facilities there.

With the recent designation, city leaders are seeking to recruit businesses such as high-tech or aerospace manufacturers that will bring new jobs to the West Plains, says Brian Jennings, city of Cheney community development director.

The city co-owns the park with privately-held AE Cheney Land LLC, which is an affiliate of packaging maker Allpak Container East LLC, the only current business located in the commerce center. In recent years, the city and the manufacturer have worked under a public-private partnership to develop the park.

Allpak, part of a Seattle-area company that does business as AllpakTrojan, bought the 115,000-square-foot former Honeywell Electronic Materials plant and surrounding acres in late 2006. Two years later, the city purchased about half of the land for the park.

The site is located at the southwest corner of the city and on the north side of state Route 904, or First Street, near its intersection with Mullinix Road. Jennings says the park has 26 parcels platted in a first phase, ranging in size from one-half acre to 2 acres, with more to be determined in a second phase. In addition to the construction of infrastructure, environmental and other regulatory requirements are complete, he says.

The city oversaw the infrastructure work completed in 2010 and totaling about $3.8 million, a major portion of which was funded through a U.S. Economic Development Administration grant, Jennings says. The work included the installation of streets, curbing, landscaping, sidewalks, and sewer, water, electrical, and fiber-optic services.

"The intent of the grant is that this creates jobs," Jennings adds. "It couldn't be strictly for warehousing or storage units. We're trying to align ourselves with some of the initiatives that GSI (Greater Spokane Incorporated) is pursuing. The aerospace initiative is certainly a big one."

The industrial and commerce park is located 16 miles from Spokane International Airport. Jennings says the park could attract tenants interested either in buying parcels or in leasing structures that would be built to suit their needs.

Parcels could be combined, he says, adding, "Certainly, it could be anyone from a small business to a large business, potentially manufacturing and light industrial, or office use."

Currently, Allpak is among the city's largest private-sector employers, along with air-handling equipment company Haakon Industries Inc., and electronics manufacturer AMX, which both have facilities near the Cheney Industrial & Commerce Park.

Jennings says the city is working with GSI and taking deliberate steps to draw new industry to the park.