Cutter saw credit unions grow, expects them to get bigger

Retiring Numerica exec predicts a 'handful' of mergers in Washington 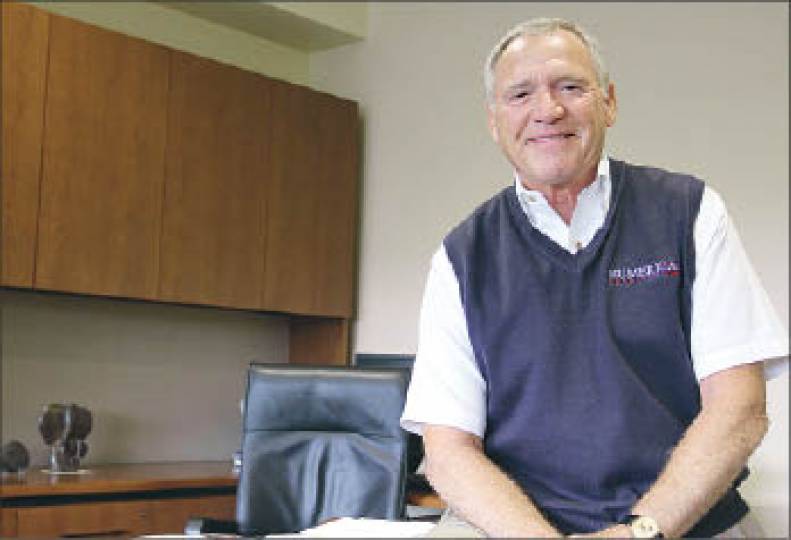 -—Staff photo by Treva Lind
Retiring Numerica Credit Union President and CEO Dennis Cutter has led the financial institution for the past 40 years. He will retire Aug. 31.

Numerica Credit Union's retiring executive Dennis Cutter has watched the industry do a lot of growing up during the past 40 years. Now, he expects some credit unions to continue getting bigger through mergers.

Cutter predicts that merger activity will be driven not so much because credit unions are struggling, but rather based on economies of scale.

"The state of Washington will see more mergers, probably a handful," Cutter says. "I think nationally there will be quite a bit more—some because of necessity and because maybe one isn't in good shape, but mergers also for efficiencies," such as when a larger credit union can afford to provide more services to members than a smaller one can, Cutter adds.

Cutter is leaving Aug. 31 after 40 years as president and CEO of the Spokane-based credit union that has 300 employees and 17 branches in Central and Eastern Washington and North Idaho. When Cutter took over the then-named Spokane Railway Credit Union in 1971, it had 3,000 members with $2 million in assets. It was renamed Numerica in 2000, and the credit union today has about 90,000 members and more than $1 billion in assets.

Numerica has been involved in its share of merger activity through the years.

Also, while at the helm of Numerica, Cutter worked to consolidate and streamline the credit union's administrative support offices that previously were scattered in separate locations. Numerica paid $6.9 million in 2006 to buy the former Safeco Insurance Corp. building at 14610 E. Sprague in Spokane Valley and $12.6 million to renovate it, before opening a headquarters there in 2008. The building now is named after Cutter.

By consolidating administrative offices, Numerica was able to cut operating costs by as much as $100,000 per month, says company spokeswoman Kelli Hawkins.

"Currently we have about 7,800 nationally," says Cutter, who from 1982 to 1996 represented a nine-state region on the Credit Union National Association's executive committee. He adds that the number of credit unions started shrinking in the 1980s, mainly as they lost their large industry sponsorships or joined with others.

The journey toward present-day Numerica started in the early 1980s when the regional railroad companies began employee cutbacks, Cutter says. In response, the credit union sought regulatory permission to broaden its membership to teamsters, then to all who shipped goods by rail or truck.

"The joke in the industry was, anyone who crossed a railroad track could join," Cutter says. By 1995, Numerica opened membership to the general public under a community charter in the state of Washington and the five North Idaho counties.

Cutter says another major shift for credit unions happened when the institutions were allowed to add the equivalent of checking accounts, called share draft accounts, in the late 1970s.

"Before that, members mainly would secure a loan and make deposits into a savings account," he says. "When we added checking accounts, that gave us the opportunity to promote the credit union as a more convenient source of financial services for our members."

Over the years, Cutter says, banks and credit unions became more departmentalized, in part because of the growing number of financial services offered and also in light of regulations and legislative changes. Early in his career, he says, he often wore many hats in addition to being CEO, stepping in as a teller, accountant or lending officer.

"When I started, there were eight employees, so I would help do everything if someone needed help," he recalls. "As you get larger and have more services, it just isn't possible anymore."

Although he says tighter federal regulations aren't surprising after the financial crisis and bank bailouts, he also sees how regulations impact a financial institution's customer service. Many of those regulations equate to a larger pile of paperwork, he says.

"I'm not a big fan of federal regulations," he says. "It detracts from what we do best, which is providing the best service we can."

Previously when people came in for loans, he says the process took one conversation about customers' needs, documented on one piece of paper placed into a file.

"Now it's all electronic, and there's six pieces of papers, maybe 10," he says. "I think it confuses people, and they don't read them anyway."

He adds, "With what happened with the economy, certainly at the forefront of all that economic meltdown were financial institutions. Regulators are going to do what they can to make sure that doesn't happen again. Credit unions weren't really part of the problem. We didn't lend to people who didn't qualify."

Cutter has seen the impact of community lending as far away as the Philippines and South Africa. He has served as chairman of the Credit Union National Association world affairs committee and as chairman emeritus of the board of directors of the World Council of Credit Unions.

As part of this work, he helped with a project to strengthen the industry in the Philippines, where he says a typical credit union has the equivalent of about $100,000 in assets. The project introduced a lending program that enabled a group of 25 women to borrow money to start individual businesses. The women collectively made payments back to a credit union in the Philippines, Cutter says.

In his retirement, he says, he plans to spend time with family and travel around the U.S. He also says he is looking forward to time for golf, reading and relaxing.

"I am grateful to have had an amazing career working in the credit union movement," Cutter says. "I have enjoyed going to the office every day to work with my board, my staff, and with my members."