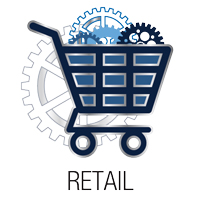 While many of 2020’s economic challenges due to COVID-19 will carry into next year, the most recent forecast for the state’s retail industry shows more promise than first expected.

At press time, the Washington state Department of Revenue’s most recently available retail sales figures covered the second quarter of 2020.

Spokane County’s taxable retail sales declined 6% in the second quarter this year compared with the year-earlier quarter, to $2.75 billion from $2.94 billion in Q2 2019.

Despite the expiration of most federal relief spending, retail trade activity in Washington was stronger than projected, resulting in revenue collections that were $256 million higher than originally predicted, the council reported in its findings.

Patrick Jones, executive director of Eastern Washington University’s Institute for Public Policy and Economic Analysis, says he doesn’t think 2021 is going to be a “bust.”

Historically, retail sales revenue is strongest in the third and fourth quarters in large part due to holiday spending.

He says a widespread distribution of a COVID-19 vaccine to the general public before the second half of next year could serve as a boost to the economy.

“I sadly think it’s going to be a tough first quarter and difficult for a lot of businesses to survive,” he says.

The arrival of the pandemic created “winners and losers” across all sectors, Jones says.

With interest rates at an all-time low, housing and the automotive industries were among some of the biggest winners.

At the opposite end of the spectrum, however, the hospitality and restaurant industries are among those hardest hit.

Among the chain, franchise, and independent respondents, almost nine out of 10 reported an average drop in sales revenue of 36% this year.

“For an industry with an average profit margin of 5% to 6%, this is simply unsustainable,” the report says.

The survey says 17% of restaurants, which equates to more than 110,000 establishments nationwide, have closed permanently.

“What these findings make clear is that more than 500,000 restaurants of every business type – franchise, chain, and independent – are in an economic free fall,” says Sean Kennedy, the association’s executive vice president for public affairs.

Kennedy’s comments were made in a letter the association says it sent Dec. 7 to leaders in the U.S. Congress.

“For every month that passes without a solution from Congress, thousands more restaurants will close their doors for good,” Kennedy says in the letter.

Locally, Spokane developer and restaurateur, Jordan Tampien, says he and many of his peers are working with a pair of economic models for their businesses as it relates to 2021.

“If you could get to 50% dine-in capacity you stand a chance at being able to break even,” says Tampien, who owns or co-owns several restaurants, including Barnwood Social LLC, Brothers Brewing LLC, Checkerboard Tavern LLC, and Too Small to Fail LLC Spokane.

With his business partners, who include his brother Joel and Matt Goodwin, Jordan Tampien says restaurateurs are doing their best to “stay relevant and hang on.”