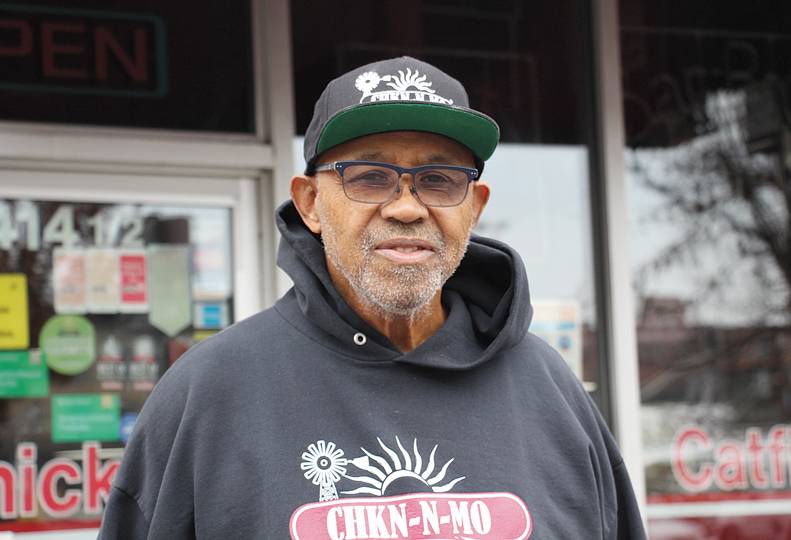 -VIRGINIA THOMAS
Bob Hemphill, owner of CHKN-N-MO restaurant in downtown Spokane, says funding is available and it’s about knowing where to fi nd it and how to apply.

Much of that, Duncan says, is due to the fact that people of color are less likely to have the financial footing to start or expand a business.

“Because, historically, there’s been an issue with people of color being able to borrow money or have assets like homes, (accessing private lending) has been difficult,” she says.

Those who have less personal capital with which to launch their business have a tougher time getting commercial loans, she says. For example, minority business owners are less likely to have the collateral many lenders require.

“They’re at a point of saying, ‘I realize I have this good thing, this product, this idea, and I need a little more support to make it happen,’ but they don’t have what it takes to get the loans,” Duncan says.

“There’s a lot of funding for minority-owned businesses,” Hemphill says. “It’s about knowing where to apply and what’s available.”

Hemphill says that between the U.S. Small Business Administration, banks, and nonprofit organizations, thousands of dollars are available to individual minority business owners.

However, securing a commercial loan can be more difficult than seeking other forms of funding.

“If you want to get a business loan, you have to have collateral,” Cabildo says. “Because of the racial wealth gap, because there’s no generational wealth with multiethnic communities, collateral is out of the question.”

That’s especially concerning in the time of economic turmoil associated with the COVID-19 pandemic, Cabildo says, as the roughly 450 minority-owned businesses in AHANA’s Spokane County directory are typically smaller and financially fragile.

“This pandemic and the economic downturn associated with it have really impacted many of our businesses,” Cabildo says. “Some don’t have the power to remain in business because they have no capital.”

Gilberts says financial institutions should be more dedicated to providing minority business owners with alternatives, such as a commercial line of credit, if a commercial loan isn’t feasible.

Duncan says she’d like to see more banks and credit unions launch mentorship programs for minority entrepreneurs who aren’t necessarily at the point of needing funds but have a business plan that will eventually necessitate approaching a financial institution for capital.

“Let’s start at the beginning, because that way, banking institutions can help them to make the right steps along the way,” Duncan says. “So when they get to the point of commercial lending, they don’t have a bunch of hoops to jump through, because they’ve already been guided to that door.”

Vince Peak, CEO and co-founder of Spokane-based online farm-to-consumer market Share.Farm, is involved in a program through the University of Washington that isn’t far off from Duncan’s mentorship idea.

Peak says he’s currently in a cohort of minority entrepreneurs and business owners working with MBA students through the University of Washington’s Michael G. Foster School of Business. The program, which runs through March 8, pairs each business with a team of MBA students that performs financial assessments, risk analyses, and forecasts, and creates a loan package for the business to submit for bank approval.

“You work with an institution to learn the ins and outs, create a financial timeline, and then execute on the loan at the end of the program—if your business meets all of the marks throughout the program, and you’re deemed fit to receive this business loan,” Peak says.

It’s good timing for Share.Farm, Peak says, as the company has tentative plans to expand in 2022—plans that he declines to reveal, other than to say Share.Farm will require a commercial loan for real estate.

“We’re an 8(a) business, so we work directly with the SBA on a lot of projects currently,” Peak says.

“We’re probably going to go with a 7(a) loan from the SBA, but have our bank help us prepare our documentation for it to improve the odds of success in the process,” Peak says.

SBA-backed 7(a) loans often are used to start or expand businesses.

Peak says his existing relationship with U.S. Bank influenced his decision to involve the bank in the SBA lending documentation process.

So far, Peak says he’s learned the importance of bookkeeping that aligns with standardized financial practices.

“A lot of records aren’t characterized correctly or documented at all, but that’s because a lot of people are unfamiliar with bookkeeping,” Peak says. “This is what the bank is saying is one of the biggest setbacks when trying to lend to small businesses.”