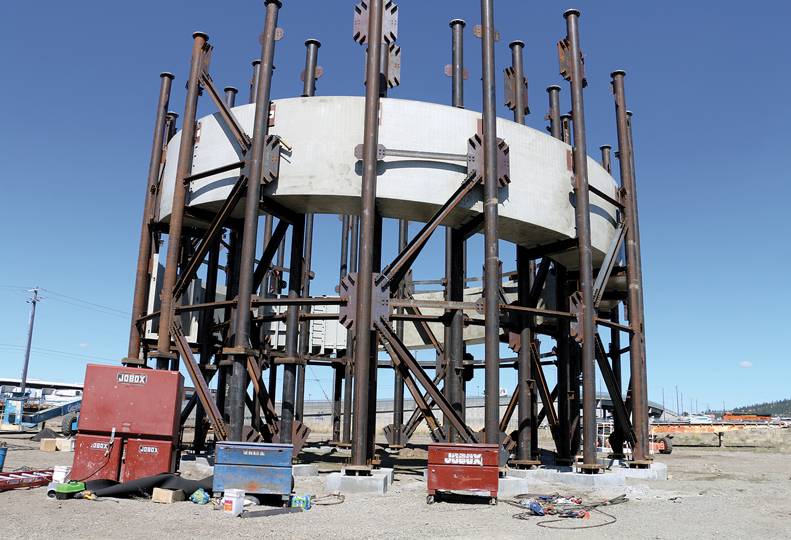 -VIRGINIA THOMAS
The concrete flume for salmon passage will be installed at Cle Elum Dam, in central Washington, as part of a $75.9 million project.

Spokane-based Garco Construction Inc. and the Spokane Valley-based operations of Knife River Corp. are working together to construct a concrete flume for salmon passage at a dam near Cle Elum, Washington.

Blake Johnson, sales manager at Knife River’s Spokane Valley location, says that company has been involved in fish passages in other parts of the state, but this custom precast concrete structure is the company’s first foray into salmon passages.

“We’ve never built anything like it,” Johnson says. “It’s a pretty complex structure for us to cast.”

“We came up with this custom forming system that allows us to pour the pieces upside-down,” Johnson says.

The U.S. Bureau of Reclamation designed the project. In 2018, the agency awarded the $75.9 million contract for the Cle Elum Dam Fish Passage Project to Garco. The Bureau of Reclamation owns and operates the dam, which was constructed on the Cle Elum River about 75 miles northwest of Yakima, Washington, in 1933. The agency and the Washington state Department of Ecology are funding the project through a 50/50 cost-share agreement.

“The Bureau of Reclamation went through a long design phase to find the best means and methods to help the salmon navigate the Cle Elum Dam,” Johnson says. “While Reclamation was doing their design phase, they found that there were very specific requirements needed for the finish of the flume, so that there’s no damage to the salmon or the flume itself for the long term.”

“Normally, when you’re pouring concrete, you get little air pockets,” Johnson says. “But those pockets would allow for degradation of the helical flume and also present potential for the salmon to be injured traveling up the flume. That interior has to be smooth in order to mitigate the potential for damage to the structure and the fish.”

Each part of the salmon passage needs to be sturdy to minimize maintenance needs, he says.

“Once it’s in, the pieces are going to be very difficult to get to 20 or 30 years from now,” Johnson says.

Because the reservoir level can fluctuate by more than 100 feet, salmon need to be able to access the flume regardless of water level.

“The conduits are these really robust box structures that come off of the flume, and they go out into (Cle Elum Lake), so the bottom level is the longest and goes out to the lower level of the lake, and then Garco stacked another section of that, and another on top of that,” Johnson says. “Those feed the flumes as the water levels rise and lower.”

The Bureau of Reclamation says salmon species expected to benefit from the new passage include sockeye, coho, and spring Chinook salmon. Fish will travel downstream by descending through the helix to water below the dam. The salmon passage allows salmon to swim downstream, but not upstream. To transport fish upstream, a trap-and-haul facility has been proposed.

Of the 60 employees working at Knife River’s Spokane Valley location, Chapman says about 20 are involved in the salmon passage project.

Johnson says the fish passage construction market is growing. Most projects are located in King County and on the Olympic Peninsula, in western Washington, but work on similar projects elsewhere in the state is likely to increase, he says.

“Back in the ‘40s and ‘50s, they put in a lot of corrugated metal pipe for roadwork, and that has really obstructed the passageway for salmon to get upstream,” Johnson says. “They’re replacing those types of water features with a wider pattern that’s more conducive to the existing stream bed. There’s going to be a lot more work over the next two or three years, as we begin undoing the environmental impacts that our predecessors put in place 60 years ago.”

Chapman says lawsuits also will have an effect on demand for fish passage projects. More than a decade ago, 21 northwest Washington-based tribes sued the Washington state in a bid to require that the state recognize a treaty-based duty to preserve fish runs, and consequently compel the state to alter or replace culverts that impede salmon migration.

The tribes were successful in the legal dispute. A federal court injunction issued in March 2013 orders the state to increase its efforts to remove culverts that block habitat for salmon and steelhead by 2030.

Chapman says other entities, such as county and city governments, are likely to follow the state’s lead.

“Even some private companies, like Weyerhaeuser and other timber companies, have already been replacing culverts with bridges and other types of fish passage,” Chapman says.

Knife River has created a mockup of the helical flume structure, which Chapman says the company presented to the Bureau of Reclamation on April 15.

“Then the Bureau of Reclamation will have about a month -- hopefully, it takes less than that -- to approve the mockup,” Chapman says. “Once that occurs, then we will then be released to produce the balance of the pieces. There are approximately 100 more pieces of precast that we have to fabricate. We have to have those done in time for a September delivery to the dam.”