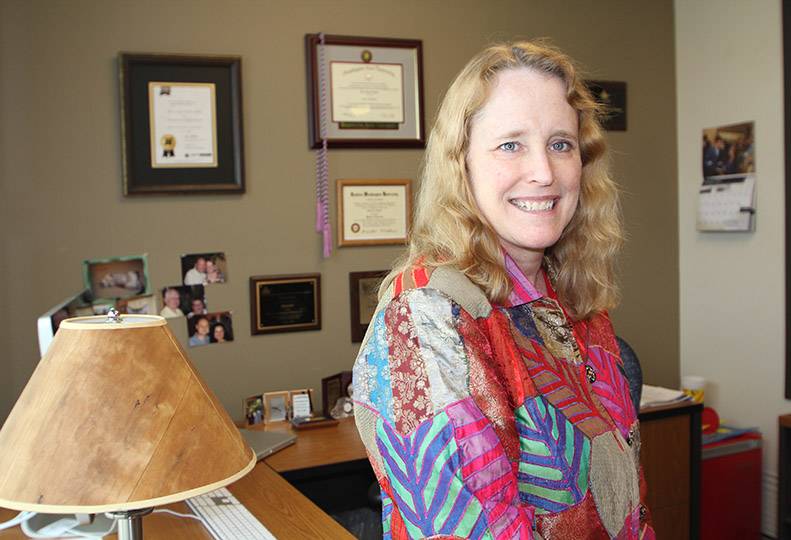 -—Staff photo by Treva Lind
Neva Crogan, geriatric nurse and Gonzaga University professor, says seniors tended to get more protein in their diets when they had more say in what was served.

Senior residents of a nursing home who could rate meals and choose menu items showed healthy weight gain and other benefits under a food delivery system Gonzaga University researcher Neva Crogan has developed.

The elderly residents participating in the six-month study conducted last year at Providence St. Joseph Care Center, at 17 E. Eighth, actually didn't eat a greater quantity of food. Rather, the quality of food they ate improved when they chose the entrees, versus when they dined on meals determined solely by the facility, Crogan says.

For example, residents who chose menu items under the system tended to eat more protein, instead of limiting food intake to a few items, such as bread, crackers, and ice cream, she adds.

Crogan, a Gonzaga University professor and a geriatric nurse practitioner, plans to broaden the research to other Spokane-area care facilities and to distribute the meal delivery system and training she developed, called the "Eat Right Food Delivery System Tool Box." She and a research team tested the system last year.

"Older adults who reside in a nursing home are frail and are at risk for weight loss," Crogan says. "Unplanned weight loss is a predictor for early death and health problems related to weight loss, like anemia, diabetes, pressure ulcers, and falls."

Traditionally, nursing home managers or dieticians select meals, and residents have limited food choices, with dining room entrees served in what may feel like an institutional setting, she says.

"It isn't like a menu where they have a voice on what they would like to eat," Crogan says. "It is unlike at a home where you are actively involved in buying food, planning meals, and you are choosing what you want. Choice enhances your quality of life."

Crogan has another research project under way to study the effect of serving sorbet or sherbet prior to a meal to help nursing home residents who have drug-induced "dry mouth," which is common among seniors who take a lot of medicine. Eating the sorbet seems to stimulate salivation, she says, and residents in a 2011 pilot study increased the amount of food they ate at a meal.

Crogan's overall research focuses on how to improve food intake and quality of life for seniors in nursing homes. She is a long-term care nurse and has a doctorate in nutrition and aging.

Funded by a $200,000 grant from the Alzheimer's Association Foundation, the 2012 study of the Eat Right system measured results before and after its use at St. Joseph. It also compared results with another nursing home here that didn't implement the food delivery system, Crogan says.

The Eat Right system is designed to aid nursing home facilities in making beneficial menu changes based on residents' input, and residents can choose what they want to eat from a menu before mealtime. The system includes keeping food warm using a steam table in the dining room.

Crogan and a research team measured such factors as the amount of food eaten, each resident's body weight, and the individual's protein level based on blood draws tested by a lab, before and after St. Joseph began using the system. Residents who participated in the Eat Right study showed increased body weight and improved protein levels, as well as reported higher food satisfaction compared with residents in the facility that didn't use the system, she says.

She adds, "In essence, it was interesting that the residents didn't eat more as part of the study. We actually measured how much food they ate before and after so we could tell how much they ate in grams of food weighed on the plate. The quality of food they ate improved."

The researchers also tracked the facility's costs for providing the meals that included the cost of equipment, food, staff time, and training. The study found that the facility's meal delivery costs didn't rise after implementing the system, Crogan says.

"At nursing homes, change is a challenge because in order to try new things, they have to take risks and initially, it may cost more money," she says. "Even though the intervention I tested was budget neutral, you automatically assume because the residents get to choose food, it will cost more."

"It went so well they (at St. Joseph) have now implemented the system in all dining rooms on all floors," Crogan says. "The system had started in one dining room."

She adds, "We also measured the residents' satisfaction with the food and meal service delivery. Post intervention, it was significantly improved."

Some residents remain in their rooms to eat and avoid going to the dining room, but improved food choice and meal service may encourage more of them to dine with others, and that social interaction can improve quality of life, Crogan says.

She says the Eat Right system offers training for nursing home employees and options to enhance the residents' food choices and meal service. For example, residents can rate food they are served on a score of 1 to 5, with 5 meaning excellent, over a three-week period to refine menu selections. The food rating is repeated two or three times a year.

"Meals had to score 3.5 or higher to stay on the menu," she says. "It evolves menus so that on a whole, the items most wanted stayed."

As an example, residents asked to remove apple cobbler from menu options, but Crogan says the main reason was that residents said they had received it too often and were tired of it.

The system suggests that as favorite menu items are selected and refined, menus are printed.

Residents can make menu selections a day ahead with help from employees, but they can change their minds about choices once they enter a dining room, where a steam table keeps food warm, Crogan says. The system recommends keeping the steam table near the entrance, and residents can smell the hot food and request staff to bring selected items to their table.

"They can say, 'That smells good; I'd like that,' and still change their minds at the last minute," Crogan says.

For adult children who have older parents they care for, Crogan says they also can be watchful about an elderly person's meals for food quality, as well as protein and fluid intake, to avoid what some people informally call tea-and-toast syndrome.

"They're just not hungry," she says. "The older you get, psychologically you don't need to each as much of food. That's normal as you age, so you're not going to feel hungry, and think, 'I'll just have little bit of toast,' but they're not getting any protein."

Crogan has submitted a request for additional funding from the Alzheimer's Association Foundation to expand the Eat Right study and system for use by multiple nursing homes in Eastern Washington. The grant would fund materials, training, meal service equipment if needed, and research staff to measure outcomes and train a facility's staff.

"We'd like to implement it in at least another five nursing homes," Crogan says.

Meanwhile, she received funding from the American Nurses Foundation to broaden the separate study that is measuring the benefit of serving sorbet or sherbet before meals are delivered at nursing homes. She says two Spokane facilities are participating in the study: Royal Park Care Center, at 7411 N. Nevada, and the Avalon Care Center at Northpointe, at 9827 N. Nevada.

"Older adults take many medications that cause dry mouth, which can impede their ability to chew and swallow food," she says. "The intervention is to give 2 ounces of lemon lime sorbet just before the meal. The study goes through April and includes a larger sample."

She adds, "The residents love it."