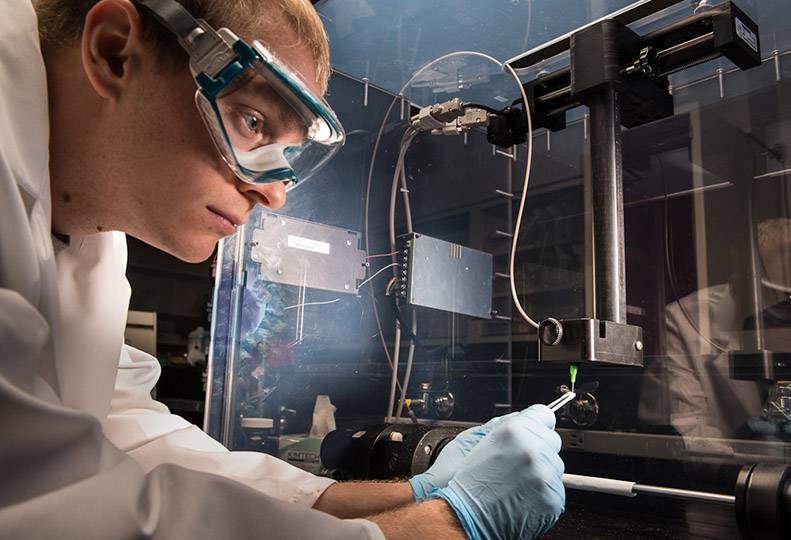 One draw for the startup companies is the potential to apply for HSSA grants that are available to support emerging biomedical companies doing innovative research, says Susan Ashe, HSSA's executive director and its only employee. Ashe works from an office in the McKinstry Innovation Center, at 850 E. Spokane Falls Blvd.

Since being fully organized in 2009, HSSA has awarded more than $3.4 million, a large portion of which it gave in grants last year to support Spokane-based university research in the health sciences. It also includes funds provided to community health programs, Ashe says.

Much of HSSA's available grant money comes from a $10.7 million source of funding it raised in 2011, when it secured bond financing to invest in health sciences research over the next decade.

Iasis Molecular, which is in the process of incorporating under the new name of Novion Technologies Inc., is developing anti-microbial biomaterials and medical devices for wound healing and infection control.

Among the three startup biomedical firms that recently toured Spokane, one has signed a letter of intent to seek HSSA funding, which would require relocation here, Ashe says. She declines to disclose the names of any of the firms, but says two are in the Portland area and the other one is in western Washington.

One is developing electrochemical molecular recognition technology to allow faster, low-cost field tests for food and water safety information, she says. Another is developing a genome visualization tool for oncologists who can use it to view a single cell of a cancer tumor in detail.

"It has the capability of compressing huge amounts of data it can rapidly sort through for the oncologist," she says. "The researcher has figured out how to compress that data with great accuracy."

The third company is working on an approach for rapid development of novel drug candidates to overcome drug resistance, Ashe says.

"If they apply and receive grant funding, they'd have to conduct their business and research in Spokane County," Ashe says. "We made a point to take people to see existing biomedical companies here like Iasis, and to see researchers (at Riverpoint Campus)."

She says HSSA's and GSI's recent outreach to attract other health sciences companies here is gaining some momentum. As part of recruitment efforts, she and Gary Mallon, a GSI industry manager, have talked to industry representatives in Portland, Seattle, and the Tri-Cities, she says.

As a result, several biomedical companies—typically startups with one to 20 employees—are asking about HSSA grants, Ashe adds.

"People in the industry are starting to take note, and because of that, they are inquiring about HSSA grants, which is exactly what we hoped would happen," she says. "We've had a dozen or so inquiries."

In 2012, HSSA awarded a $1.18 million grant to Washington State University health sciences research to fund lab equipment and help attract researchers to Riverpoint, and the university will be opening its Pharmaceutical & Biomedical Sciences Building there this fall.

Earlier this year, HSSA awarded a $200,000 grant to Dr. Kathryn Tuttle, at Providence Medical Research Center, and Cynthia Corbett, at the WSU College of Nursing, for research in medical intervention in transitional care to improve outcomes in end-stage renal disease.

"The comments are very enthusiastic; they didn't realize we had the kind of research talent that's found at WSU, or adequate lab space," she adds.

"A part of what we're doing is to try to invest in the health sciences and grow that industry in Spokane," Ashe says. "In order to do that, you need a robust research university and private sector."

In 2007, the state Legislature passed a law stating that a municipality or county in the state with a population of less than 1 million residents could form a health sciences authority. It authorized that such an HSSA could use a small percentage of the state's share of existing local sales taxes at .02 percent to fund the effort.

The law's intent for an HSSA is to promote bioscience-based economic development and research, and to advance new therapies and procedures to combat disease and promote public health. Spokane County Commissioners won approval to start the HSSA here in 2008 and passed an ordinance to use the allowed .02 percent countywide sales tax to support HSSA operations.

The commissioners also adopted a resolution outlining conditions under which the county would issue bonds to support the new HSSA.

The authority is using 75 percent of its annual revenue from the sales tax income to pay back its bond debt. Of the remaining 25 percent, 10 percent goes toward administrative costs and 15 percent toward funding to increase community access to health care, Ashe adds.

The health sciences authority here can review grant proposals quarterly, and it encourages people to file them at any time. HSAA has three grant categories: researcher recruitment, up to $500,000 a year for two years; research commercialization and job growth, up to $500,000 over grant period; and health delivery research, up to $100,000 a year for up to three years.

David Vachon, Iasis Molecular Sciences founder and CEO, is a member of HSSA board. He says HSSA is playing a pivotal role to help boost economic development for an already large health care sector in Spokane County.

He says the authority's grants help WSU rise a notch higher to attract top scientists here, who bring with them large grant-supported research projects and related employees to be based at Riverpoint. The HSSA combines its emphasis on boosting university research with its support of emerging bioscience companies that are developing advancing health care technologies, Vachon adds.

"It gives us an edge in this economic development process that we've set on," Vachon says.

Ashe says HSSA has a goal with its grants to invest them in a way that provides a catalyst effect, meaning those dollars help match or support what's called extramural funding, from sources such as the National Institutes of Health, Bill & Melinda Gates Foundation, and federal agencies.

"We want to see $100 million of extramural research funding coming to Spokane by 2030," she adds.