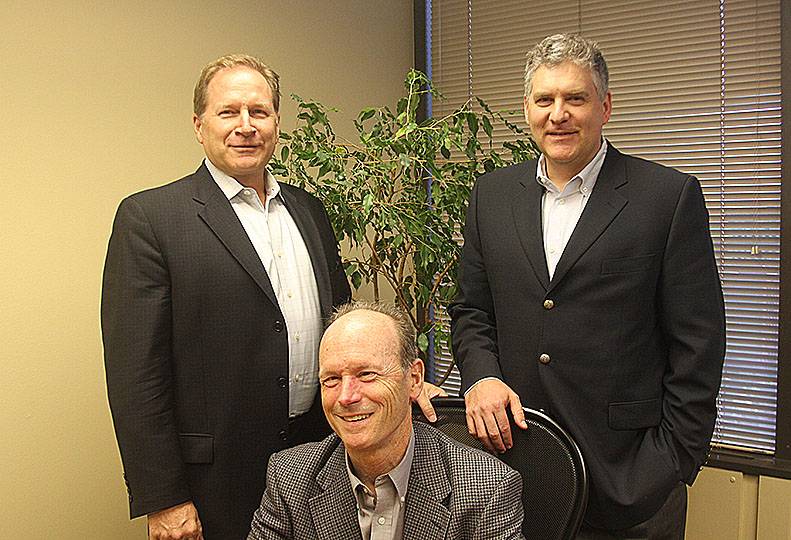 -—Staff photo by Jessica Valencia
Ken Roberts, seated, says he has been planning for seven years to sell his investment brokerage. Barry Menne, left, and Bryn Harman plan to buy the company this fall.

Ken Roberts, president of longtime Spokane wealth-management company Ken Roberts Investment Management Inc., says he plans to sell the company to two employees, a process expected to be completed by this fall.

Meanwhile, a five-year plan implemented by the company calls for it to almost double its assets over the next few years, executives say.

Bryn Harman, senior portfolio manager with the company, and Barry Menne, a recent hire with nearly two decades of financial management experience, will buy all stock in the company, Roberts says, with ownership to be transferred formally in October. Roberts says he plans to continue to work at the firm full time after transferring ownership.

"Succession planning is something every healthy business should do," he says.

With Roberts giving up his ownership interest in the company, Gabriel says Menne and Harman are considering a new name, yet to be finalized.

Roberts founded the company in 1994 and says he started the succession planning process seven years ago. Located on the 11th floor of the Washington Trust Financial Center, at 717 W. Sprague, the company, which has eight full-time employees, manages $270 million in assets for more than 700 clients nationally, says senior managing director Liz Gabriel. It typically handles assets of at least $100,000 for individual clients, she says.

As the company works its way through the leadership transition, it also has continued to grow its portfolio, Gabriel says, with managed assets climbing gradually during the economic downturn.

Roberts says, "We look for opportunities to take advantage when the market doesn't make sense." He adds that when stock prices are low, it makes sense to buy, explaining why assets rose during the downturn.

Ken Roberts Investment Management mostly handles assets for individuals, retail brokerage firms, endowments, and corporations, among others, and has clients in 20 states. Guided by a five-year plan the company implemented this year, Menne says its goal is to almost double its portfolio to $500 million. He says it will seek to achieve that growth by diversifying and growing its client base. Hitting that threshold will help the company garner additional clients, particularly institutional clients, which often take into consideration the total amount of money a firm manages, Menne says.

Gabriel says the company doesn't have any immediate plans to hire additional employees.

"We have a pretty deep staff with the asset level we have," she says, but she adds that as the company's portfolio grows, it might look at hiring additional people in the research and marketing areas.

Gabriel says the company has a long-term lease for its current office, which amounts to a couple hundred square feet, and plans to stay there as the amount of assets it manages grows.

Menne joins a brokerage team with an average of 28 years of experience, Gabriel says. Prior to joining the company, he worked at the Spokane office of ICM Asset Management Inc. for 14 years.

"I'm looking forward to being part of the team," Menne says. "It's really important to have Ken here."

Roberts began his career in the mid-1960s here with Murphy Favre Inc., an investment brokerage that became Washington Mutual Financial Services Inc. in the late 1990s.

Harman and Menne say that Roberts' investment and institutional knowledge is an asset for the company, and will continue to be used while Roberts remains there.

"The main thing is we want to take our legacy and go forward," Harman says, adding that the company will look at creating and implementing new investment strategies over the next few years.

Menne emphasizes that although the company will be under new ownership, he and Harman don't intend to overhaul it.

"I think Ken will see it's going to be a harmonious transition, and we aren't going to see anything change," Menne says.

Roberts says he plans to continue to see clients, and will use his experience in the industry to work on new investment strategies for the company.

In addition to Roberts, Gabriel, Menne, and Harman, the brokerage team is rounded out by Jeff Trudeau, senior portfolio manager for the company.

Trudeau, who has been with the company for seven years, has worked on creating investment strategies for Ken Roberts Investment and currently serves as the company's senior trader.

Trudeau and Harman are chartered financial analysts, Gabriel says, a professional certification that professionals in the investment and finance industries can earn through the Charlottesville, Va.-based CFA Institute.

Gabriel says the investment industry cycles through periods of growth and contraction, and adds that brokerage firms currently are consolidating, by decreasing in size and scope of service.

By diversifying the stock portfolio the Spokane company manages, and by keeping an eye on how other firms are doing, Gabriel says, the brokerage team can safeguard such consolidations.

"That's also important to look at, so when we go through those cycles our revenue streams can remain strong," Gabriel says.