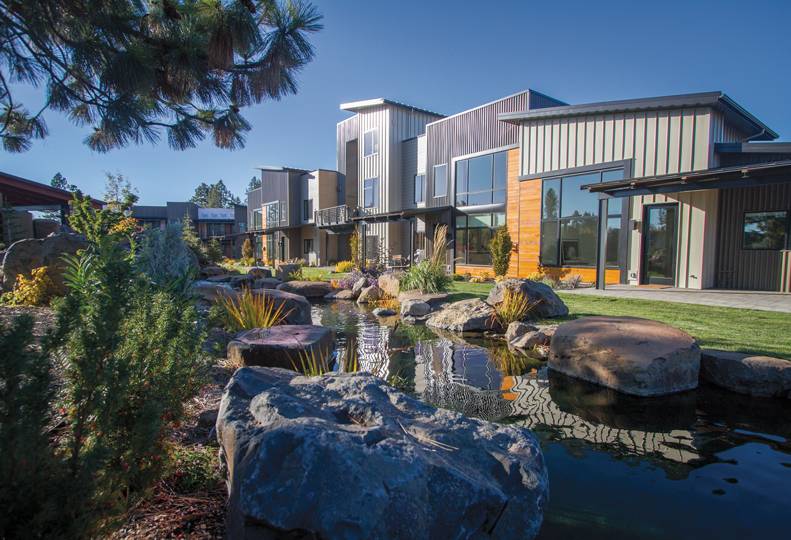 “Typically, the main part of our business is school work, and it seems like that’s slowed down a bit,” Gephart says. “We think school districts are a little hesitant to run a bond in the present climate.”

However, Gephart says Architects West has maintained a steady project volume over the past year, partially due to an influx of residents from outside the area. In addition to projects such as fire stations, city halls, and office buildings, Architects West is doing some multifamily residential work, Gephart says.

“People moving here are generating work for us through a variety of different projects,” Gephart says.

Josh Tripp, landscape architect and owner of Spokane-based Place Landscape Architecture LLC, which does business as Place LA, says he’s noticed residential projects of all types have been in higher demand.

Tripp says Place LA currently is working on about 25% more projects than at this time last year. He expects 2021 revenue will be about 30% higher than the company’s revenue for 2020.

“I thought, if we get another good year, I’m super happy, but it’s shaping up to be even better than last year,” Tripp says.

“At the end of this year, we’re going to be a little less than we were last year,” he says. “Last year was a record year, so that doesn’t surprise me.”

He estimates SPVV’s 2021 revenue will decline slightly from last year, to $1.2 million from about $1.4 million.

Sherry also says much of Spokane’s demand for landscape architecture services can be attributed to an increase in people moving here from outside of the Eastern Washington region.

“They have a higher expectation of what they want to end up with, either in their commercial facilities or their residential properties, and they already recognize what landscape architects can do for them in that regard,” Sherry says. “For the folks from outside of the region who are used to spending (more) money to get what they want, it’s not a big deal. Either that, or they’re coming in with so much money that they don’t care.”

Tripp says he’s also noticed an increase in work from people who typically only have spent a short time of the year in the area but now are spending more time at vacation properties.

“Even though these are seasonal homes for them, a fair number of them have indicated their desire to relocate or move up here and stay longer,” Tripp says. “They want more than what they had before, when it was just a place they were going to be for a month or two.”

Tripp says he was surprised to find that the COVID-19 pandemic had no effect on demand for landscape architecture services.

“I would have thought, especially in the custom residential stuff, that we would have seen some clients pump the brakes on those projects, but they haven’t,” Tripp says. “There’s still a fair number of people who are working from home and focusing on their little piece of heaven.”

Sherry says single-family projects are more likely to include outdoor living spaces that can function for both work and recreation.

“A lot of things that we’re seeing are nicer patios, pergolas, and shade structures,” he says. “It’s more of an extension of your living room. If it’s a nice day, I’m working from home, I’ve got my laptop, I’ve got Wi-Fi outside, I want a nice place to work.”

“We’ve always worked on multifamily projects, but now they seem like they’re coming out of the woodwork,” he says. “We’ve also seen a lot of renovations of existing facilities that maybe haven’t gotten the love they needed over the years, and I think that’s driven by competition in the market to maintain occupancy.”

Tripp says despite rising prices on building materials resulting in a slowdown on construction of some projects, design work has continued unabated.

“The price of materials keeps going up, but people keep building. I don’t know what else stops people,” Tripp says. “On the building side of things, we’ve only had a couple of projects be put on temporary hold because of pricing.”

Tripp says he recently hired an additional landscape architect, bringing the total number of employees at Place LA to seven. He says he doesn’t plan to add more employees this year.

SPVV also has been growing. Sherry says the company currently has eight employees and plans to add up to two more this year to keep up with the workload.

“Things have really just started -- like the trees outside my office right now, they’ve just popped,” Sherry says. “We’ll definitely be picking up additional projects as the year goes on.”