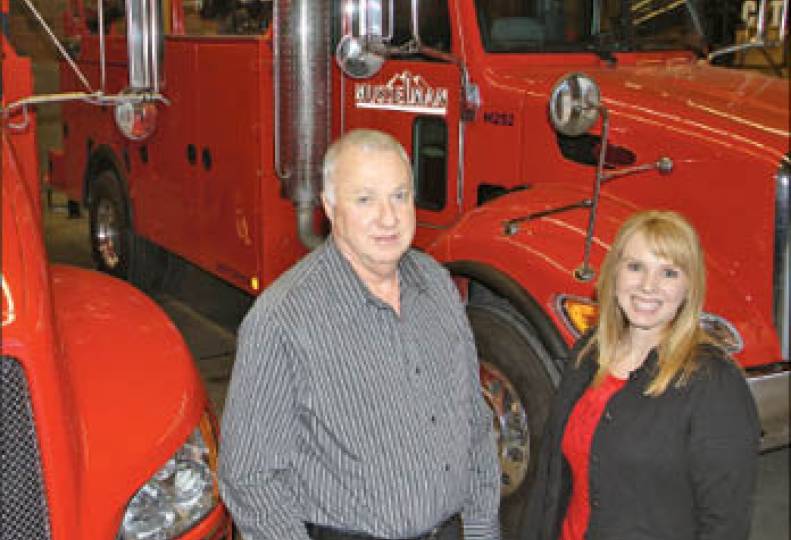 -—Staff photo by Treva Lind
Jerry Musselman and daughter Julie Musselman say the independent Caterpillar dealership expects the rental side of its business to grow during the next five years.

Since its $5 million Liberty Lake building opened in 2011, Musselman Rentals & Sales has attracted some clients who have spontaneously stopped in their travels after seeing the facility and lineup of heavy equipment visible from Interstate 90.

The Lewiston, Idaho-based business that caters to contractors across the western U.S. also takes its heavy-equipment sales and rentals on the road by delivering to its customers at construction sites as far away as North Dakota, California, and Nevada.

The company expects growth in the next five years based on an industry trend of construction companies seeking to lessen capital-equipment expenses.

"We take our equipment wherever our contractors go for jobs," says owner Jerry Musselman. "We tag along whether that's North Dakota, Nevada, or down the street."

As an independent dealer of Caterpillar equipment, the company's facilities in Lewiston and Liberty Lake together offer a fleet of 135 machines available for sale or rent, from tractors and excavators to haul trucks and wheel loaders. Built in 1990, the Lewiston facility at 16915 Hatwai Bypass has similar sales, rental, and maintenance areas as the 23,000-square-foot complex here, at 24201 E. Knox.

Musselman says the company has kept revenue steady despite slow construction activity since 2008, mainly by venturing farther away from the Inland Northwest to serve contractor clients, many who also are venturing greater distances to gain work.

"We've been able to maintain our revenue, but we've had to expand our territory in order to maintain it," he says.

"There is a shift within the construction industry toward renting equipment rather than buying equipment," Musselman says. "Based on the high cost of capital equipment needed to complete projects productively over the past 20 years, that shift toward the percentage of rental equipment has gone from 10 percent to 25 percent, and then to the current 33 percent in the U.S."

He adds, "And it's forecasted to increase to 50 percent in the next five to 10 years. Rental is a real growth industry. The rental business has allowed smaller contractors to complete larger jobs."

The company's clients include a variety of contractors, from small operators to large national companies, including those building wind energy farms, major highway projects, and golf courses, and doing environmental reclamation work, Musselman says. He declines to name specific customers, but he says Musselman Rentals & Sales has many longtime clients.

"Our equipment is primarily for the moving of dirt," he says. "That takes bigger equipment."

He adds, "We have contractors we work with that are involved in pipeline and oil fields. We have a large number of units in North Dakota and eastern Montana. We arrange delivery and pickup to the project sites."

Musselman's parents, Leo and Mildred Musselman, and a brother, Dan Musselman, began the family business in 1974 in Orofino, Idaho, then as a construction company building roads for the timber industry on forest lands. Jerry Musselman joined the family business as a partner with his brother in 1984, after leaving work at a Caterpillar dealership, and their parents retired from the business that same year.

The company relocated to Lewiston when it built the facility there on 7 acres in 1990.

By 1994, the business had switched out of construction and into renting and selling heavy equipment, which included operating a Spokane facility off Freya Street for 15 years until moving to Liberty Lake. Jerry Musselman bought out his brother's interest in the business in 1999.

"The forest road construction was a niche market," Jerry Musselman says. "With the decline of those types of projects due to the environmental movement, we wanted to slow down and enjoy a better quality of life."

He adds, "We switched from being a contractor to renting and selling to contractors, so we've literally stood in our customers' shoes."

The business employs a total of 20 people between both Lewiston and Liberty Lake, which Musselman says are split about evenly between the locations, including some employees who spend part of their time in both places. Jerry Musselman has a residence in Coeur d'Alene and in Lewiston.

"We were able to go from design to construction in 13 months, when typically it would take 18 months," he says. "We had builders and subcontractors readily available."

He adds, "We built the building in Liberty Lake as a foundation to go forward serving the Inland Empire. It's centrally located between Spokane and Coeur d'Alene and has the airport here for the sales side for clients who fly in."

The facility here has an eight-bay maintenance space for upkeep of its fleet, as well as a large reception room and offices for meeting with customers. Musselman says the 5-acre property in Liberty Lake was desirable because of easy access on and off I-90 for delivering and receiving the heavy equipment.

After starting out with 20 pieces of equipment around 1994, the company's fleet size remains stable at just over 130 pieces, mainly because its staff seeks to buy new equipment as the company's inventory sells off, Musselman adds.

He says the company typically buys used Caterpillar heavy equipment that's been manufactured within the past five years and has a relatively low number of hours of use.

"As an independent dealer, we have to source equipment from around the world," he says. "We are cash buyers of newer, late model, low mileage equipment. We buy brand new equipment, too. It's a huge part of our business."

For sales of its equipment, Musselman adds that the company has had buyers from as far away as Australia and South Africa.

He says the company is starting to see a slow-paced improvement in construction activity here as well as in neighboring states. He adds that overall activity seems to have picked up more in a west-to-east direction from Seattle to North Dakota, versus along the north-to-south corridor between Boise and Canada.

"The economy still is not robust in the Inland Northwest for construction," he says. "There's a lot of uncertainty. We're seeing some improvement, but it's at a very slow pace."

A good sign for Musselman Rentals & Sales is when people drive by and see fewer tractors, graders and other machinery parked outside the Liberty Lake facility, because that means the equipment is sold or being used as rentals by contractors at job sites, Musselman adds.

"For us, it's better if you don't see the equipment on the lot," he says. "The facility gave us increased visibility. We've had contractors from Canada just stop in after driving by."

He asserts, "We've established a standard second to none in the industry. We take excellent care of all our assets, including our facilities, equipment, and employees."