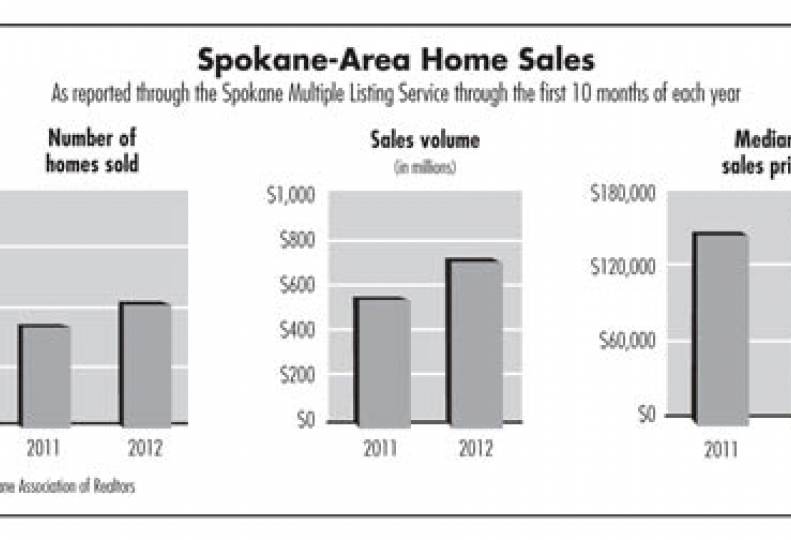 The residential real estate market appears to be starting a rebound following six years of sales declines, and commercial real estate also is poised for a comeback in 2013, industry observers say.

Ken Lewis, owner of Spokane Valley-based Prudential Spokane Real Estate, says the recent recession was more severe than previous economic downturns, but unlike others, this downturn is accompanied by low mortgage interest rates.

"We're beginning with low interest rates to start with, so we'll come out of it faster," says Lewis, who's been in the real estate business for more than 40 years.

He says he's already seeing a rise in activity in the marketplace just in the number of property showings agents are scheduling. That bodes well for next spring, which generally is the peak season for sales.

"The market is just plain busier, and that always leads to something good," Lewis says.

He says he's noticed also that buyer confidence is on the rise. "Attitudes are more positive, and attitude is everything," he says.

"We continue to work our way up," says Rob Higgins, executive vice president of the association. "I think 2011 was the bottom."

The key to the housing market is employment, Higgins says. "If there's job growth, we'll see sales numbers increase more substantially. If there's not significant job growth, I think we'll probably just have a gradual increase for the next few years."

On another positive note, fewer than 20 percent of home sales here over the last seven months have been distressed sales. Prior to that, distressed sales, which include bank-owned properties and short sales, made up as much as 33 percent of sales during the market downturn.

"When a business owner's home increases in value, it makes it easier to make decisions to move forward with the business," he says. "It's more of a psychological thing than a financial nexus."

Black says the commercial market is poised to firm up in 2013, although many landlords are making concessions now to keep space occupied.

"I'm seeing amazing deals from the tenants' point of view," he says.

"The statistics are moving toward a firming of the market," Black says.

In the industrial sector, the surveys showed a vacancy rate of 8.6 percent, down from 10.9 percent a year earlier, although many landlords have reduced their rents to make that happen, he says.

Black says, though, that he expects to hear announcements in 2013 from major manufacturers deciding to open operations in the Spokane area.

"Greater Spokane Incorporated is working with a number of larger companies," he says. "One of the focus areas is recruiting new businesses in the aerospace arena, especially to move to the west side of town."