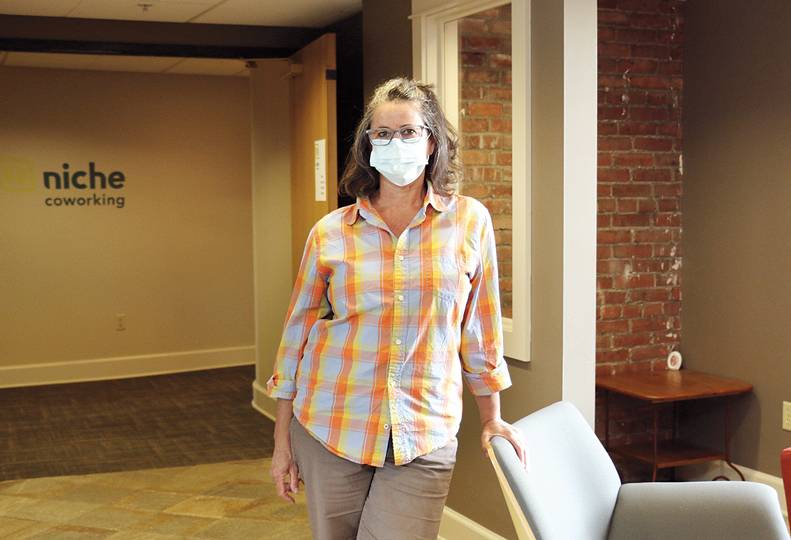 -Virginia Thomas
Dana Oxford, community manager at Niche Coworking, says occupancy has been halved since the onset of the pandemic.

Managers and owners of coworking spaces in the Spokane area say that while occupancy is low due to the COVID-19 pandemic, those who have been taking advantage of such spaces are thankful to have them, and the popularity of coworking spaces could increase as more companies transition employees to remote work.

Liberty Lake Coworking LLC, at 23505 E. Appleway, in Liberty Lake, opened in January. Founder Ann Long says Liberty Lake Coworking fully shut down in mid-March in accordance with Washington’s stay-home mandate. The space reopened after Spokane County advanced to Phase 2 of the governor’s four-phase plan to reopen the economy in late May.

Since then, Liberty Lake Coworking has limited occupancy to no more than five people at a time in the 4,600-square-foot space, Long says.

Liberty Lake Coworking has 11 private offices, six semiprivate offices, an open table space, and two conference rooms. Prices range from $25 per day for drop-ins to $1,305 per month for a suite that accommodates up to four people.

“We put up acrylic barriers around the (shared) spaces, so we can still have the open feel and the camaraderie, but we’re still staying safe,” Long says.

Private offices were popular before the pandemic hit, Long says, and inquiries about private office spaces have increased each week since March.

The company currently has a waitlist for large private offices, which cost $545 a month. Long says interest in coworking spaces has risen because so many people working from home--many for the first time--are getting tired of doing so.

“They don’t have any place to go to get away from … the distractions at home,” Long says. “Maybe they’ve got multiple people fighting for Wi-Fi. Maybe they’ve got their spouse at home, too. They’re trying to coordinate schedules between who can be on the Wi-Fi on a Zoom call and who is doing the parenting duties.”

Dana Oxford, bookkeeper and community manager of Niche Coworking, located on the third floor of the Saranac Building, at 25 W. Main, says coworking spaces provide a much-needed change of scenery for those who have been working from home for months.

“It’s nice to have some other place to go where it feels safe,” Oxford says.

Occupancy at Niche has been halved, she says.

“Usually, I see a handful of people working out of our 15 offices on this floor,” she says.

Now, Oxford is one of only three people who regularly access the space.

“Some people haven’t been here at all. Some people just pop in now and then, and then there are three of us on this floor who are here almost every day,” she says. “We feel safe, because we have about 6,000 square feet on this floor.”

Niche tenants received a 50% discount on rent in April and May, Oxford says. Even after the discounts ended, tenants have continued to pay rent. Demand hasn’t slowed much, and one new tenant joined earlier this month.

Paul Ernsdorff, owner of uWorkSpace, which opened in July 2019 at 804 N. Monroe, says he’s limiting use of the 3,400-square-foot space by requiring people to make an appointment in advance. He’s also allowing only those who have previously used the space to reserve it.

“We’re letting them use meeting rooms, which are normally only for meetings, just to keep people away from each other and make distancing easier,” Ernsdorff says. “People who need a meeting room have been glad that I have been here, so they at least have someplace that they can go to have a conversation.”

“I’ve been keeping a low profile as far as trying to attract new business right now,” Ernsdorff says. “I was planning to push more once Phase 3 comes around.”

“Companies are finding that this remote thing is working pretty well,” Long says. “(They’re) thinking they may have to let go of real estate.”

Employees who no longer have a physical office space with their company but who can’t or prefer not to work from home will drive demand for coworking spaces, Long says.

“With companies trying to downsize their real estate, and people needing space to collaborate and build their social interactions and grow their businesses, it’s definitely going to be on the upswing,” she says.

Oxford contends coworking spaces also will gain popularity because they provide the social opportunities that many people miss when they’re not in an office setting.

“You have your regular people you see every day, hallway conversations, and friendships, but without any office drama,” Oxford says.

Or, as Ernsdorff puts it on the uWorkSpace website: “Your cat is probably bored with being your primary sounding board.”