Vandervert Construction’s modular hotel project to be template for Marriott 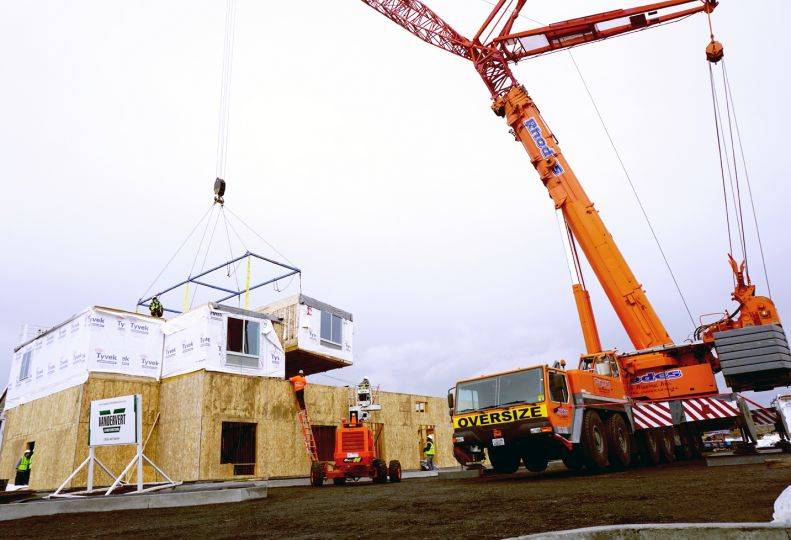 That method is expected to be the template for new hotel construction across the Marriott chain, says Andrea Frye, a Vandervert spokeswoman.

The contractor is erecting the hotel using a combination of conventional on-site construction and modular construction methods, Frye says.

The $11.8 million, 122-unit hotel project is located west of the Palouse Ridge Golf Club on the Washington State University campus.

“All of the units were trucked up to the site and a giant crane was used to put them together,” Frye says.

She says it took a week to put the modules in place.

Vandervert is using conventional construction methods to connect the electrical systems and finish common areas, including the lobby, a restaurant, conference rooms, a spa, and a fitness center.

That time savings can be significant, because the project will be open for the peak lodging season this year, Frye says, adding that the hotel wouldn’t have been ready this summer under a conventional construction schedule.

She says modular construction, with its precise construction in a climate-controlled factory setting, has a green, or sustainability, aspect.

“There is a significant reduction of material waste,” Frye says. “They’re able to be precise, and there’s no weather delays.”

Denver-based Stonebridge Cos., which owns and operates 45 hotels nationwide, is developing the project.

Frye says Marriott representatives have come from all over the U.S. to see the modular construction method.

“Now there are several (under development) throughout the country using the modular method,” she says.

Vandervert stands to land some of those construction jobs, she asserts.

“We’ve priced several with both traditional and modular construction,” she says. “It’s been a great opportunity for us to show what we’re doing is as good as or better than conventional-only construction.”