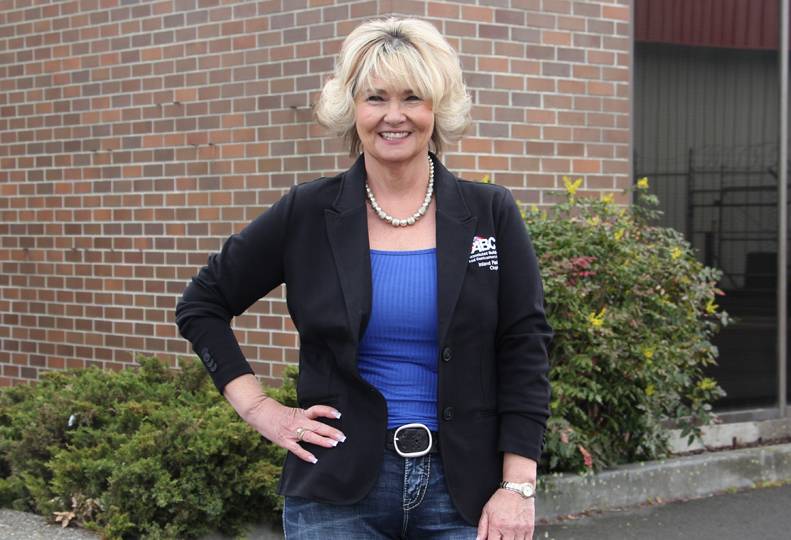 A lack of promotion of the construction industry in schools has led not only to a shortage of workers, but a dearth of women in the industry, some women in construction and trades here claim.

At the national level, about 9% of all construction employees are women, according to the Occupational Safety and Health Administration. It’s unclear exactly where Washington ranks, but Brooke Baker Spink, director of business development at Baker Construction & Development Inc., says she’s noticed a distinct lack of women in the industry.

Baker Spink says the fact that the industry is overwhelmingly male dominated plays a part in discouraging women from considering careers in construction, but that’s starting to change.

“There’s that stigma that still exists that this is a man’s world, but it’s exciting to see that those stereotypes are consistently being beat down,” she says.

Much of the problem, Baker Spink says, lies in a lack of awareness as to what kinds of jobs are available and what skills are required.

“There are so many great opportunities in this industry, and we need to do a better job of getting the word out there and getting it out early,” Baker Spink says.

When women do enter the industry, most of them don’t wield power tools or drive heavy machinery. More than 86% of women in construction are in office positions, such as sales and management, according to the U.S. Department of Labor.

Suzanne Schmidt, president and CEO of the Inland Pacific chapter of the Associated Builders and Contractors trade association, says young people often perceive jobs in construction to be backbreaking careers.

“For both men and women, younger people thinking about the field are looking at it as it’s going to be hard work out in the elements. It’s going to be very physically demanding,” Schmidt says.

That’s true in some parts of the industry, she says, but many construction jobs have become easier due to technological advances in tools and equipment.

“Construction is not all about using a shovel and swinging a hammer – it has come into the 21st century,” Schmidt says. “The younger generation is all about ... technology, and there is a lot of interesting technology being used in the construction industry.”

A shortage of trade workers means lucrative opportunities abound for women interested in construction and related industries. Keeley Friesen, co-owner and CEO of Spokane-based elevator service company Vertical Options LLC, says few people—and only one woman—have expressed interest in the company’s elevator mechanic apprenticeship, even though starting pay for journeymen at Vertical Options is about $57 an hour, and about half that for apprentices.

“I’d love to see women get those opportunities,” Friesen says. “There’s beginning to be more emphasis placed on the trades at the school level … I’m glad to see how things are changing.”

One of the ways local construction companies are trying to encourage women to explore a career in the industry is through an annual event called Pizza, Pop, and Power Tools. The event, which usually happens in April, but was canceled due to the COVID-19 pandemic, is sponsored and hosted by more than 20 businesses and organizations. Schmidt says the event is tailored to girls in eighth grade.

“We get them out and show them how to use a drill, how to weld, things that they can see and maybe think, ‘This is something I could do,’” Schmidt says.

Friesen says the earlier girls can be introduced to the trades, the better.

“I think the only way it’s going to be interesting to them is if it starts at a younger age,” she says. “By the time they’re old enough to work, they’ve already formed their thoughts around what they’re interested in.”

“It might help if we gave people that recognition, like: This person works as an electrician, they do this, this is how they got through the program and this is what they’re making, this is their lifestyle,” Schmidt says. “That’s what I think is (missing), to take those people who are working in the trades and recognize them as somebody really special, that they’ve done something, special and they’re making a good life for themselves.”

Baker Spink contends women who pursue construction careers must be willing to keep their ego in check and work harder than male counterparts.

“I was able to gain respect by being vulnerable, willing to learn, willing to dig in, and to really learn my particular delivery method,” she says. “Just because of that traditional hierarchy and stereotype about this being a man’s world, women have to out-hustle their competition to prove that they deserve a seat at the table.”

Despite the obstacles, Spokane’s construction industry seems to be more accepting of female employees than companies in the industry elsewhere, Baker Spink says.

She says, “Once you prove yourself and you can prove that you know what you’re talking about, people are quick to listen, and they’re excited to work with you.”