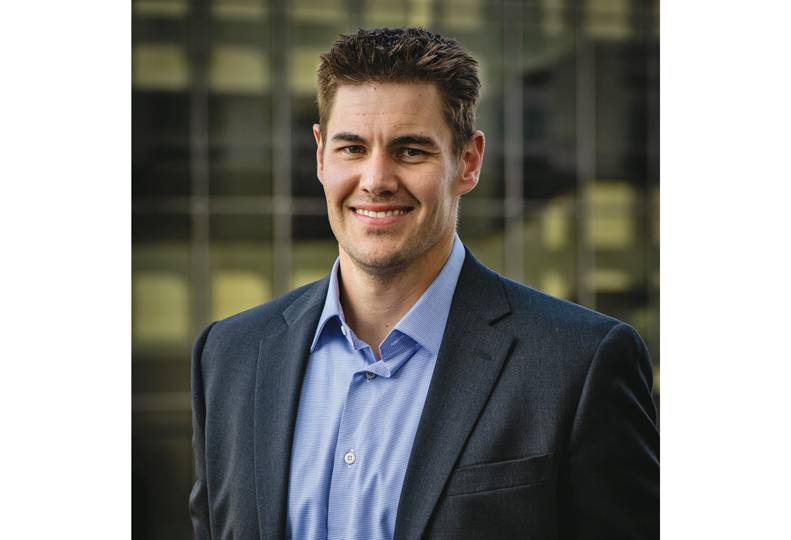 Ask Adam Jackson, Mountain West Bank’s assistant vice president of professional and commercial lending, how he arrived at this place in his life and you’ll hear more about others than you will about him.

Growing up on Spokane’s South Hill as the son of Dave Jackson and Cynthia Beaulaurier, he had an attorney for a father and certified public accountant for a mother.

“My dad brought me everywhere, events, meetings; that was very impactful for me,” says the 35-year-old Jackson.

“Having a family that was a part of the business community was huge,” he says. “I learned from my grandfather (Charlie Jackson) that you want to be the guy who knows a guy.”

Jackson will tell you that being married to Holly, a pharmacist, has helped him establish a niche of clients in the dental and medical sectors.

“In listening to her and getting to know the health care industry on a more intimate basis, I could more effectively build relationships with people in the field,” he says.

One of those people is Dr. Joshua Cochran, owner of Dr. C Family Dentistry, at 13514 E. 32nd in Spokane Valley, and one of three people to nominate Jackson as a Rising Star.

Cochran credits Jackson with taking his idea to start his own practice and making it a reality.

“He’s successfully guided me and my practice through partner buy-ins, real estate transaction, and total corporate restructure,” says Cochran in his nominating email.

Jackson says his education background has proved to be helpful in establishing a rapport with clients and customers.

He graduated from Ferris High School, earned his bachelor’s degree in psychology with a minor in finance from Seattle Pacific University. He graduated from Leadership Spokane this year and was selected to co-chair the annual gala for the organization. He plans to return to school this fall to begin working toward his MBA.

“I think the psychology degree helps give me a baseline for where people are coming from,” he says. “It helps me meet them where they are, and it makes (you) more approachable.”

Says Jackson of commercial lending, “People are looking to us for help and guidance. … This is a trust business.”

In addition to imparting upon him a business sense, Jackson’s family taught him a spirit of serving the community.

Dave Jackson is one of the founding board members of Spokane Hoopfest. Adam has been an annual volunteer since the first tournament in 1990. He’s also currently a board member for Boys & Girls Clubs of America.

“It’s not a resume builder,” Jackson says of volunteering. “Again, I attribute that to my family. Dad was a chairman for March of Dimes, and he’d take me to meetings. We were volunteers for Spike & Dig (volleyball tournament); it’s what we did.”

Volunteering for Meals on Wheels through a local service organization and delivering meals and poinsettias to seniors and the shut-in during his youth still stand out.

“It was such a simple gesture, but you could see on their faces it meant so much,” he says. “Those early experiences really helped shaped my outlook on life. I learned that what you put out you get back 10-fold.”