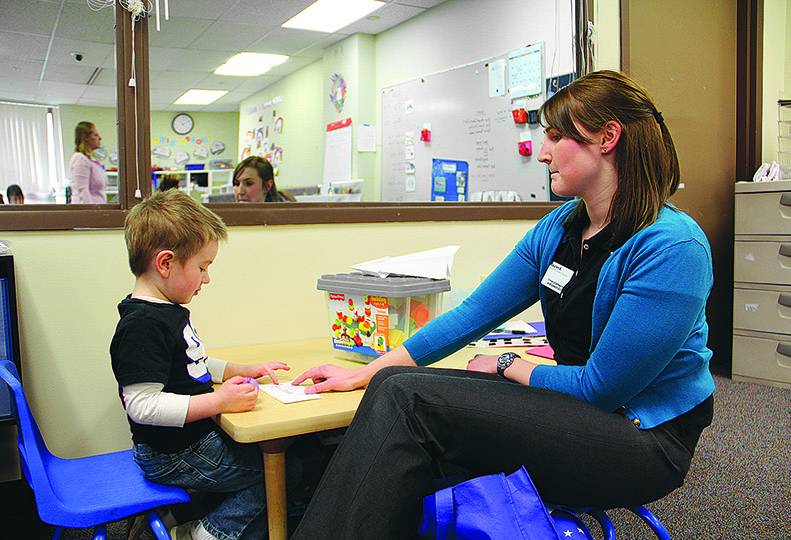 The program, called the Domino Early Learning Center, also is open to students in Eastern Washington University’s department of communication disorders as part of collaboration between the two universities.

The student program launched last September, says Georgina Lynch, an assistant clinical professor in WSU’s department of speech who provides the training at Domino. However, Northwest Autism Center, which provides support services to both children and adults with autism, has offered what’s known as the Domino Program here since 2005.

Dawn Sidell, executive director of Northwest Autism Center, located at 25 W. Fifth, says that prior to September, the Domino Program contracted with private speech therapists to come to the Domino classroom at EWU  to work with children. The only students working in the program at that time, she says, were volunteers and work-study students.

“This was the first contract for speech and language pathology students to get practicum experience in Domino,” Sidell says. “We were really happy that this department (at WSU) was enthusiastic about taking that on.”

The goal of the Domino Early Learning Center, which is located in Martin Hall on EWU’s main campus in Cheney, is to use speech, language, and behavioral therapy techniques to help children with autism.

Autism is  a complex neurological disorder that appears at birth or in early development. Autism impacts behaviors like language and communication of ideas and feelings, imagination, self-regulation, and relationships. It’s known as a “spectrum” disorder because no two people with autism display the exact same symptoms; some may have  deficits in only one or two areas, whereas others require full-time care and assistance.

Statistics recently released by the Center for Disease Control estimate that 1 in 68 children in the U.S. is affected by autism.

“The hallmark deficits with autism are language and communication,” Lynch says. “Our goal is to teach initiation of verbal speech or communication.”

Two graduate students are selected per semester for the program, typically in their first year of graduate school, Lynch says. Currently, there is one student from EWU, Lauren Burrows, and one from WSU, Ming-Yeh Hsieh. The two also take a graduate-level course on autism in tandem with the practicum, to help further their understanding of the disorder.

The program currently has seven children, Lynch says. The ratio of children to student clinicians and staff is one-to-one; the children are taught in a group as well as individually with a clinician or staff member.

The graduate clinicians work with the children two days a week alongside certified behavior analysts, occupational therapists, and special-education teachers from Northwest Autism Center, and the families of the kids in the program.

Domino accepts children as young as two years old and works with them until age five.  Most of the children enter the program around age three, Lynch says. Sometimes, children of a similar age who don’t have autism are brought into the classroom as behavior models, Lynch says, to help show the children in Domino what acceptable behavior looks like.

Sidell says that the costs for most of the children enrolled in the Domino program are covered by the school districts, which can contract Northwest Autism Center to provide services. The districts typically conduct an evaluation to determine if a child has developmental delays that would make them eligible for special preschool services, she says.

“If a child has an established delay, they are eligible for early intervention services,” she says. “It used to be from age 3 to 21, but now it’s from birth to 21.”

“Almost all the children are under school contracts now,” Sidell says.

Domino runs five days a week year-round, with children spending about five hours a day there. In the classroom, the graduate clinicians and Northwest Autism Center employees focus on using visual cues to encourage the children to use words, Lynch says.

“We use language enticements, such as toys and activities, and a variety of cueing systems to help them make verbal speech,” She says.

For example, during snack time, a clinician or staff member will show a child two picture cards, one with a glass of water and the word “water,” and another with a picture of food and the word “snack.” The clinician will prompt the child to select which one he or she wants.

Some children enter the program already able to communicate with single words or sentences, Lynch says, and some come into it not speaking at all.

“We have kids who started in September completely nonverbal now putting two words together,” Lynch says. This is a huge victory, she says, as many children with autism have trouble asking for things.

“Kids with autism won’t tell you what they want; they’ll just wait,” she says.

In addition to helping the children to initiate verbal communication, Lynch says the program focuses on building their vocabulary, “so they can identify things in their environment.”

She says the program also works on fundamental functional skills that the children will need in school, such as sitting still and paying attention. Each day at Domino begins with circle time, which involves  the children sitting in a circle and listening to an instructor, Lynch says, something that many of the children had trouble with at first.

“When these kids came in the fall, even being able to sit still was a challenge,” she says. “So our circle time has gone from 2 minutes to 15 minutes.”

Lynch and the graduate clinicians also make visits to the children’s homes and work with the parents to help them understand and communicate with their child, Lynch says.

Lynch says some of the children in the program now are able to communicate at a level within one year of their peers. When a child nears the end of the program, staff and clinicians at Domino meet with educators at the school the child will be going to and discuss the next steps, she says.

“Some will probably not be fully integrated,” she says. “We work with the school system to develop goals, and work with the families as well. Part of it is visiting with the team that will work with that child.”

Lynch says graduate clinicians working at the Domino Center will have the option to participate in the 12-week clinic.

She also says that early-diagnosis intensive intervention can be the key to helping a child with autism develop communication skills.

“Those first 90 days are critical,” she says.

Lynch says that the average age of autism diagnosis is 5 years old, but it can be diagnosed as young as two. Some early signs to watch for include not gesturing, looking away, not smiling, playing with toys in a nonfunctional way, tantrums that are inconsolable, and not adapting to change.

Pediatricians will screen for signs of autism at every 18-and-24 month checkup, Lynch says, which can help lead to earlier diagnoses.

“Pediatricians are now much more proactive in looking for those signs,” she says.