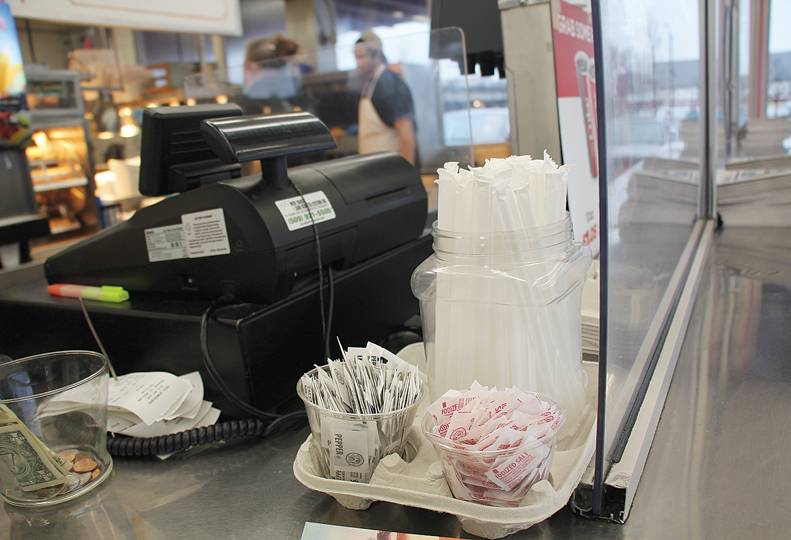 -VIRGINIA THOMAS
Employees at Dick’s Hamburgers, in Spokane, have set up a self-serve station near their order windows, enabling customers to take what they need, rather than having to request it.

Restaurant owners here say they’re struggling to adapt to a state law that regulates how single-use food serviceware is provided to customers.

“I’ve spent years convincing my home meal-replacement team members and my lead managers to put all that stuff in,” Siemens says. “Muscle memory kicks in, and they start reaching for forks and napkins.”

As of Jan. 1, restaurants in Washington are prohibited from providing single-use serviceware proactively, but instead must provide it only upon request from a customer. A restaurant can provide a straw and lid with a drink that’s provided through a drive-thru window, and customers can choose their serviceware and condiments at a self-serve station.

The law covers single-use items such as forks, knives, spoons, chopsticks, cocktail picks, straws, condiment packets, and sauce cups. Also restricted are plastic cold-cup lids, except for those provided through drive-thru windows or at events with a fixed-seat capacity of at least 2,500 people. Napkins aren’t regulated in the new law.

After the COVID-19 pandemic precipitated a dramatic increase in the use of to-go orders and accompanying serviceware, the Washington state Department of Ecology studied how plastic packaging is managed in the state and evaluated policy options that could reduce food service-related waste and pollution. Ecology’s report to the state noted that decreasing plastic to-go items would also relieve some pressure on existing recycling systems.

The legislation was sponsored by 16 senators, who introduced it in January 2021. It made its way through the Senate and the House before it was signed by Gov. Jay Inslee on May 17, 2021.

“What the state’s trying to do is nudge behavioral change by asking people to ask for utensils,” Dunau says. “I don’t know if the state’s tried that before, so I’m curious to see what, if any, result that has.”

Dunau notes that restaurants here may lack information about the kinds of materials that qualify as single-use. For example, some may believe compostable utensils are an acceptable alternative to plastic.

“Actually, for those utensils to be compostable, it needs an industrial composting process to break down, and that’s not available in our region of the state,” Dunau says.

There could be some cost savings to restaurants as customers become accustomed to the law, Siemens says.

“If I don’t have to give forks because my guests didn’t want them, I’m happy to save those dollars, because that supports my operation,” he says.

Mustard Seed has a restaurant at Northtown Mall, in Spokane, and at the Missoula Southgate Mall, in Missoula. Siemens also owns the Noodle Express Airway Heights, at 10408 U.S. Highway 2.

Derek Baziotis, Spokane chair for the Washington Hospitality Association and owner of Bene’s restaurant at 24 W. First, in Cheney, says he’s been dealing with confusion from his employees.

“It throws a kink in how we do our business,” Baziotis says. “When I tell my employees, you have to ask about silverware, (their response is), what do you mean? Is that every order? Just to-go? Do they ask me? Do I have to tell them to ask me? How does that work?”

Customers are sometimes unaware of the law, Siemens says.

“It puts us in a bit of a bind, because if a guest has always expected that we would put forks and napkins in for them, and now, in theory, we’re not supposed to, they get home and they don’t have what they need,” Siemens says. “There’s definitely some worry for our industry now that we can’t anticipate that need, do we end up with a bit of backlash from our guests who are frustrated because we’ve now changed how we operate? Or even worse, they don’t enjoy their experience as much, they have a negative result from it.”

“The general public often doesn’t know they have to ask for these things,” Suor says. “It’s led to dissatisfied customers.”

Suor says he’s frustrated by what he says is a lack of communication from the state to restaurants and to customers.

The Washington state Department of Ecology, which is tasked with handling the enforcement of the law, has provided some information about the law on its website.

Dave Bennett, an Olympia-based spokesman for the state Department of Ecology’s solid waste division says enforcement initially will be focused on education, rather than penalization.

“We do want people to comply, but we understand that this is a big change,” he says.

It’s an adjustment for Ecology, too. Bennett says the department doesn’t have additional resources to enforce the law.

Bennett says Ecology is keeping a database of reports of businesses that have violated the law. Reports are made to Ecology’s enforcement team via the department’s website.

“If we continue to get reports about a food service business repeatedly violating, that would trigger a letter just to make sure they understand the law, and possibly a phone call as well,” Bennett says. “If we receive repeated reports, there is an option for penalties of up to $250. That would take several reports.”

Bennett notes that the single-use serviceware ban is part of a phased approach the state is taking toward decreasing food service waste. In 2024, food service containers--including clamshell packaging, cups, and bowls--made from expanded polystyrene will be outlawed.

Siemens describes the reaction of the restaurant industry and of some customers to serviceware legislation as “growing pains.”

“As we get more strict with the policies within the store, and the customers become more educated, maybe that transition will become easier,” he says.