Lafferty-led nonprofit looks to lead students to their job paths 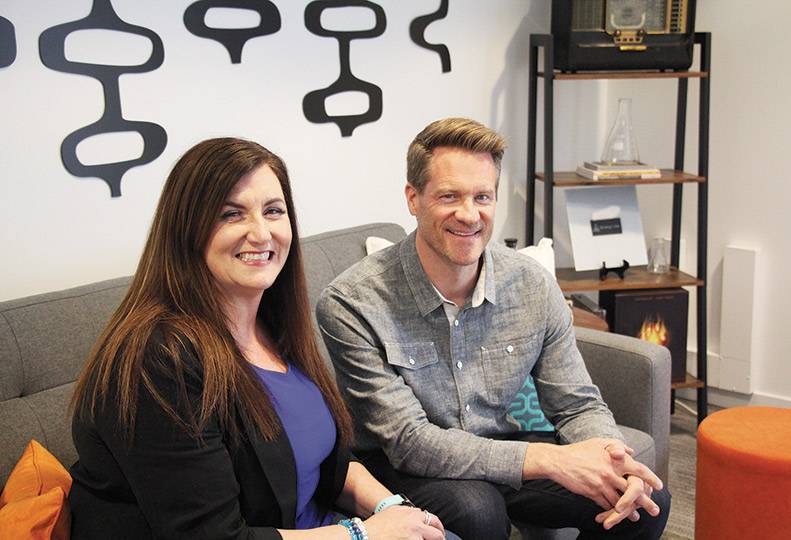 On a mission to help young people discover how their skills and interests can help decide which career to aim for, Spokane entrepreneur Tyler Lafferty has started Slingshot, a nonprofit professional training and coaching program.

“This is a form of workforce development that also helps employers,” says Lafferty, who’s also a co-founder of Spokane tech companies Seven2, a digital creative agency, and 14Four, an advertising services company.

Lafferty says he’s been talking to classrooms for 25 years to help students discover workforce opportunities outside of the traditional careers such as teacher, doctor, and firefighter.

“They don’t really think about so many other amazing and cool jobs that are out there, and oftentimes kids just take the path of least resistance and go into a profession that their parents were in or that someone they know is in,” he says.

Lafferty authored a book titled “Be More Like You,” after receiving positive feedback about his classroom discussions. That led to an idea for a coaching company that would teach the principles from his book.

Lisa White is a former director of afterschool programs and STEM summer camps for Spokane Public Schools. She first met Lafferty in her role as director of career and technical education for the district and invited him to speak to students about career goals as a way to bring real-world businesspeople into classrooms. White says after reading Lafferty’s book, she suggested pivoting from a for-profit coaching company to a nonprofit in order to serve individuals who wouldn’t be able to afford the coaching.

“This problem is very real across all socioeconomic backgrounds. The idea of ‘what am I going to do with my life?’ and the stress and anxiety that can come along with that question,” Lafferty says. “I didn’t feel like there was any need to have this as a for-profit, because I just wanted to be able to reach kids and help them figure out their plan for the future. So that’s where Slingshot was born.”

He says the two began brainstorming while White was still employed with the school district on plans to start the nonprofit. “We talked about how if we make a go of this then you’ve got to quit your job and come on to the nonprofit to be the executive director and really make this happen. I was able to convince her this would be a good idea.”

Lafferty hired White as Slingshot’s only paid staff member so far. White previously worked for Spokane Public Schools for the past 28 years in a variety of roles including over 20 years as director of career and technical education.

She says, “All my passions that I had when I was working for the district aligned with Tyler’s vision of kids following their passion and loving the work that they do. So when I read the book, I just knew that we had to do this with kids.”

Slingshot has two media interns and also works with five members on its board of directors, including Lori Hunt, provost at Spokane Community College; Kristin Goff, president of Wendle Motors; Jerrall Haynes, civil rights coordinator for the city of Spokane; Shelly O’Quinn, CEO of Innovia Foundation; and Lafferty.

The nonprofit expects to generate income by charging for its coaching courses, including a potential licensing fee for schools to incorporate the curriculum into the classroom. Slingshot also will seek sponsorships to fund its operations from industries that want to support workforce development programs.

Revenue from Slingshot’s services will help pay for coaches and administration costs, Lafferty says. Slingshot’s prices range between $295 for online coaching courses to $980 for a six-week direct coaching course. Lafferty says those prices are for those who can afford it. He explains that his goal is to provide scholarships to at least 50% of participants in both the six-week course and online course programs.

Slingshot also will operate through support from sponsorships, which Lafferty says the nonprofit will seek from foundations, businesses, and companies in finance, energy, manufacturing, health care, and aerospace.

“We have some sectors that have already committed funding to us because they know it’s workforce development for them,” White says. “It’s a powerful strategy because when kids identify an industry, we have partners saying, ‘We will be right beside you to be the first people to talk to kids.’”

“Working with them was unbelievable. The kids had such good reasons to do this work and make it happen,” Lafferty says. “We did that as a pilot so they didn’t have to pay for anything, but in the future our goal is whenever we partner with a school district that there will be some sort of a licensing fee or something like that through the school district.”

Lafferty and White both say the school partnership is a collaboration between the nonprofit and the school.

“Really, we’re aligning with the agency that we’re working with. At Lumen, we actually work with the school counselor and career and college coordinator together,” White explains.

At Lumen, Slingshot collaborates with career and college coordinators to provide students with an elective class for career development. Slingshot is providing services to Lumen at no charge this school year. Lafferty says he’s looking to make the elective permanent for students and is seeking funding to continue the program at Lumen High School.

Slingshot is based in the Seven2 and 14Four office building, at 244 W. Main downtown.

Lafferty says the nonprofit’s name is derived “from the idea of propelling young people into the future. A slingshot will propel something where you’ve aimed it, and that’s what we want kids to understand. If you put in the time, effort, and energy to create a plan with the frameworks we’ve developed, then you can go in the direction you want and create purposeful direction.”

Slingshot has scheduled an informational meeting for parents, community members, and young people to learn about its programs. The meeting will be 6:30-8 p.m. April 26, both online and at Lewis and Clark High School, at 521 W. Fourth, in downtown Spokane.

Lafferty says he wants to grow Slingshot’s operations to be integrated into all schools in Spokane County, before opening up to the entire state, and then eventually offering its programs nationwide. More information about Slingshot’s coaching programs can be found on its website, at helloslingshot.org.

Lafferty says Slingshot is interested in recruiting more coaches, including diverse coaches, to work with the nonprofit. “We already had one cohort of coaches, and we see this as an ongoing thing. Our ability to scale will be about getting people involved who want to be coaches and who want to be paid coaches with us.”

With White’s experience and Lafferty’s vision, people between 15 and 25 years old will follow Lafferty’s own IDEAS framework to help them discover which industries and job types they can be passionate about.

“It was based on my experience as a businessperson and looking at it from that angle but also about how to work with kids and empowering kids to connect with businesses and validating their future and ideas,” Lafferty explains.

IDEAS is an acronym for introspection, design, exploration, adaptability, and service, Lafferty says. Each word represents steps for participants to follow. For example, introspection has students focus on understanding themselves better and identifying industries that sound exciting for a potential career.

In the design phase, students will focus on understanding the companies as well as the people that do that type of work in those industries then create a plan on who to talk to.

Exploration requires participants to go out and hold informational interviews, job shadows, and internships or apprenticeships.

Adaptability calls for students to self-reflect on the path they’ve taken so far and to change directions if it’s not working out.

The last phase of the IDEAS framework is service, which involves making connections to the community through purpose, passion, and fulfillment to their vocation.

“What we found is so many kids want this. They know it’s necessary. They’re feeling the pressure of trying to figure it out, they just don’t have a concrete plan for how it works,” Lafferty says.