Some nonprofits plan to preserve virtual element of fundraising events 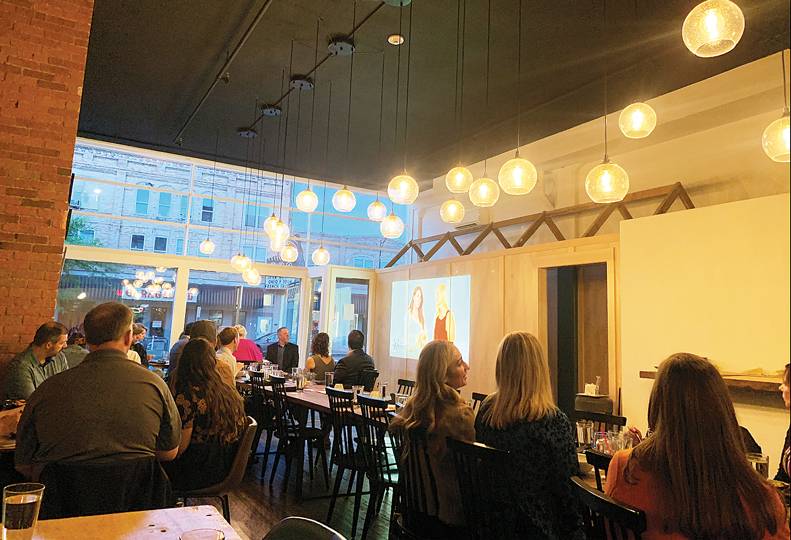 -Cancer Can’t
Cancer Can’t held one of its mini-parties at the Hunt restaurant, in downtown Spokane, as part of its hybrid event earlier this year.

Going on two years into the pandemic, local nonprofits still are having to decide if their fundraising events will be held in-person, virtually, or a combination of both in order to meet their campaign goals, representatives of some organizations here say.

For a few nonprofits, hosting an event with a virtual element, or completely virtually, has been a welcome experience. For others, scheduling a virtual event hasn’t been an option.

Becky Van Keulen, volunteer executive director for Spokane-based nonprofit Cancer Can’t, says the organization added a virtual auction feature to the annual Cancer Can’t auction in 2017, which familiarized donors and sponsors with a virtual auction method ahead of the exclusively virtual event in 2020. Last year’s event was held online due to the pandemic-related shutdowns, while this year’s fundraiser involved mini-parties—rather than one large event—and an online auction.

“If you could get something out of it like a fishing trip, or a spa package, people were willing to do the silent auction, and our numbers were actually better for that,” Van Keulen says.

Another advantage of hosting a virtually is that guests who don’t live in the area also can join.

“Now anyone from anywhere can bid, and we’ll mail you the gift certificate. It does open up the ability for people to participate,” she says.

Sponsorships increased this year and allowed for more revenue to be brought in from the items, she adds. For example, Jonathan Sweatt, owner of Republic Pi and Flying Goat restaurants, provided a venue space and donated food to cater one of the mini-parties, which reduced overhead costs for this year’s Cancer Can’t auction.

Hosting an in-person event requires a larger budget for overhead costs as well, Van Keulen says. The event space itself is expensive and that’s not including the added costs of catering or entertainment.

Van Keulen says that Cancer Can’t also had a difficult time asking some already struggling restaurants to cater an in-person event for all of the guests.

The annual Cancer Can’t auction featured a virtual auction and organized guests in mini parties around the region to watch and celebrate in houses or at restaurants with each other.

Fox says a virtual element is likely to continue to be a permanent part of future fundraising events, “especially when you look at the auction portion.”

Auctions held in person may not raise as much as a virtual auction, because a virtual auction can send reminders to bidders’ phones if they get outbid, and there are fewer social distractions virtually as well, Fox contends.

Providence pivoted to standard fundraising campaigns, without an in-person or virtual element, last year in place of the in-person events the nonprofit would normally host. A fundraiser called The Pour, which is a food and wine event scheduled in June 2020, was canceled and replaced with a gift card campaign.

Sponsors of The Pour redirected money to purchase meals from local restaurants that were struggling and delivered the meals to front-line caregivers, with the remaining funds going to a patient emergency fund to cover medication, transportation, and medical equipment that wouldn’t be covered through insurance.

The downside to a virtual event, however, is “how to translate the elegance,” she says.

Providence’s Pumpkin Ball was held virtually last year, which allowed the charity to stretch a one-night giving event into a four-to-six-week fundraising campaign. Yet, without an in-person element to the campaign, “We raised about half of what we would normally raise through an event,” Fox says.

This year, Providence will offer meals for guests of the Pumpkin Ball to pick up at the Davenport Grand Hotel, where they can also vote on the annual pumpkin carving contest and have an opportunity to purchase a fairytale tote gift bag to bring home. The virtual element will feature a live broadcast, a live auction, and a paddle raise. During a paddle raise, guests are asked to raise their paddles to contribute money that will go directly to the organization.

Fox says there are about 300 registered attendees so far, but she expects a flurry of last-minute registrations for the virtual element in the days leading up to the event.

At Ronald McDonald House Charities of the Inland Northwest, however, the types of events the charity produces don’t convert to a virtual format, says development director Bob McLean.

“The telethon is about as virtual as we get,” McLean says.

McLean says the Denim & Diamonds ball replaced the nonprofit’s annual polo tournament, which was canceled due to poor air quality and concern for the safety of the horses and riders. A virtual version of event wasn’t an option, he says.

Instead, Denim & Diamonds, which was expected to be an indoor event, quickly reached capacity at Northern Quest and the organization had to pivot the event to an outdoor setting at the resort, McLean says.

Denim & Diamond guests line danced to a local country music band on a chilly Friday night in October, participated in games and activities including corn hole and a mechanical bull riding and roping competition, which awarded commemorative belt buckles to the winners.

“How do you ride a mechanical bull virtually? How do you do a sporting clays tournament virtually? We don’t have the capacity for the events to do them virtually,” says McLean.

McLean says he considers the Denim & Diamonds event a success.

“I think so many people were excited to get out and go to an event,” he says.

“When you’re at the physical auction, there’s a level of peer pressure, when you’re sitting at a table and you’re physically there with other people,” she says. “At the end of the day, we definitely did better in 2021 than we did in 2020. Having some kind of in-person connection made a huge difference for us.”