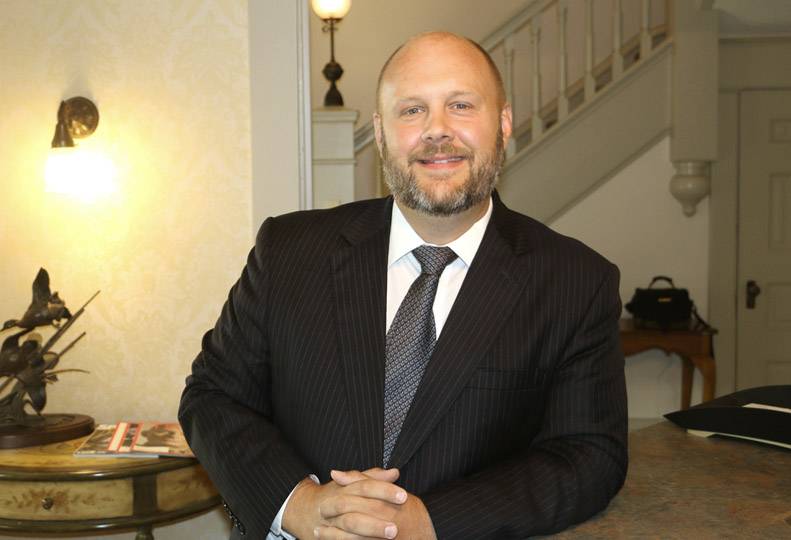 Of all the reasons to be in a courtroom, being there to defend a client is one of the best, contends J. Brendan Kidd, owner of Spokane-based criminal justice firm, Kidd Defense PLLC.

“My job is to fight, and I see that as a great position to be in,” he says. “I’m not there to judge the client, I’m there to mount the best defense possible.”

The two established what they now call the Grace Law Center in the 2,800-square-foot building, which sits at the northwest corner of Adams Street and Mallon Avenue, a block northwest of the Spokane County Courthouse.

Kidd and Note each operate their respective practices in offices on the first floor, and lease the upper level’s three office spaces to other attorneys.

Although Kidd and Note share one subcontracted office assistant, he says his practice doesn’t otherwise employ any other staff or associates.

Licensed to practice in Washington, Kidd says the majority of his cases are based in Spokane, Stevens, and Whitman counties, and most of his clients are referred to him by fellow attorneys or former clients.

Although he always enjoyed studying the law, Kidd admits he didn’t originally see himself becoming a criminal defense attorney.

“It’s a fast-paced job, and I’d say a bit more personal than how it’s portrayed on TV,” he says. “But at the end of the day, I feel like I’m able to connect with clients regardless of the crime they’re accused of.”

Originally from Roblin, Manitoba, Kidd earned a bachelor’s degree in history and political science from Iowa State University and his law degree from Gonzaga University.

The 35-year-old spent his first 10 years as an attorney working for Cooney Law Offices PS before starting his own practice.

“Cooney was a great firm, but they’re also family run,” he says. “It was important to me be able to experience owning my own firm.”

Last year, Kidd was selected for the National Trial Lawyers Top 40 under 40 listing. He also was also named a Top Lawyer in Criminal Defense by Spokane Coeur d’Alene Living magazine.

Kidd says he doesn’t charge clients an hourly rate, preferring instead to determine a flat fee based on the work involved in each case.

“If I had to estimate an hourly rate, I’d say it’s probably somewhere around $250 an hour,” he says.

Although he declines to disclose his firm’s annual billings, Kidd did say things are going well so far.

“We’re off to a good start, with business above where I expected us to be,” he says. “This line of work tends to follow levels of law enforcement staffing, so things do vary a bit depending on the season.”

Kidd estimates he usually has up to 50 open cases at any given time, and completes between 100 and 150 cases total each year.

Kidd says the most common types of cases he sees are DUIs, which he says can sometimes be more complex to defend than most people think.

He says DUI cases usually take between four and six months to resolve, because each includes court appearances and large amounts of evidence, as well as a Department of Licensing administrative process.

“The initial hearing covers release conditions and the scheduling of a second court date,” he says. “Meanwhile, there’s an investigation into the client’s history of drug and alcohol use, and a determination of whether or not they’ll lose their license.”

Kidd says DUI case outcomes range from total dismissal of charges on up to jail time and fees. He says the majority of clients who are convicted of a DUI usually do end up losing their license for a time.

“It’s all driven by the facts of the case and the client’s prior history,” he says.

He says being familiar with the network of prosecutors and judges that try DUI cases also is helpful when negotiating on behalf of his clients.

“For some clients losing their license is a career ender, so it’s important to be able to find a solution that works for everyone,” he says.

Kidd says another tool that can be useful for both sides in trying a case, particularly DUI cases, is video technology.

“Over the years, we’ve begun to see more and more technology-based discovery,” he says. “It takes longer to review cases, but overall that information can be very useful to both sides.”

Kidd says that at least half of the DUI cases he works on use video from dashboard or body cameras in legal proceedings.

Kidd says this past July, the state of Washington made changes to the laws concerning DUI offenses. Under the new law, an offender’s fourth DUI in 10 years counts as a felony, and such an offender can be sent to prison for more than a year rather than serving a shorter sentence in county jail.

“It used to be the fifth DUI in 10 years counts as a felony,” he says. “The change is a cost saving measure, as you start to see second time offenders being given house arrest rather than jail time, and those who’ve offended more times going straight to prison rather than county jails.”

Kidd says in recent years, the demand for private attorneys has decreased, with most clients choosing to work with public defenders.

“I’d say only about 40 percent of people hire private attorneys,” he says. “Public defenders are more readily available. They’re also free (to the offender), so you’ll see lots of people who’ll chose that route because it’s easier and less expensive.”

Kidd says on average, most DUI cases cost a client between $2,000 and $3,000, with possible additional fees if the case goes to trial.

“Of course, the more serious the charges, the higher the cost will be—likewise, if we need to hire an expert witness or special investigator,” he says.

Kidd says the advantage to hiring a private attorney is that clients are able to choose someone they’re comfortable with, who has more time to devote to case research.

“We can’t guarantee a better outcome, but we do have more time to spend because of the smaller case volume (than a public defender),” he says. “We’re able to pay attention to more details and plan for various outcomes.”

While most of the cases he tries are DUI related, Kidd says the rest are usually a mix of various felonies, including misdemeanors, assault, domestic violence, sex, and property crimes.

“Crime is cyclical,” he says. “Which type you see the most of at any given time can depend on what season it is and other factors.”

Anecdotally, Kidd says he doesn’t feel crime in Spokane has increased much over the years he’s been in practice.

“I wouldn’t say crime has gone up a whole lot,” he says. “I have noticed an increase in overall filings for felony offenses since Larry Haskell became Spokane County’s prosecuting attorney. Some of those cases had been on the back burner for a while, but he’s gotten things moving again.”

Looking ahead, Kidd says he doesn’t have immediate plans to grow his firm, rather his main goal is to expand into different practice areas.

“I may eventually add more staff or a second attorney,” he says. “But my current goal is to be able to try federal cases.”

While most district and state court cases are routine and smaller, Kidd says federal cases often involve far more man hours, and as such most are appointed.

“Most federal cases that are tried here are larger drug conspiracies or cases of government fraud,” he says. “But having the diversity of being able to try those cases would be a good thing for my business going forward.”