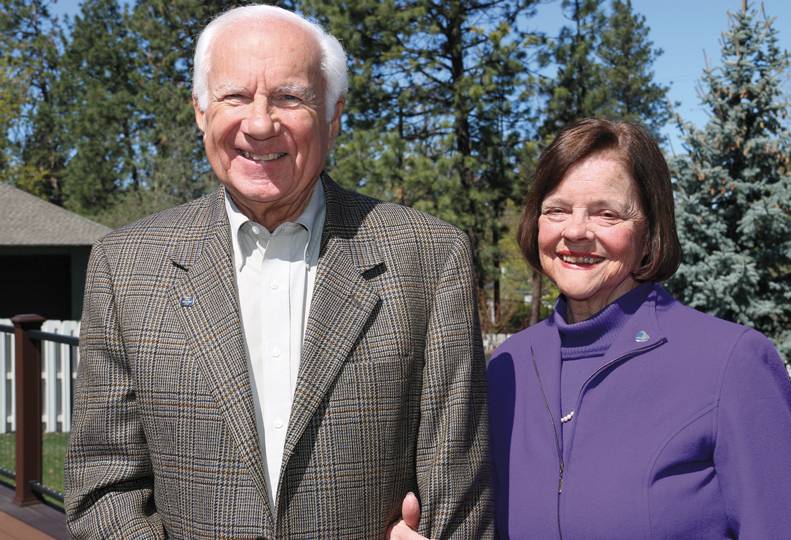 Dick and Carol Wendle, both 79, say they’ve made a good team throughout nearly 55 years of marriage.

The Wendles say they have a passion for giving back to youth and the community. Those around them notice the ripple effects that continue to make an impact on both their family and their company, Wendle Motors Inc.

Chud Richard Wendle, who goes by Dick, is the son of Wendle Motors co-founder Chud W. Wendle, who partnered with Wayne Stoddard to open a car dealership in downtown Spokane in 1943 with 24 employees.

Dick began there as a lot boy, “I started working when I was 13 at Second and Jefferson when it was called Stoddard-Wendle,” he says.

Carol Wendle has a degree in sociology from the University of Idaho, where she met Dick. After receiving a teaching certificate from Eastern Washington University, Carol became an elementary school teacher—first in Seattle and then in Spokane—until the couple started a family.

“As much as I loved teaching, it was hard to quit, but I loved being a stay-at-home mom. When I look back, it was an amazing opportunity; where I got to start doing a lot of volunteer work in a variety of different areas, mostly education- and children-related. That’s my passion,” Carol says.

While Dick didn’t graduate from Idaho, he continued his education in marketing through the Ford Motor Co. He made key decisions that proved to be essential to the survival of Wendle Motors. For instance, in 1964, he successfully convinced former Spokane Mayor Neal Fosseen and the Spokane City Council to grant a land-use request to allow the dealership to move to the area now known as the Northtown Square retail center, across Division Street from NorthTown Mall.

Another vital move was made in 1995, when Dick purchased 18 acres of property at 9000 N. Division. He credits that as an important decision that helped the dealership survive the economic recession in 2008.

“We built the shopping center and moved out to the ‘Y’ because the economy was in the ditch. So, we had to consolidate. That was a pretty important move,” he says.

While Dick was focused on the company, Carol says she was approached in the 1980s to help create an education strategy for the Momentum ’87 initiative. She says it was exciting to volunteer with the initiative, describing her sentiment as, “this feeling that we had to get things going again – get that engine reignited.”

Momentum was a community initiative founded by Spokane-area business leaders that sought to increase jobs and wages after sustained economic growth failed to occur following the initial excitement of Expo ’74 more than a decade earlier.

“Spokane was just totally wiped out with the economy and everything,” Dick says. “It was bad.”

Carol says Momentum’s education strategy was, “to have the very best schools possible,” to support the initiative’s goals.

“We had a report card on schools and dropout rates with different areas that we might need to be focusing more on,” she says. “It brought the area school districts, both public and private, together, working closer.”

Their son Chud Wendle, 53, is the executive director of the Hutton Settlement, a long-term alternative home for children ages 5 to 18. Carol was a member of Hutton’s board of trustees for 39 years before retiring about six years ago. Carol and Dick, as well as Wendle Motors, provide financial support through capital campaign donations and event sponsorships.

Chud Wendle says for the nonprofit’s centennial celebration in 2019, his parents “underwrote the picnic for the big family reunion where we had well over 500 people on campus.”

Carol says she was especially proud to join the board for the Joint Center for Higher Education where she worked closely with Dave Clack, a 2019 Icons honoree, to build a higher-education campus in the University District.

Carol also volunteered her time in support of educational opportunities for the community through her service on the boards for Spokane Public Schools and Whitworth University.

Thomas Tilford, a retired entrepreneur and former neighbor of the Wendles, says it seems the Wendles “are more aware of and thoughtful about what needs support in the community because they live here.”

Their daughter Kristin Goff, 51, who is the current president of Wendle Motors Inc., concurs. “They’re really good at seeing the need and then designing a vision and putting together a plan to make it become a reality,” she says.

A tangible example that showcases the Wendles’ commitment to youth and volunteering is the Andrew Rypien Field, at 3105 N. Regal, in Hillyard, which opened in the early 2000s.

“Every corner of town had a sports complex but that corner,” Carol says.

Their children also played youth soccer. “That’s where I think we developed this love for what’s happening with youth sports in Spokane and why the Rypien field became a huge goal to get,” Carol says.

“We went out and knocked on doors to raise money,” Dick says. He and Carol, who co-chaired the capital campaign on behalf of the Spokane Youth Sports Association, raised $2.1 million to turn the former Spokane Junkyard, which was also an Environmental Protection Agency-designated Superfund site, into a 20-acre sports complex with soccer fields.

Goff says the experience her father gained operating the dealership through times of economic downturn and recovery has helped steer the way she handles the health and safety of employees and customers through the pandemic. “It’s awesome to have my parents to lean on and get advice from them on how to navigate,” she says.

After a career spanning more than six decades, Dick retired in 2016 and daughter and son-in-law, Kristin and Shayne Goff, took over management of the dealership. Dick describes his title in retirement as the head cheerleader.

Chud Wendle says that even though his parents are retired, “It seems like they’re involved with everything. They participate whether its Second Harvest or child safety seat checks.”

Carol had a stroke that impacted the right side of her body in October 2007. She describes the stroke as significant and says she hasn’t driven since it happened. “I always thought I’d be able to do it again; but my wings have been clipped,” she says.

Wendle Motors sold about 1,040 new cars last year, according to information provided for the Journal’s New –Car Dealers list, published in March. At that volume, the North Side dealership ranked third, in terms of sales, out of 25 new-car dealers in the Inland Northwest that appeared on the list. The dealership also employs 433% more people than it did in 1943, with 128 full-time employees as of March 18.

The Wendles give credit to their employees and to the many volunteers they’ve worked with for their success.

“I respect the various talents people come with so much,” Carol says. “Things wouldn’t have happened without the working together and the respecting of each other’s expertise. It’s so humbling, and I’m so thankful for the people who we’ve worked with.”