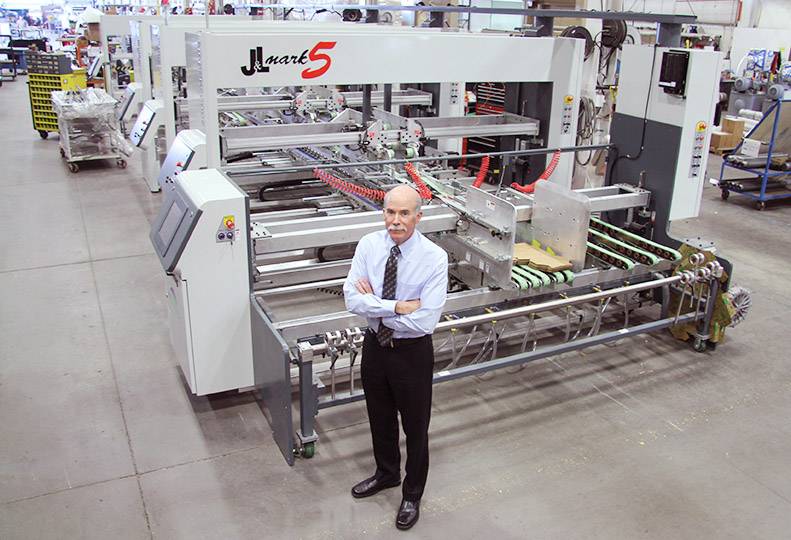 Alliance Machine Systems International LLC, a Spokane Valley-based manufacturer of products and services for the paperboard packaging industry, is rolling out the latest model of one of its machines for manufacturing specialty cardboard boxes.

“(This version) has enhancements,” Duchesne says. “It’s a more integrated system, while still retaining an open architecture, which makes it easier for operators to run.”

The new J&L machine will be demonstrated at an open house hosted by Alliance on Sept. 13 at its 80,000-square-foot facility at 5303 E. Desmet.

“We will be running some birdhouse boxes, a box that folds into a birdhouse, to show the capabilities to produce specialty boxes on that machine,” Duchesne says.

The folding and gluing machine consists of individual modules, with each performing a different manufacturing task. The first is the feeder, where eight vacuum-assisted belts feed the material into the machine. Next, the material travels into two identical folding modules for front and back folding. The following module applies glue and any final folds as needed to the box. Lastly, the delivery module carries the boxes to a compression module, which stacks them.

Currently, the company manufactures products for its U.S. customers at the Spokane Valley location, and manufactures for its European market in Holland. It also has a manufacturing facility in Romania, Duchesne says.

“The company has been in businesses for about 30 years through predecessor companies,” he says. “Today, we operate around the world, providing … box manufacturing services to large and small companies that are in the business of making corrugated containers.”

“Our customers are supplying corrugated containers for anybody who makes anything or ships anything, from pizza boxes to refrigerator boxes,” he says.

The price for one of Alliance’s systems can vary, depending on the size and options the customer wants, Duchesne says. On the low end, a customer might pay about $50,000 for a machine, he says, and on the high end, up to $1 million.

Duchesne declines to disclose specific revenue numbers for the company, but says overall it’s doing well. Looking into the future, he says that the company’s overall goal is to significantly increase its product lines and sales volumes during the next five years.

“I would hope that we can do a lot of it with the space that we have,” he says.

“So (our products) basically take banks of corrugated board and condition them and feed them from a stack into a converting machine,” he says. “Then, they take it away from the converting machine … and palletize them to make a palletized load, which can then be shipped by truck or whatever means to our customer’s customers.”

Some of the company’s machines use robotics technology, Duchesne says, which also will be demonstrated at the open house event.

“Our equipment allows customers to increase their throughput on their production lines, so they get more boxes per hour and have more control of the material into the converting line,” he says.

In addition to its flagship folding and gluing machine, the company introduced last year the UltraPAL system, a modular, high-speed palletizer. The modules of the machine can be mixed and matched, depending on the customer’s product mix and speed requirements, Duchesne says.

Beyond selling equipment to customers, Alliance also provides a range of parts and service support, he says.

“We have a store of space parts and also have service people, some of which are located around the country,” he says. “We do telephone troubleshooting, or directly connect via a Web port to look at the equipment in real time.”